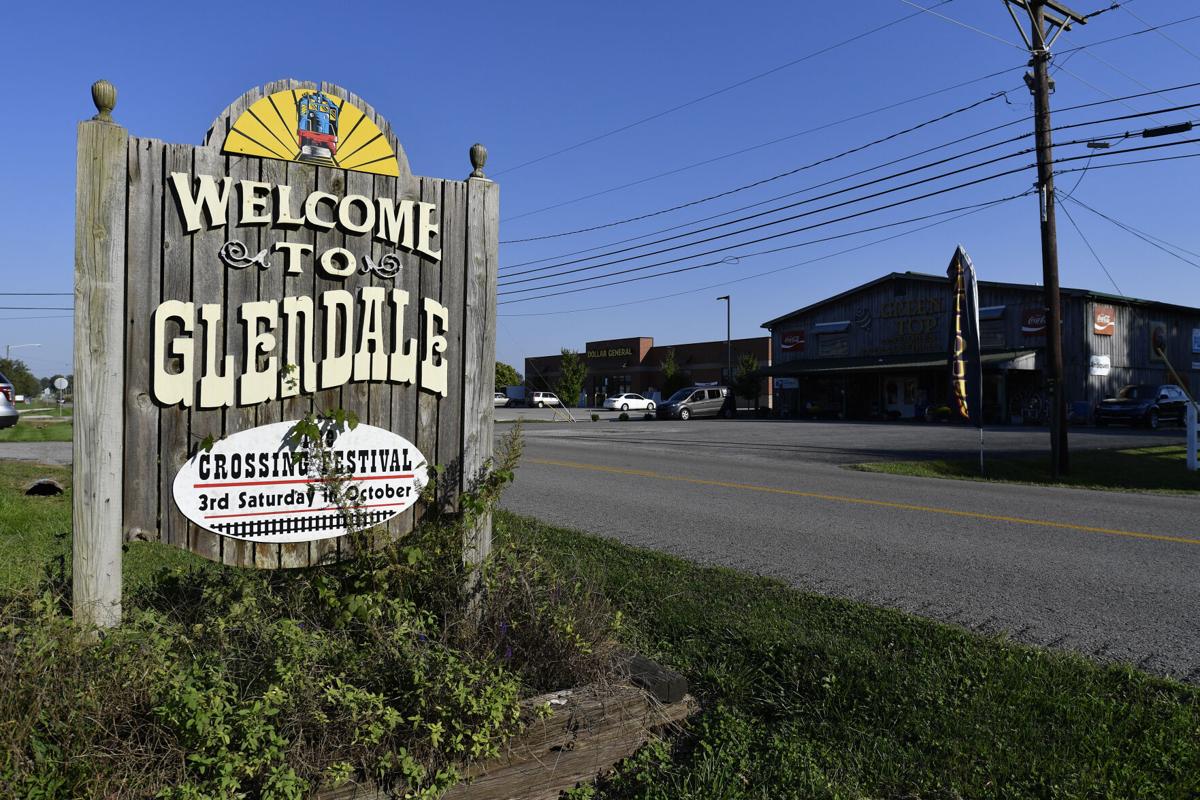 A sign welcomes visitors to the tiny town of Glendale, Ky., the site of a joint venture with Ford Motor Company and SK Innovation to create the $5.8 billion BlueOvalSK Battery Park in Glendale, Ky., Monday, Sept. 27, 2021. The dedicated battery manufacturing complex will be creating 5000 jobs, and is intended to supply Ford's North American assembly plants with locally assembled batteries. (AP Photo/Timothy D. Easley) 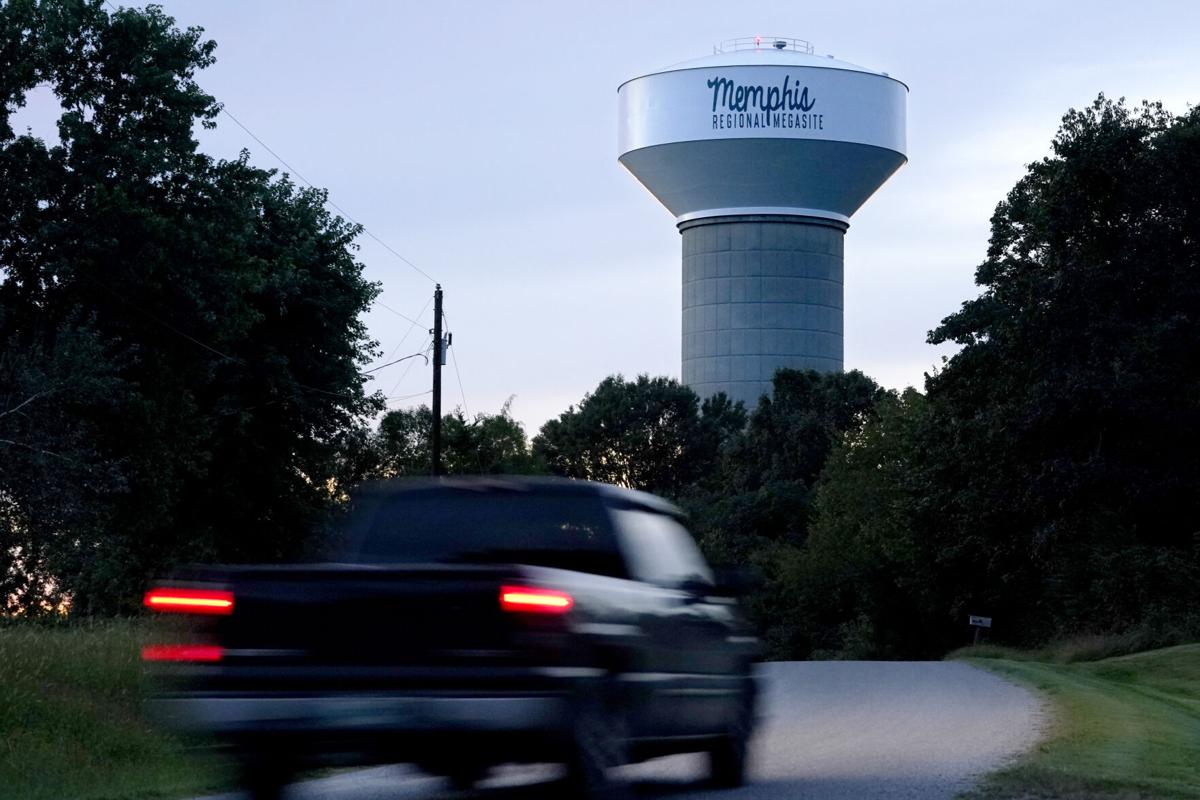 A truck drives down a rural road near a water tower marking the location of the Memphis Regional Megasite on Sept. 24, 2021, in Stanton, Tenn. Ford Motor Co. and SK Innovation of South Korea plan to build three new electric-vehicle battery factories and an auto assembly plant by 2025 in Tennessee and Kentucky. The industrial site in Stanton will be the location for a factory to produce electric F-Series pickups and a battery factory. (AP Photo/Mark Humphrey) 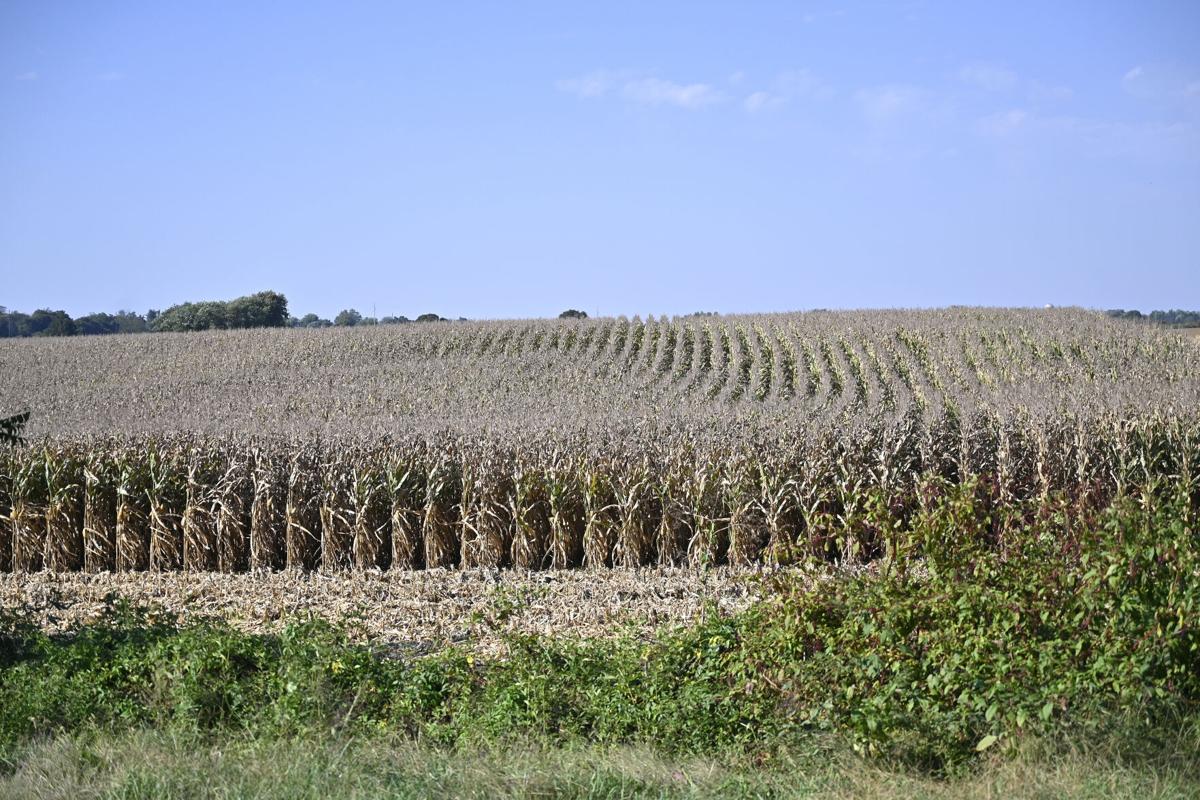 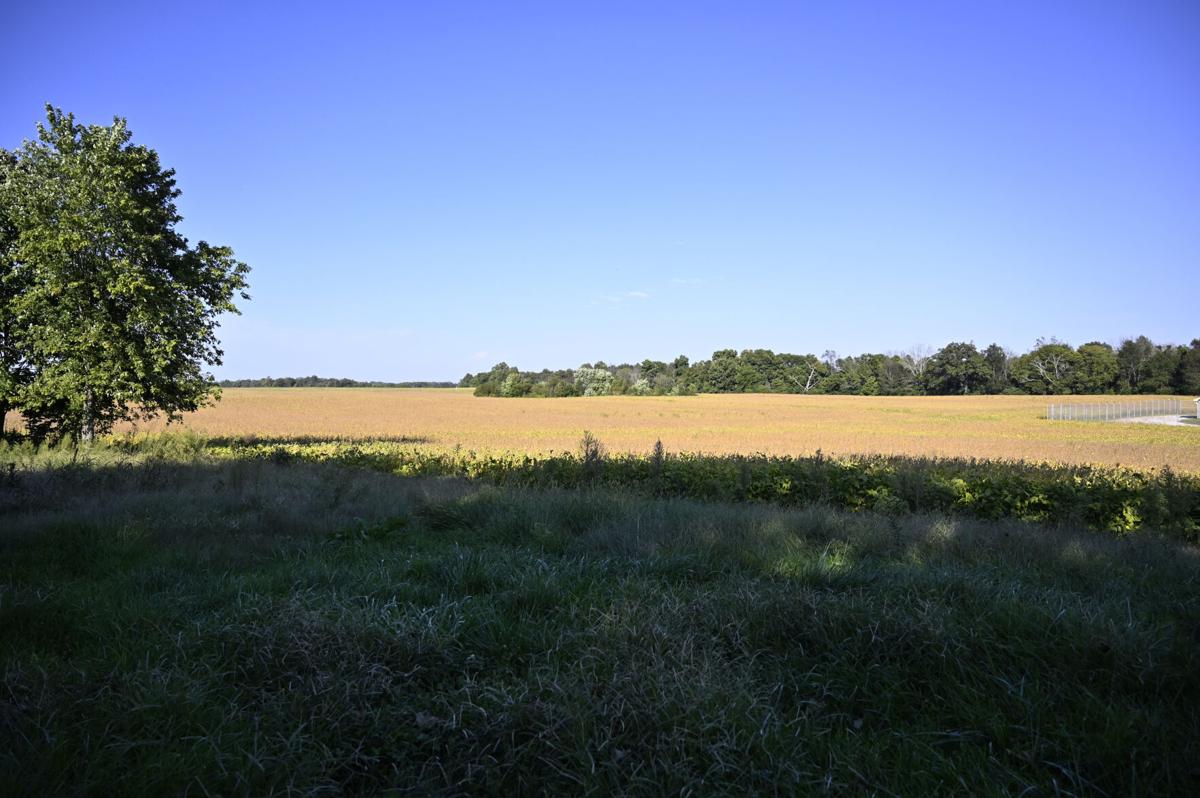 A sign welcomes visitors to the tiny town of Glendale, Ky., the site of a joint venture with Ford Motor Company and SK Innovation to create the $5.8 billion BlueOvalSK Battery Park in Glendale, Ky., Monday, Sept. 27, 2021. The dedicated battery manufacturing complex will be creating 5000 jobs, and is intended to supply Ford's North American assembly plants with locally assembled batteries. (AP Photo/Timothy D. Easley)

A truck drives down a rural road near a water tower marking the location of the Memphis Regional Megasite on Sept. 24, 2021, in Stanton, Tenn. Ford Motor Co. and SK Innovation of South Korea plan to build three new electric-vehicle battery factories and an auto assembly plant by 2025 in Tennessee and Kentucky. The industrial site in Stanton will be the location for a factory to produce electric F-Series pickups and a battery factory. (AP Photo/Mark Humphrey)

GLENDALE, Ky. — Ford and a partner company say they plan to build three major electric-vehicle battery factories and an auto assembly plant by 2025 — a dramatic investment in the future of EV technology that will create an estimated 10,800 jobs and shift the automaker's future manufacturing footprint toward the South.

The factories, to be built on sites in Kentucky and Tennessee, will make batteries for the next generation of Ford and Lincoln electric vehicles that will be produced in North America. Combined, they mark the single largest manufacturing investment the 118-year-old company has ever made and are among the largest factory outlays in the world.

Notably, the new factories will provide a vast new supply of jobs that will likely pay solid wages. Most of the new jobs will be full time, with a relatively small percentage having temporary status to fill in for vacations and absent workers.

Together with its battery partner, SK Innovation of South Korea, Ford says it will spend $5.6 billion in rural Stanton, Tennessee, where it will build a factory to produce electric F-Series pickups. A joint venture called BlueOvalSK will construct a battery factory on the same site near Memphis, plus twin battery plants in Glendale, Kentucky, near Louisville. Ford estimated the Kentucky investment at $5.8 billion and that the company's share of the total would be $7 billion.

With the new spending, Ford is making a significant bet on a future that envisions most drivers eventually making the shift to battery power from internal combustion engines, which have powered vehicles in the United States for more than a century. Should that transition run into disruptions or delays, the gamble could hit the company's bottom line. Ford predicts 40% to 50% of its U.S. sales will be electric by 2030. For now, only about 1% of vehicles on America's roads are powered by electricity.

In an interview Monday, CEO Jim Farley said it would be up to the workers at the new plants to decide whether to be represented by the United Auto Workers union. That question could set up an epic battle with union leaders, who want employees of the future to join the union and earn top UAW production wages of around $32 per hour. It represents a high-stakes test for the UAW, which will need jobs for thousands of members who will lose work in the transition away engines and transmissions for petroleum-powered vehicles.

Farley said it’s too early to talk about pay or unionization at the new factories. He stressed that Ford will maintain a geographic manufacturing balance when the company’s investments in Ohio and Michigan are included. Ford and General Motors have UAW-represented plants in Kentucky and Tennessee, states where it is common for political leaders to actively campaign against unionization.

“We love our UAW partners,” Farley said. “They’ve been incredible on this journey of electrification so far. But it’s up to the employees to decide.”

Just four months ago, Ford said it would build two new battery plants in North America. But Farley said demand for the electric Mustang Mach E SUV and over 150,000 orders for the F-150 electric pickup convinced the company to increase battery output.

Farley said Ford intends to lead the world in electric vehicles, a title now held by upstart Tesla Inc., which is adding jobs at a third factory now under construction near Austin, Texas.

Ford picked the Kentucky and Tennessee sites in part because of lower electricity costs, Farley said, as well being less exposed to flooding and hurricanes than other states. Battery factories use five times the electricity of a typical assembly plant to make cells and assemble them into packs, so energy costs were a big factor, Farley said.

The company also needed huge tracts of land for the plants that weren’t available in other states, Farley said.

Both Southern states also have skilled labor forces and are willing to train workers for the new jobs, he said.

“These jobs are very different than the jobs we’ve had in the past,” Farley said. “We want to work with states who are really excited about doing that training and giving you access to that low energy cost.”

The Tennessee Valley Authority, which serves the Memphis-area site, sells industrial electricity at a price that’s lower than 93% of competitors nationwide, said CEO Jeff Lyash. Rates have stayed flat for the past decade and are planned to stay flat for the next 10 years, he said.

Shares of Ford Motor Co., which is based in Dearborn, Michigan, rose more than 4% in extended trading after the new factories were announced late Monday.

Reaction from the union was tempered Monday, with officials seemingly optimistic about organizing the factories.

“We look forward to reaching out and helping develop this new workforce to build these world-class vehicles and battery components,” union President Ray Curry said in a statement.

“It’s imperative that the UAW organize these if they’re going to have a stake in the electrification of this industry,” she said.

Union representation of the plants could become a contentious issue in the next round of national contract talks with the union in two years.

When General Motors first announced joint venture battery factories over the past few years, its executives said workers would decide on unionization. UAW officials howled in protest. In May, GM said it would support union organizing at the plants.

The Kentucky site is only about 50 miles (80 kilometers) south of Louisville, where Ford has plants that make SUVs and trucks now powered by internal combustion engines. Ford wouldn’t comment on whether those plants eventually would make electric vehicles, but Dziczek said converting at least one would make sense. One plant makes the Ford Escape small SUV, in the most popular segment of the U.S market, she said.

Kentucky Gov. Andy Beshear said in an interview that Ford’s 5,000 jobs at the Glendale battery plants is the largest single employment announcement in state history. And he said it will also bring jobs with suppliers that make components for the plants. Earlier this month state legislators approved $410 million worth of economic development incentives.

Beshear said Ford would get a loan of up to $250 million to draw on through construction. It’s forgivable if the company hits completion milestones. The package also includes the cost of the Glendale land, plus up to $36 million in training incentives, he said.

Ford will formally announce the plants with ceremonies on Tuesday at both sites. In Glendale’s one-block downtown on Monday evening, there were no signs of pending dramatic changes in the economy from the new jobs. All was quiet in the town where the primary businesses are antique shops and corn and soybean fields that stretch in all directions.

The Tennessee assembly plant is to be built on a site about 50 miles (80 kilometers) east of Memphis that’s almost six square miles (15.5 square kilometers). Combined, the assembly plant, to be run by Ford, and the battery factory, would employ about 5,800 workers.

State officials have been trying to develop the site for years without success. Gov. Bill Lee said Tennessee offered Ford $500 million in incentives to win a contest with 15 other states. Lee said he is confident legislators will approve the spending.