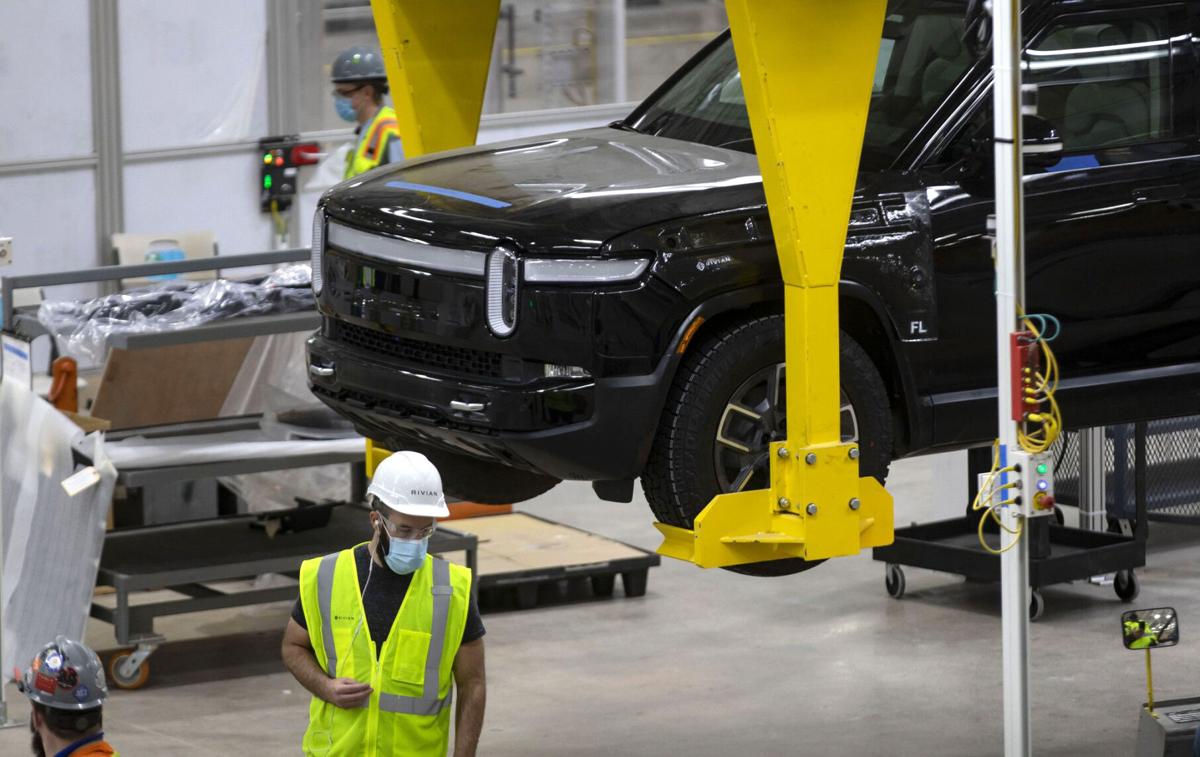 Vehicles are assembled and tested April 14, 2021, at the Rivian plant in Normal, Ill. Rivian pushed its production launch back to September, in part because of the semiconductor chip shortage roiling the auto industry. (Brian Cassella/Chicago Tribune/TNS) 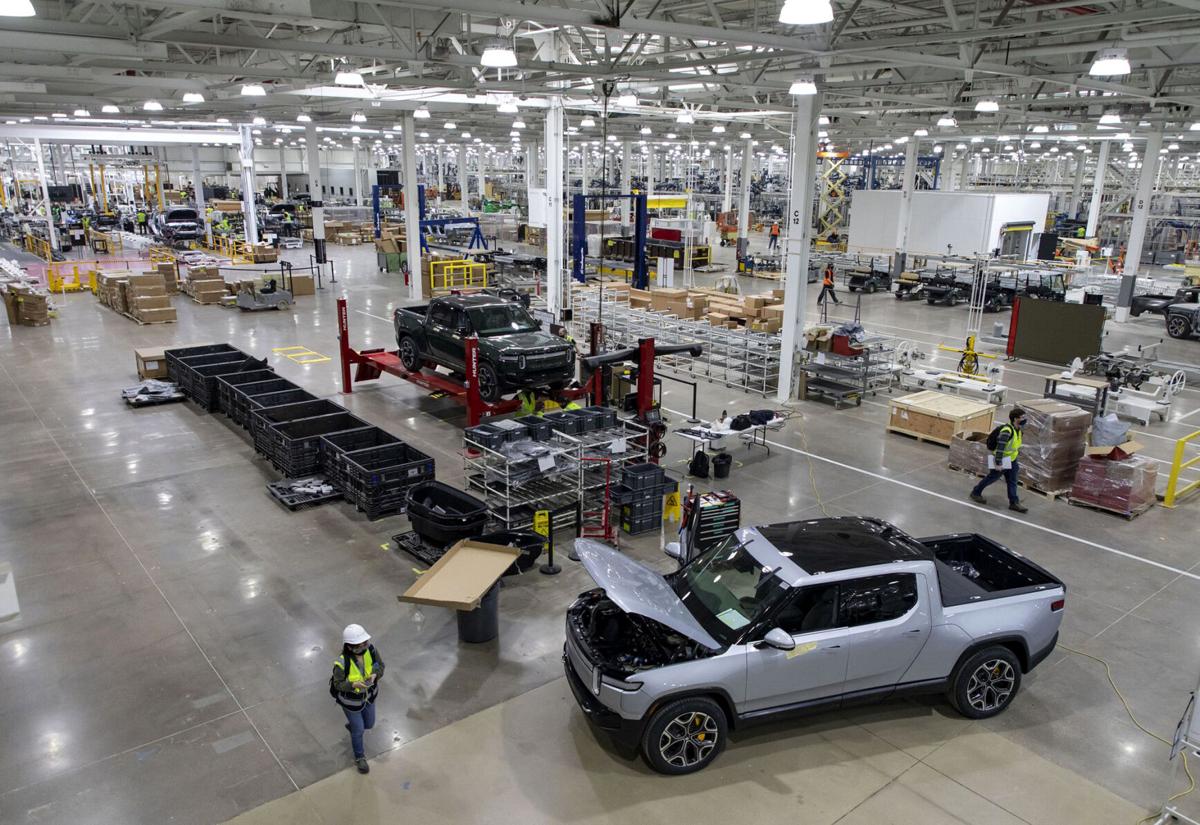 RT1 trucks are assembled and tested on April 14, 2021, before the new Rivian plant fully opens in Normal, Illinois. Rivian is preparing to manufacture electric truck and SUV models in the former Mitsubishi facility. (Brian Cassella/Chicago Tribune/TNS)

Vehicles are assembled and tested April 14, 2021, at the Rivian plant in Normal, Ill. Rivian pushed its production launch back to September, in part because of the semiconductor chip shortage roiling the auto industry. (Brian Cassella/Chicago Tribune/TNS)

RT1 trucks are assembled and tested on April 14, 2021, before the new Rivian plant fully opens in Normal, Illinois. Rivian is preparing to manufacture electric truck and SUV models in the former Mitsubishi facility. (Brian Cassella/Chicago Tribune/TNS)

Startup EV truck manufacturer Rivian has pushed its production launch back to September, in part because of the semiconductor chip shortage roiling the auto industry.

Already behind its original schedule, Rivian’s first production vehicle — a $75,000 launch version of its R1T electric pickup truck — was supposed to roll off the line this month from the automaker’s factory in downstate Normal.

Rivian’s founder and CEO, RJ Scaringe, broke the news to preorder customers in an email sent from the Normal plant Friday.

“The cascading impacts of the pandemic have had a compounding effect greater than anyone anticipated,” Scaringe said. “Everything from facility construction, to equipment installation, to vehicle component supply (especially semiconductors) has been impacted by the pandemic.”

Founded in 2009, Rivian is building an electric truck and SUV, which will arrive later this fall, as well as custom EV delivery vans for Amazon, an investor in the company.

Rivian, which is now based in Irvine, California, has about 2,000 employees working at its sole production facility, a converted Mitsubishi plant in Normal, a rural college town about 130 miles south of Chicago. It has 7,000 employees overall and a roster of major investors that valued the startup at $28 billion at the start of the year.

The company began taking preorders in November of special launch editions of its R1T truck and R1S SUV, with plans to begin delivery in June. The inaugural models have 300-plus miles of range, go from zero to 60 mph in 3 seconds and start at $75,000 for the truck and $77,500 for the SUV, offset by a $7,500 federal tax credit for electric vehicles.

Rivian is not disclosing the number of customers who have preordered the truck and SUV models, but Scaringe offered a lengthy explanation —and apology — for the production delays in his email Friday.

“We have now built hundreds of vehicles as part of our validation process, with many of those spotted out in the wild covered in unique vinyl wraps,” Scaringe said. “I have been asked why we aren’t delivering those vehicles or why we continue to test rather than deliver. We believe it is critical to both our long-term success and your ultimate satisfaction that the quality and robustness of our launch products truly sets the tone for what to expect from us as a brand.”

Rivian was a no-show at the just-completed special summer edition of the Chicago Auto Show, as it focuses on the delayed September launch. But attendees got the first look at a rival and more affordable offering, the Ford F-150 Lightning, an electrified version of the popular truck due in dealerships by the middle of next year.

Illinois had 27,506 registered electric vehicles in the state as of the end of June, or 0.26% of the state’s 10.3 million registered vehicles, according to Dave Druker, a spokesman for the Secretary of State’s office. Gov. J.B. Pritzker has set a goal of putting 1 million electric vehicles on Illinois roads by 2030.

Rivian isn’t the only automaker to blame production delays on the global semiconductor shortage.

A dearth of the tiny chips, which control everything from cruise control to infotainment systems, has hobbled production across the auto industry this year. Several Chicago-area auto plants remain closed because of the ongoing shortage, and new car inventory on dealer lots is in short supply.

Ford’s Chicago Assembly Plant, which makes the Ford Explorer, Lincoln Aviator and Police Interceptor SUVs, was been closed for much of the spring, idling about 5,200 employees working three shifts. It reopened in June, but shut down again this month, with plans to resume two shifts beginning Aug. 2, Ford spokeswoman Kelli Felker said.

The Belvidere Assembly Plant near Rockford, which makes the Jeep Cherokee SUV, has been mostly closed since March because of the chip shortage. The plant, which had about 3,600 employees working two shifts, is planning to eliminate one shift — and 1,641 jobs — when it resumes production July 26, Stellantis spokeswoman Jodi Tinson said.

Automakers and industry analysts expect the chip shortage to ease and production to resume full throttle during the second half of the year.