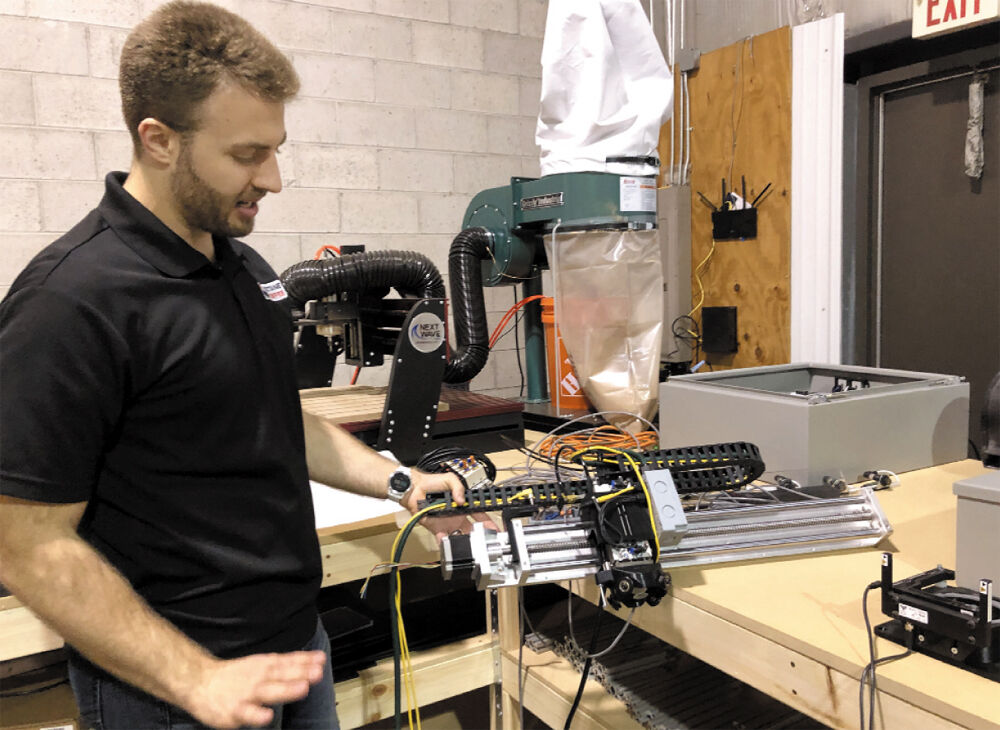 Octane Coffee founder Adrian Deasy explains how the lid-placing mechanism inside the company’s first fully automated coffee drive-thru operation will work. The company made more than nine attempts to find an approach that worked for getting a machine to correctly and efficiently put a lid on a cup, Deasy said. 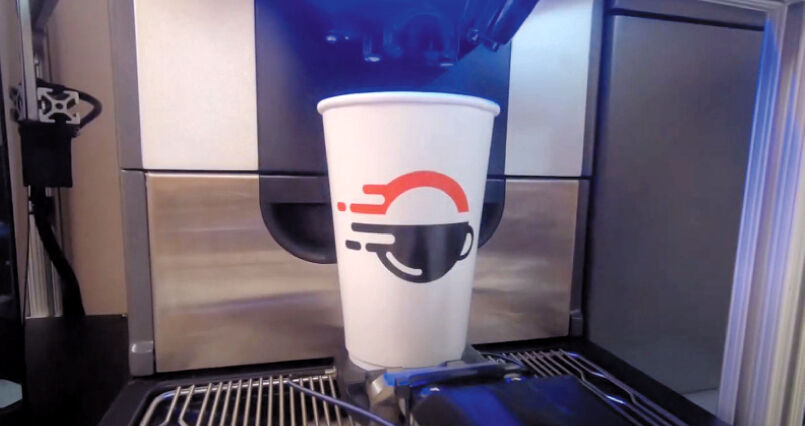 A still from an Octane Coffee demonstration video shows a robotic arm gripping a cup of coffee and holding underneath a high-tech coffee maker designed to make drinks to order. Octane Coffee is slated to open its first fully automated coffee drive-thru in the parking lot of Point Burger Bar, W229-N1400 Westwood Drive sometime in August or September.

Octane Coffee founder Adrian Deasy explains how the lid-placing mechanism inside the company’s first fully automated coffee drive-thru operation will work. The company made more than nine attempts to find an approach that worked for getting a machine to correctly and efficiently put a lid on a cup, Deasy said.

A still from an Octane Coffee demonstration video shows a robotic arm gripping a cup of coffee and holding underneath a high-tech coffee maker designed to make drinks to order. Octane Coffee is slated to open its first fully automated coffee drive-thru in the parking lot of Point Burger Bar, W229-N1400 Westwood Drive sometime in August or September.

CITY OF PEWAUKEE — When Adrian Deasy first started thinking about launching a fully-automated drive-thru coffee business, the thing he wanted most to give customers was more time — that and a great cup of coffee.

Three years and dozens of investors later, the 31-year-old entrepreneur is on the cusp of launching the first location of Octane Coffee in the parking lot of Point Burger Bar, W229-N1400 Westwood Drive. The business is slated to open in August or September.

Deasy and his partner Burt Peterson have been spending their days in a 2,000-square-foot garage and office space off Sunset Drive — the company’s current headquarters — retooling and testing the equipment that will eventually fill the artfully designed 8-by-20-feet shipping container that will be Octane Coffee’s first corporate store.

A mechanical engineer with a degree from the University of Wisconsin-Madison, Deasy worked as a manufacturing engineer at places like Harley-Davidson and Ace Precision in Oconomowoc, before launching his own consulting business in 2016.

It was just a couple years later that he landed on the idea of creating a fully automated drive-thru coffee spot.

Seeing how popular typical fast-food coffee establishments were in the Midwest, Deasy started thinking that a fully automated system where the customer’s coffee is always hot, and ready to be picked up within 30 seconds or less, could be enormously popular.

Drive-thru-only coffee shops staffed by people are extremely popular on the West Coast and expected to become popular here as well, Deasy noted. But instead of jumping into that business, Deasy and his investors thought automating the system could make a good service even better.

“The drive-thru experience at a Starbucks can suck. Sometimes it’s awesome: Sometimes you are the first person in line, but even then, it’s still a three-to-four-minute wait. If you are 8 to 12 cars out, it’s a 20-minute wait sometimes. You could be late for work, late for a meeting, or your kids could be screaming in the car,” Deasy said. “Coffee is a very ‘I need it, and I need it now’ kind of thing. Yes, the automation is cool, but our guiding ethos is ‘we sell time with a great cup of coffee.’”

To make his vision a reality, Deasy got Swedish coffee machine maker Egro, whose machines can be found in hundreds of coffee shops on the West Coast, to allow them access to the programming guts of their machines.

The machines are fully automated out of the box, but typically they require someone to press a button. By allowing Octane to hook their computers up to the machines, the company is able to send complex instructions for making a cup of coffee exactly to order.

Is your favorite drink a medium-hot, dry cappuccino with a shot of hazelnut syrup and skim milk? Octane can set the machine to make that exact cup of coffee.

“We now can basically play the piano with every single drink,” Deasy said.

Once the coffee is done, a robotic arm will grab the finished drink, put a lid on it, and place it in a queue for pickup.

The computers will receive the recipes from the orders customers send them via the Octane app.

Customers will then drive up to the coffee shop and pick up their coffee from their very own cubbyhole.

“We had to sit and really rethink the drive-thru experience. There is a high row and low row depending on what you drive, a sedan, an SUV or a truck,” Deasy said. “We are juggling everything (in the cloud) to release your coffee about a minute or two before you get there. Once you arrive on site, we shift to Bluetooth beacons on your cellphone that try to determine where you are in line.”

In addition to espresso drinks, there will also be machines making your typical roast coffees.

The company will be using Stone Creek coffee for its hot coffees. They only thing it won’t be able to serve is iced coffee drinks, but there will be a vending machine inside that can serve bottled drinks, like cold brews and juices, that customers can pick up along with the hot coffee drinks.

While Deasy and Peterson work to outfit the shipping container with the complex systems that will make it the first Octane Coffee location, they’ll have the support of a host of investors.

Among the company’s current investors are Lancaster Investments in Madison, Tundra Angels in Green Bay, local angel investors Dan Voell and Chuck Kubiak, and Stone Creek Coffee Co-owner Eric Resch, who also sits on the start-up’s board of directors. The company also used a WeFunder Campaign to raise $75,000 from friends, family, and fans of the company, and has benefited from start-up accelerators and competitions like gBeta Milwaukee and Project Pitch it. Deasy put up about $50,000 of his own money as well.

While the company is still in its infancy, Deasy said the hope is to eventually open around four corporate locations in the Milwaukee and/or Chicagoland areas, before branching out into franchises.

Asked what drink he’ll order when the first location opens to the public, Deasy said: “I’m kind of simple. I like a vanilla latte.”

CITY OF PEWAUKEE — City officials have officially granted start-up Octane Coffee the conditional use permit it will need to open a standalone, automated drive-thru coffee shop in the parking lot at W229N1400 Westwood Drive, where Veloce Indoor Speedway and Point Burger Bar are located.

CITY OF PEWAUKEE - The Plan Commission is slated to continue its review of start-up Octane Coffee’s application to open a standalone, automated drive-thru coffee shop.

Coffee made by robots?

CITY OF PEWAUKEE — Busy Waukesha-area coffee lovers could soon have a new place to grab a cup of joe — one made by robots.