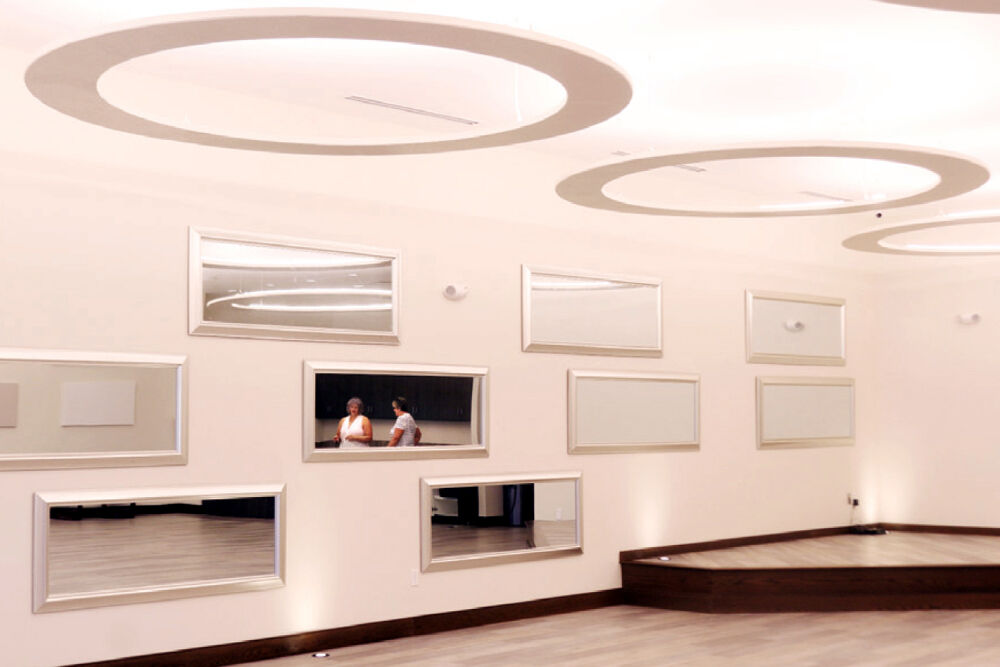 Reflected in one of the mirrors, Dawn Koch of West Bend, left, and Terri Johnson of Hartford work on checking the sound for a jazzercise class at Healing Elements Day Spa in West Bend. 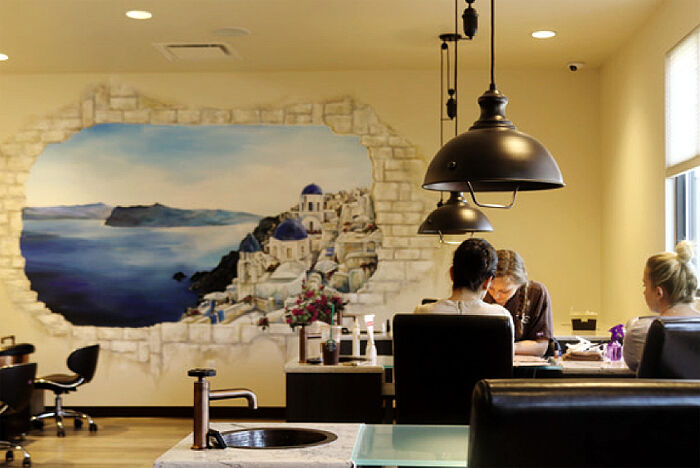 Manicurist Eliza Winkler of West Bend works on the nails of Lindsay Fellers of Jackson, left, and Jessica Esteves of Grafton with a mural of Greece behind them at Healing Elements Day Spa in West Bend.

Reflected in one of the mirrors, Dawn Koch of West Bend, left, and Terri Johnson of Hartford work on checking the sound for a jazzercise class at Healing Elements Day Spa in West Bend.

Manicurist Eliza Winkler of West Bend works on the nails of Lindsay Fellers of Jackson, left, and Jessica Esteves of Grafton with a mural of Greece behind them at Healing Elements Day Spa in West Bend.

WEST BEND — Healing Elements Day Spa, a local West Bend business, is being recognized in a SCORE project about Wisconsin businesses who partnered with the Wisconsin Small Business Administration to weather the COVID19 pandemic last year.

Nicolette Kearns, owner of Healing Elements, recently did an interview for a SCORE video highlighting small businesses in Wisconsin that survived the challenges of shutdowns and regulations caused in 2020 by the pandemic. SCORE is a nonprofit partner of the Small Business Administration, which offers mentoring and workshops to small businesses.

Kearns said the interview focused on local businesses, the challenges she faced during pandemic shutdowns and SBA programs that helped her overcome those conditions.

“We were closed for about eight weeks,” she said.

Kearns said that when she contacted Commerce State Bank for the loan to build her current facility a few years ago, the representatives she worked with at Commerce told her about SBA loans. The loan she took out was half through Commerce, and half through the SBA.

Last year, she contacted the bank during the shutdowns, when she had no income from Healing Elements to help make payments, and discovered the SBA loan offered assistance.

“The SBA actually took away our payments for six months, so we only had to pay the Commerce State Bank half of the loan. That was a huge relief, being closed for eight weeks with a new building,” Kearns said.

After the first six months, the SBA extended the benefit for another six months due to economic conditions continuing to be depressed from the pandemic. Kearns says the information shared with her by the SBA indicated those 12 months of payments were forgiven, so they will come off the loan without needing to be paid later, but she is still gathering information.

She said she hadn’t known anything about the loan program before Commerce set her up with it, or the benefits available through it.

“Not being aware of something so beneficial ... It really saved us,” Kearns said.

Having to pay only half the normal loan amount, the business was able to make its payments in spite of the lost months, and last until Healing Elements reopened last summer. Kearns said that since then, the business has gradually gotten back on its feet with the financial relief offered by the SBA loan and other programs.

She noted that last summer remained slow even after reopening, as COVID19 conditions and distancing made people hesitant to receive spa treatments that involve being in contact with spa personnel, but business began to pick up over the winter and into this year.

“We feel like we’re back where we were, before the pandemic. We have waiting lists for most services most days,” Kearns said.

The video Kearns was interviewed for will be premiered next week at a reception for Healing Elements and other featured businesses. It will be hosted at Commerce State Bank at 5 p.m. Wednesday.

SCORE joined with other SBA Resource Partners statewide, including the Wisconsin Small Business Development Center, the Wisconsin Women’s Business Initiative Corporation, Western Dairyland Economic Opportunity Council and Wisconsin Business Development, Inc., in selecting six small businesses across the state that used the financial resources and technical assistance of the SBA during the ongoing crisis, according to a press release from SCORE.