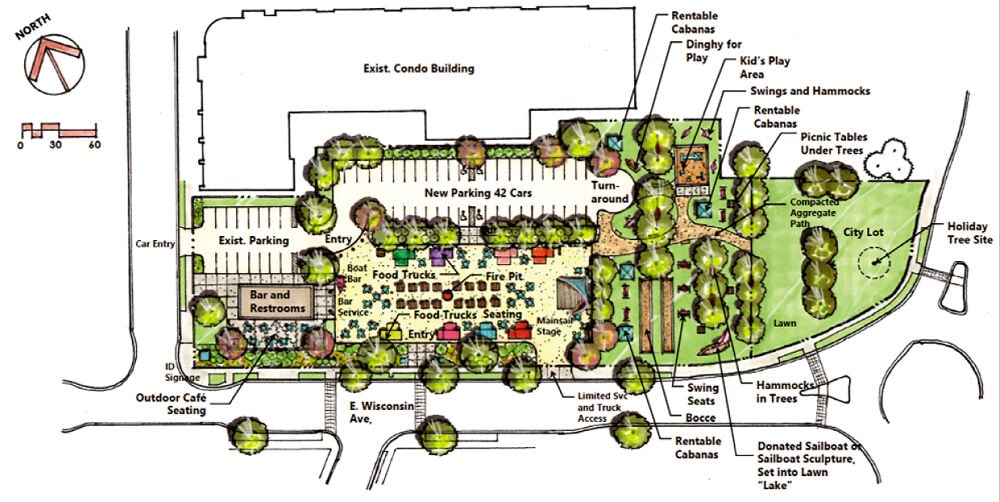 The area on Wisconsin Avenue where the food truck court will be if the city approves it.

The area on Wisconsin Avenue where the food truck court will be if the city approves it.

OCONOMOWOC — There could be more food trucks in Oconomowoc as soon as next summer as Mike and Ken Herro are preparing to propose a food truck court called The Mainsail for their property from 202 - 310 E. Wisconsin Avenue in downtown Oconomowoc.

The parcel, about 1.67 acres in size, would feature eight food trucks, a bar, and public restrooms along with a recreational area for kids.

Currently, there are two food trucks parked in the parking lot of the former Oconomowoc Enterprise building and a car detailing business on the land.

Ken Herro said with popularity in food trucks rising, cities big and small are buying into the idea of having places for food trucks to congregate.

“We’ve experienced them around the country for several years now. We want to bring more synergy to the downtown,” Ken Herro said.

Prior to the city passing a revised food truck ordinance this past spring, there used to be a third food truck at the location — Niko’s Gyros — and interest in the spot has been heavy, Mike Herro said.

“We’ve had a lot of requests from other food trucks to come,” Mike Herro said. “ ... We knew all along this could have been an option a while ago.”

Mike Herro said Ken has traveled around the country and his experiences were that the food truck courts don’t compete with the downtowns, but rather bring more energy to the area.

“The city, since 2008, has tried to bring more energy downtown,” Mike Herro said. “We think that this will benefit everybody down here. It gives people another option of different styles of food.

“It’s going to be a good thing for downtown Oconomowoc.”

Mike Herro said there is not a plan to put a cover over the seating area nor have heated seating for the winter season. He also said he and Ken would have to talk to the food truck operators about what they envision for the winter months.

The current layout for the plan uses the existing parking in between Fowler Lake Village and the auto detailing business as the entrance to the rear parking area where there will be 42 additional spots on site.

Mike Herro said the court will be themed after boats as well as inland yachting.

Ken Herro said the project “will be beneficial for everybody up and down Wisconsin Avenue and Main Street.”

Both Ken and Mike Herro will meet with the city staff this week to get the staff’s opinion on the project thus far. Once that meeting is complete, they will have to go through various city committees before ultimately going before the Common Council to receive a vote.

Mike Herro said should everything goes as planned, the existing buildings on the site will come down in the fall with construction beginning in spring or summer 2022.