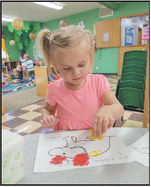 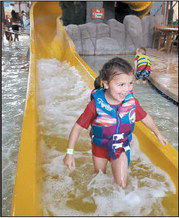 OCONOMOWOC — As businesses begin to tentatively ask staff to return to work during the pandemic, one potential hurdle is on many families’ minds: child care.

Securing a spot at a quality child care facility was a costly and competitive process for many families even before COVID-19, and it could be more difficult on both fronts going forward.

“The impacts of these closures could be significant for families, providers, and employers,” the Policy Forum report reads. “As more businesses reopen and greater numbers of employees return to onsite work, the availability of child care becomes even more important to a functioning economy.”

Providers who closed down temporarily or are dealing with fewer children on an ongoing basis are still working with expenses such as rent, cleaning and personal protective equipment.

In Oconomowoc, Little Dumplings Early Learning Center Director Wendy Haerterick said that while the facility never closed down, licensing officials told them they had to go from 200 average children per day down to 50. That led to fewer dollars coming in through tuition. “It did cause a little financial disruption,” she said.

Wisconsin Policy Forum researcher Betsy Mueller said increased cost and increased competition are both possible from the disruption spurred by the pandemic. “I think something else to keep an eye on (is) if child care is not available and families would normally have depended on their child being in school, that could be an increased financial strain on families,” she said, adding that in the case families can’t send both parents back to work, one will have to stay home. “A lot of times, that’s going to be mothers.”

In a survey of Wisconsin child care providers published by the National Association for the Education of Young Children in March, 38% of respondents said they didn’t know how long they would be able to survive a closure without financial assistance. In more extreme cases, 20% said they could not survive two weeks and 10% said they could not survive any closure without support. Forty-six percent of providers also said they had lost income because of families’ inability to pay.

Wisconsin is receiving $51.6 million in federal block grant funding from the Coronavirus Aid, Relief, and Economic Security Act aimed at providing support to child care providers and ensuring that adequate child care is available in the state. About 90% of that has already been allocated to providers, though. Waukesha County received $2.86 million, which went to 131 providers.

The circumstances do offer some new opportunities for child care providers. Haerterick said Little Dumplings is likely to continue offering full-day education-focused programming for school-aged children, as some are likely to have ongoing virtual instruction. Staff help children with the Zoom meetings and make sure time is spent on homework. For parents looking to balance their children’s needs for both education and socialization, that could prove an attractive option.

Haerterick said Little Dumplings has also been doing weekly field trips, often renting out entire facilities such as Helium Trampoline & Indoor Adventure Park and Stonefire Pizza, enabling hands-on experience in a safe and controlled environment. Haerterick said parents have been overwhelmingly receptive to the idea and the pandemic’s effects on the economy have made renting out spaces more plausible. “They’re happy for the business too,” she said.

Going forward, Haerterick envisions the changes made at Little Dumplings to stick around for a while. She tells staff “the next 18 months are going to be pretty crucial ... it’s been a ride.”