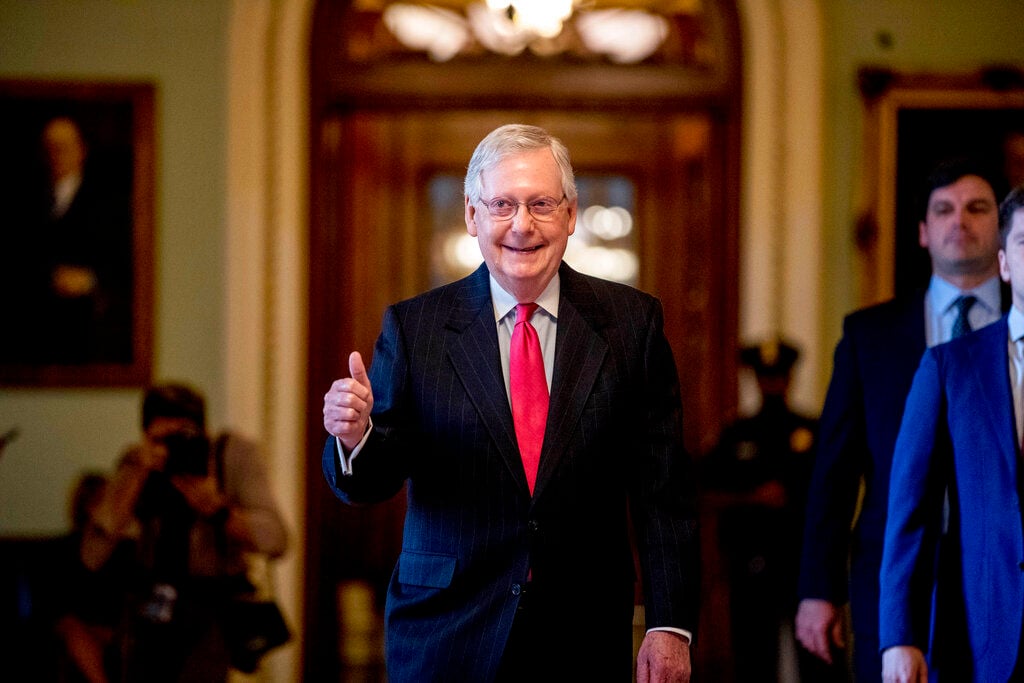 Senate Majority Leader Mitch McConnell of Ky. gives a thumbs up as he leaves the Senate chamber on Capitol Hill in Washington, Wednesday, March 25, 2020, where a deal has been reached on a coronavirus bill. The 2 trillion dollar stimulus bill is expected to be voted on in the Senate Wednesday. (AP Photo/Andrew Harnik) 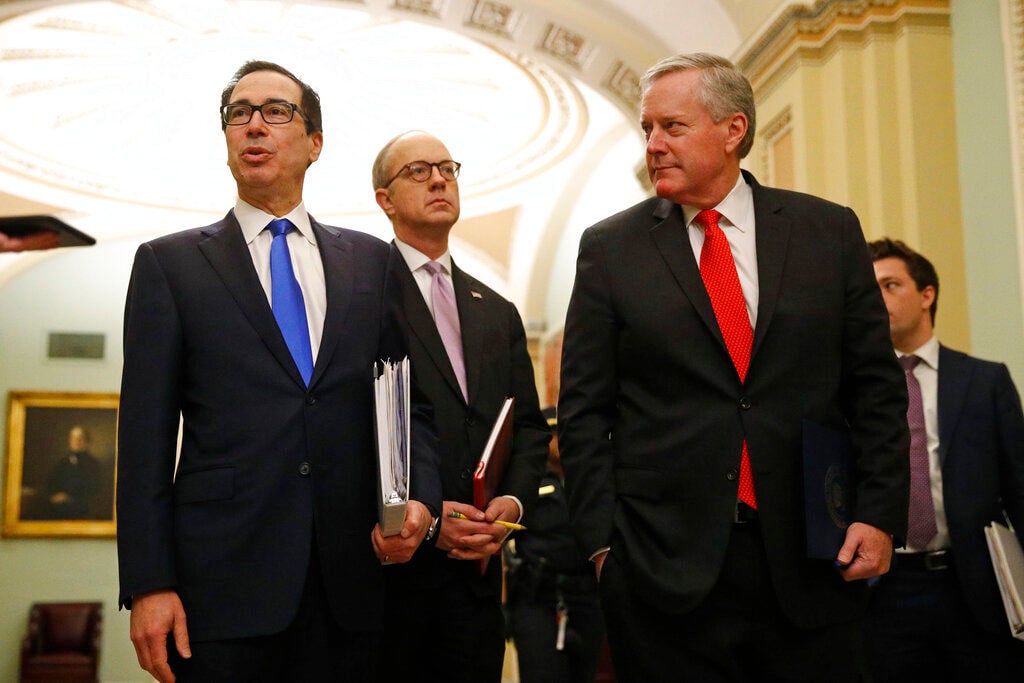 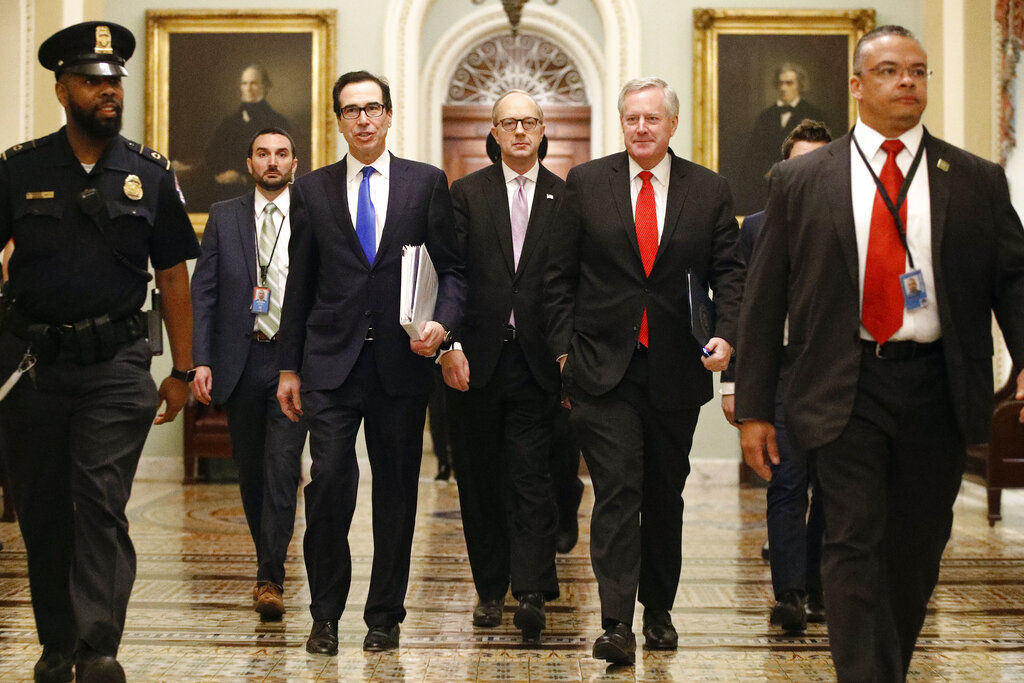 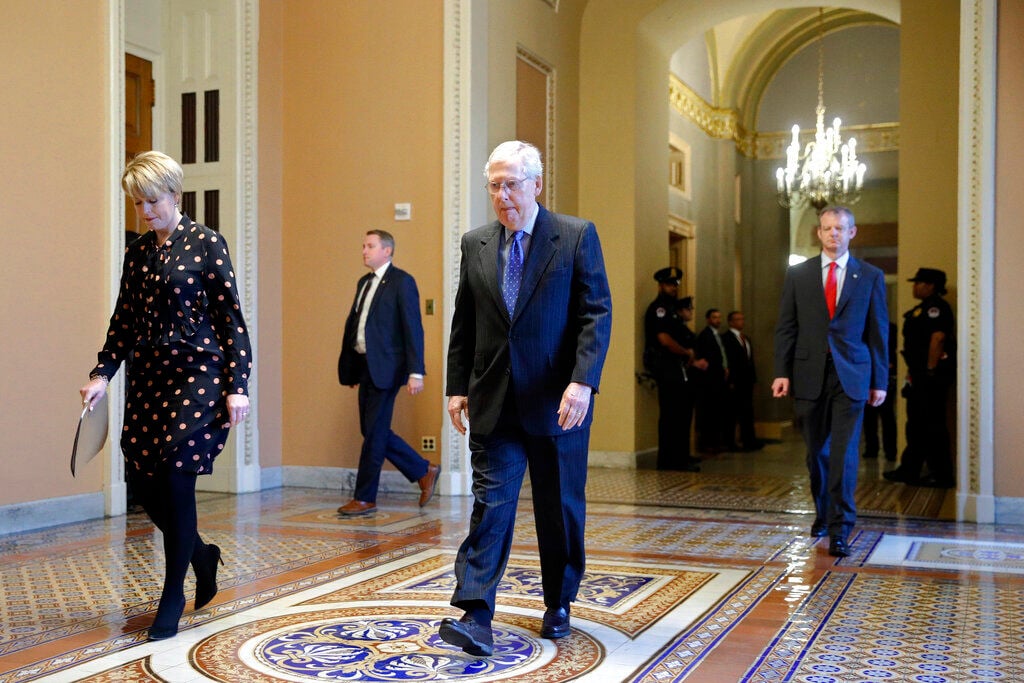 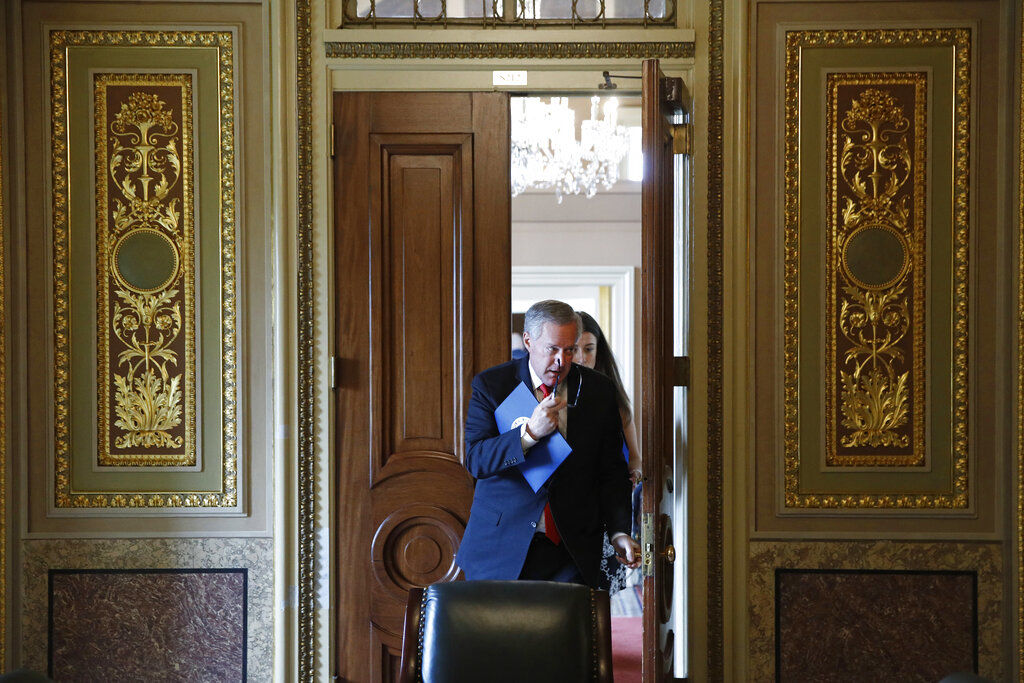 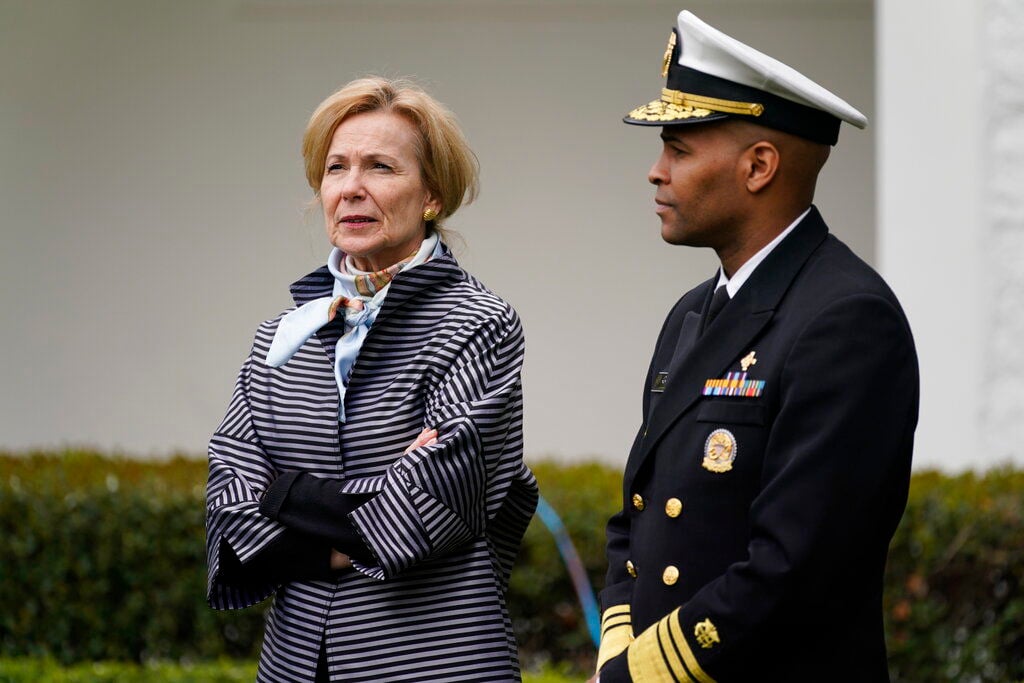 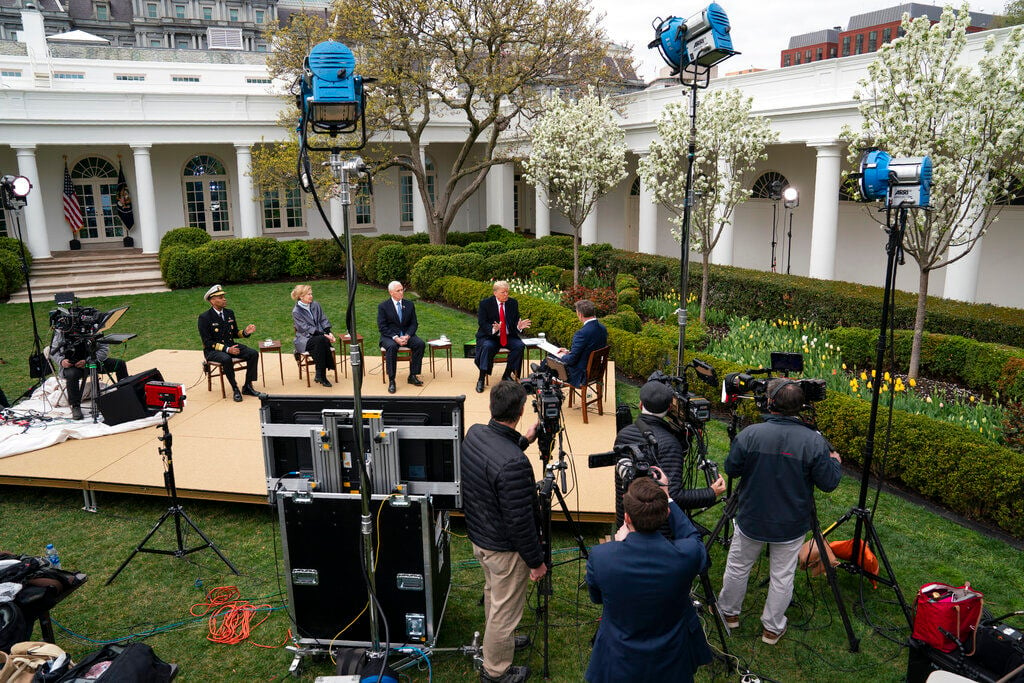 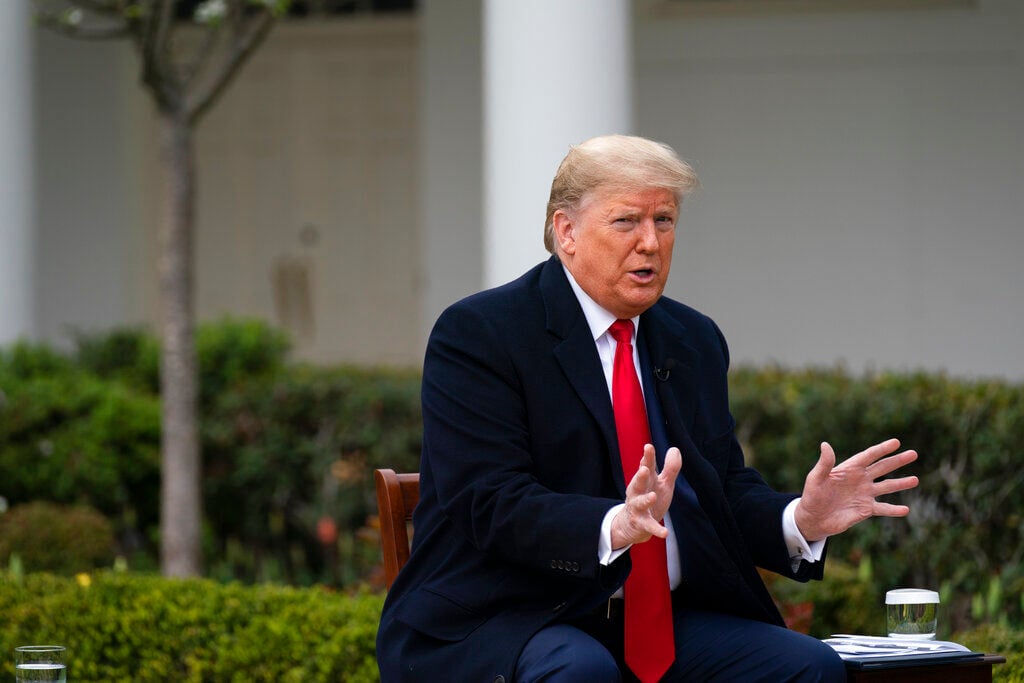 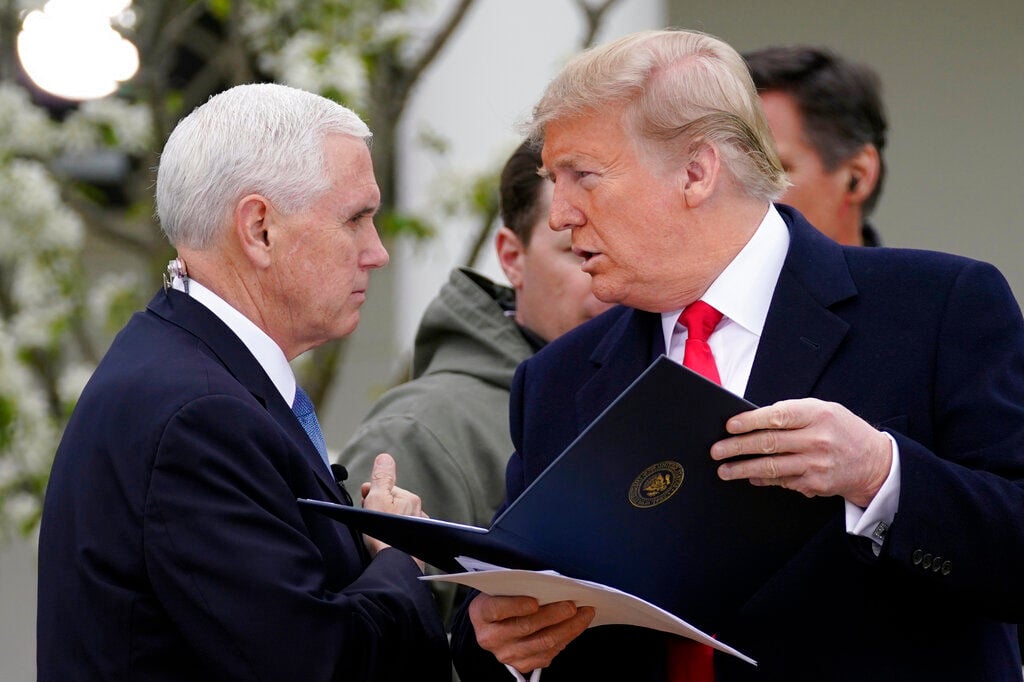 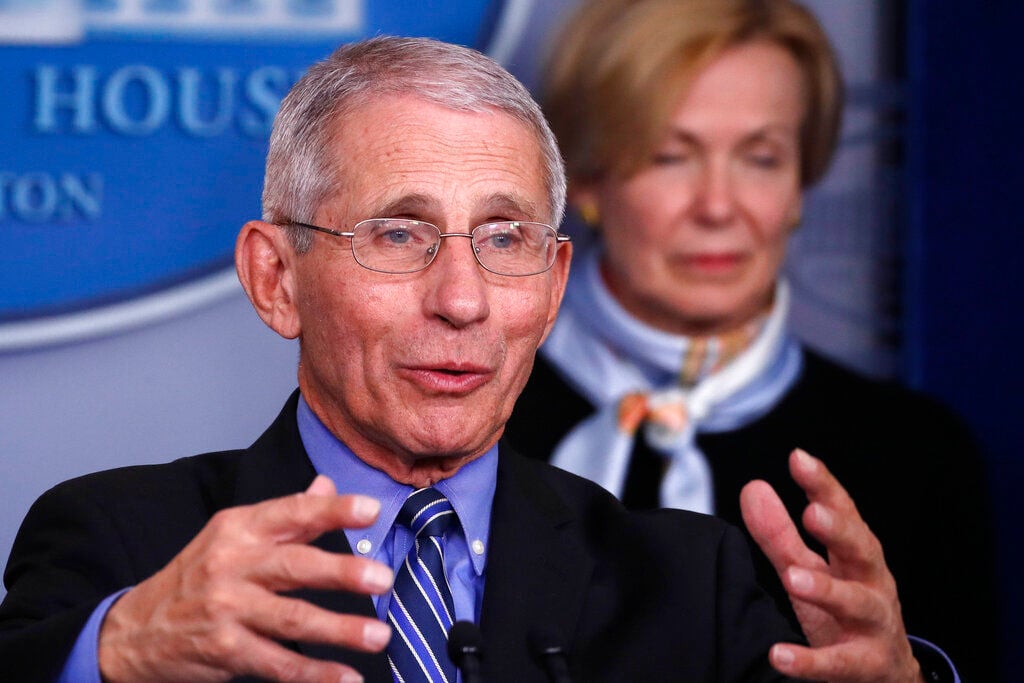 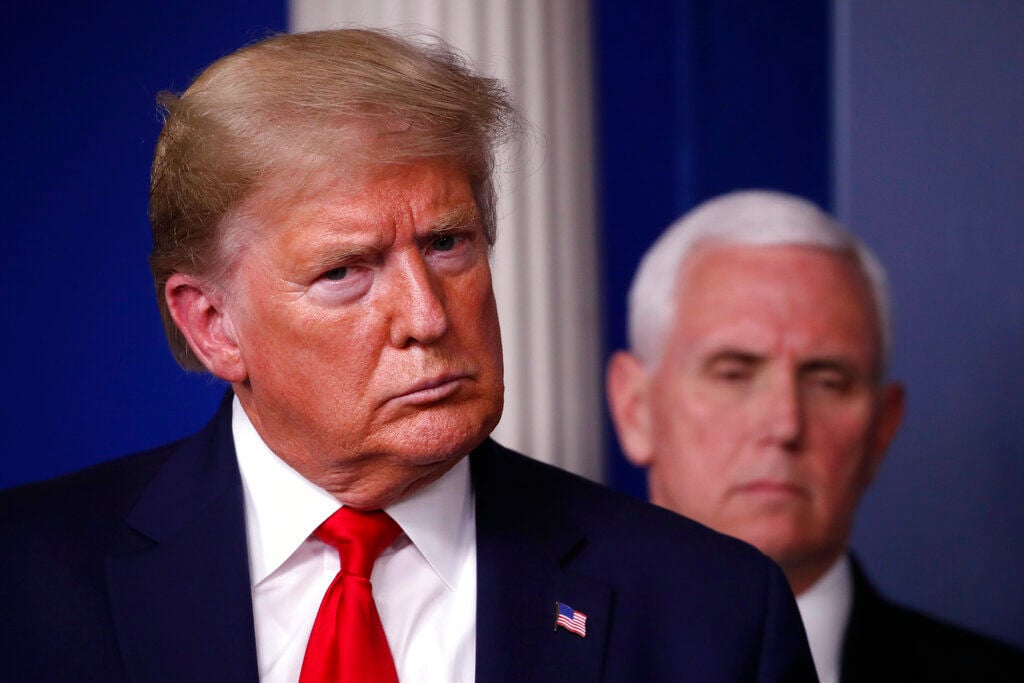 Senate Majority Leader Mitch McConnell of Ky. gives a thumbs up as he leaves the Senate chamber on Capitol Hill in Washington, Wednesday, March 25, 2020, where a deal has been reached on a coronavirus bill. The 2 trillion dollar stimulus bill is expected to be voted on in the Senate Wednesday. (AP Photo/Andrew Harnik)

WASHINGTON — The White House and Senate leaders announced agreement Wednesday on an unparalleled, $2 trillion emergency bill to rush aid to businesses, workers and a health care system slammed by the coronavirus pandemic.

It's the largest economic rescue bill in history. The package is intended as a weeks-long or months-long patch for an economy spiraling into recession or worse and a nation facing a grim toll from an infection that's killed nearly 20,000 people worldwide.

Underscoring the effort's sheer magnitude, the bill finances a response with a price tag that's half the size of the entire $4 trillion annual federal budget.

"A fight has arrived on our shores," said Senate Majority Leader Mitch McConnell. "We did not seek it, we did not want it, but now we're going to win it."

They said passage of the legislation was expected in the Republican-led Senate by the end of the day.

That would leave final congressional approval up to the Democratic-controlled House. In a written statement, Speaker Nancy Pelosi, D-Calif., said the bipartisan agreement “takes us a long way down the road in meeting the needs of the American people” but she stopped short of fully endorsing it.

“House Democrats will now review the final provisions and legislative text of the agreement to determine a course of action,” she said.

House members are scattered around the country and the timetable for votes in that chamber is unclear.

House Democratic and Republican leaders have hoped to clear the measure for President Donald Trump's signature by a voice vote without having to call lawmakers back to Washington. But that may prove challenging, as the bill is sure to be opposed by some conservatives upset at its cost and scope. Ardent liberals were restless as well.

White House aide Eric Ueland announced the agreement in a Capitol hallway Wednesday, shortly after midnight, capping days of often intense haggling and mounting pressure. The wording of some final pieces of the agreement need to be completed.

The sprawling, 500-page-plus measure is the third coronavirus response bill produced by Congress and by far the largest. It builds on efforts focused on vaccines and emergency response, sick and family medical leave for workers, and food aid.

It would give direct payments to most Americans, expand unemployment benefits and provide a $367 billion program for small businesses to keep making payroll while workers are forced to stay home.

One of the last issues to close concerned $500 billion for guaranteed, subsidized loans to larger industries, including a fight over how generous to be with the airlines. Hospitals would get significant help as well.

McConnell, a key negotiator, said the package will “rush new resources onto the front lines of our nation's health care fight. And it will inject trillions of dollars of cash into the economy as fast as possible to help Americans workers, families, small businesses and industries make it through this disruption and emerge on the other side ready to soar."

Five days of arduous talks produced the bill, creating tensions among Congress' top leaders, who each took care to tend to party politics as they maneuvered and battled over crafting the legislation. But failure was never an option, which permitted both sides to mark big wins.

A huge cash infusion for hospitals expecting a flood of COVID-19 patients grew during the talks at Schumer's insistence. Republicans pressed for tens of billions of dollars for additional relief to be delivered through the Federal Emergency Management Agency, the lead federal disaster agency.

Democrats said the package would help replace the salaries of furloughed workers for four months, rather than the three months first proposed. Furloughed workers would get whatever amount a state usually provides for unemployment, plus a $600 per week add-on, with gig workers like Uber drivers covered for the first time.

Schumer said businesses controlled by members of Congress and top administration officials — including Trump and his immediate family members — would be ineligible for the bill's business assistance.

The New York Democrat immediately sent out a roster of negotiating wins for transit systems, hospital, and cash-hungry state governments that were cemented after Democrats blocked the measure in votes held Sunday and Monday to maneuver for such gains.

Republicans won inclusion of an “employee retention” tax credit that's estimated to provide $50 billion to companies that retain employees on payroll and cover 50% of workers' paychecks. Companies would also be able to defer payment of the 6.2% Social Security payroll tax.

A companion appropriations package ballooned as well, growing from a $46 billion White House proposal to more than $300 billion, which dwarfs earlier disasters — including Hurricane Katrina and Superstorm Sandy combined.

To provide transparency, the package is expected to create a new inspector general and oversight board for the corporate dollars, much as was done during the 2008 bank rescue, officials said.

Europe is enacting its own economic recovery packages, with huge amounts of credit guarantees, government spending and other support.

France, Spain and Italy have launched similar programs. The European Union has suspended limits it imposes on member countries' borrowing and deficits, freeing them to spend more.

Some of Europe's fiscal stimulus kicks in automatically without any new legislation due to social welfare safety nets that are more extensive than in the U.S.

At the White House on Tuesday, even as the public health crisis deepened, President Donald Trump expressed eagerness to nudge many people back to work in the coming weeks and held out a prospect, based more on hope than science, that the country could be returning to normal in less than a month.

Medical professionals say social distancing needs to be stepped up, not relaxed, to slow the spread of infections.

In the United States, more than 55,000 people have been sickened and more than 800 have died.