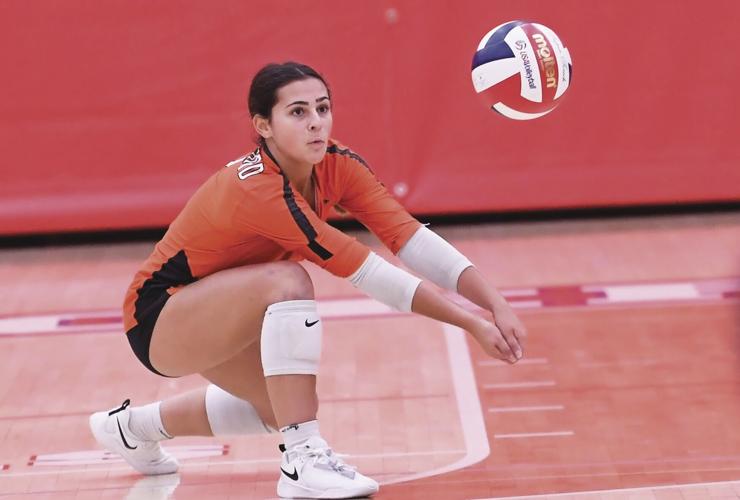 Hartford’s Melina Kurth goes low for a dig during Thursday’s match against Slinger. 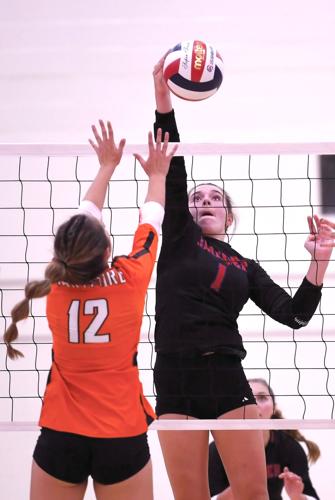 Hartford’s Melina Kurth goes low for a dig during Thursday’s match against Slinger.

SLINGER — A rare thing occurred in Slinger Thursday night and Hartford girls’ volleyball coach Shannon Klink had to think hard of when the last time it happened.

“We’re always talking mindset,” said Klink, “and these rivalries are always the ultimate mindset kind of games. The energy was up all night and for us to take them out at (their) home is really very special, especially winning in four (sets).

“I don’t think that has happened in 10 years with us. It always seems to be five sets in this match.”

Orioles’ senior setter and co-captain Taylor Kutz, who finished with 32 assists in the victory, wouldn’t have it any other way.

“We always love a challenge,” she said. “It was a great game, and we couldn’t have done it without everyone involved.”

Slinger coach Chelsea Vetterkind, whose team fell to 32 in North Shore matches, rued the Owls’ slow start and noted that having one more player involved in the Slinger line-up could have made a big difference.”

“I told the girls that we waited too long to get started,” she said. “We need to go out and make things come to us.”

Vetterkind said the team has had to completely revamp its process in the last two weeks as junior outside hitter/libero Melia Johnson needs to “rest her body.”

“Most teams are a month-and-a-half into the season with a set line-up,” she said. “We had to change things a great deal and start over two weeks ago.”

And that lack of continuity showed up early in the match with Hartford. It was 11-11 in the first set, when the Orioles went on a 7-1 run to take control at 18-12. Budding freshman star Allie Beers did her best to keep the Owls in the first set with nine of her match-high 22 kills, but Slinger could get no closer than three the rest of the set.

Hartford built on that momentum in the second session, taking a 6-3 lead and
then ripping off 11 consecutive points to take a 17-3 lead. Several Slinger errors and a sound Hartford block, paced by senior Taylor Nolte and sophomore Katie Kuchevar, paced the run.

But in the third set, the Owls regained their footing, as in a back-and-forth effort with lots of long rallies, Slinger took control for good by breaking a 15-15 tie with a 7-2 run. Beers had two kills in that push.

That led to an epic fourth set that had the vigorous and loud crowd roaring throughout. Slinger took a 5-2 early lead, but then Hartford scored nine of the next 10 points to earn a 10-6 advantage. In a set that featured many lengthy rallies with excellent saves and digs, the Orioles held the Owls at arm’s length most of the way.

In fact, they seemed fully in control at 19-12, but the Owls did not fold their wings and hide in their nest. eiers and fellow freshman outside hitter Miley Quade fueled a rally.

Two kills in three points by Nolte seemed to have Hartford ready to close out the match at 22-17, but then Slinger scored six of the next seven points, as Beers scored the final four points of the comeback with three kills and a block.

But with the match tied at 23-all, the Orioles finally escaped and earned the victory behind two Slinger errors.

“That fourth set was amazing,” said Kutz. “It felt like everything mattered all at once. Everything all at that one time. It was just excellent!”

Klink, whose team has had several matches like this one this season already, just wishes the Orioles could make it easier on themselves.

“What can I say,” she said. “It’s a rivalry. The girls worked very hard this week (also beating Nicolet in a league dual on Sept. 20). We tried to focus and slow things down and we were really focused on number six (Beers).

“She’s a special player and got her kills but I think we held her in check.”

Vetterkind, whose team will host a qualifying tourney for the powerhouse West Best Sprawl on Saturday, is focusing on the positive.

“We have a relatively young team with seven seniors, three juniors and four freshmen,” she said, “and the kids are playing fantastic at times.”

Hartford was led by Joelle Melsheimer with 15 kills while Tess Freitag had eight. Libero Kim Busateri had 37 digs.

Klink said there is no time for the Orioles to rest on their laurels. They will come right back to Slinger for that Sprawl Qualifier on Saturday.

“And we could see them (the Owls) again,” she chuckled.

Stay up-to-date on all the latest Washington County sports news with a subscription: Click here