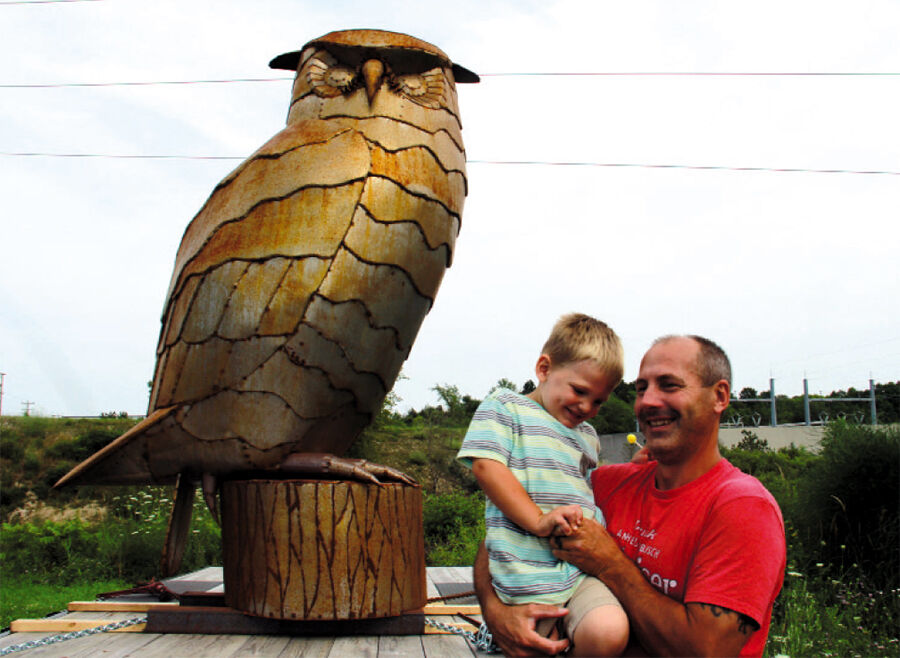 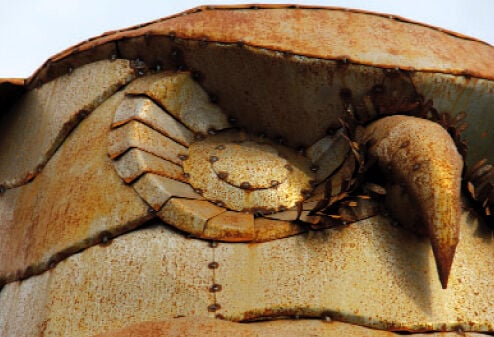 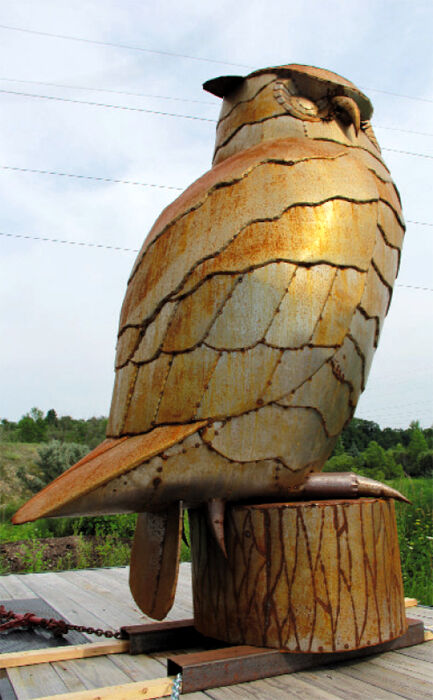 TOWN OF WEST BEND — A symbol of wisdom and vigilance, a 10-foot-tall steel owl is keeping watch over the comings and goings at Stoney Island in the Town of West Bend.

Jeff Schroer and Denise Tauscheck said the creature has been drawing attention from customers and travelers on Highway 33.

The sculpture is the work of West Bend resident Nick Rubisch.

Rubisch said he welded the 1,200-pound creature for fun.

“Not too long ago every store you went to had owls,” Rubisch said.

He has no formal welding experience, but as the owner of NSR Roofing, Rubisch picked up the skill because he does metal roofing and custom sheet metal work.

The owl has a framework made of high-strength Corten steel and Rubisch engineered the piece so he could move it around with a forklift.

Nick Rubisch, who has no formal welding experience, welded a 1,200 pound steel owl. He does have a background in custom sheet metal work.

serves as a protective barrier on the surface but will not continue to corrode and compromise the piece.

He started working on the bird about three years ago, taking a now-and-then attitude until he got close to finishing it up.

Rubisch has thought about giving it a name, but for now, he just calls it “the owl” and he’s satisfied with his work.

“It looks like an owl, that’s the main thing,” Rubisch said.

Schroer calls the sculpture “awesome,” and said it has attracted so much interest he’s threatened, jokingly, to charge Rubisch each time someone stops in to ask about it.

After appearing in a Fourth of July Parade on Big Cedar Lake, the owl was stationed just off Highway 33 for a few days.

Then Tauscheck said people started asking about buying the bird.

While she told them it was not for sale, Rubisch may be changing his mind about that.

He said he would sell the owl for the right price and while he has a figure in mind, he’s not ready to share it.

He bought the steel used for the sculpture in bulk and has started a second work, but he won’t reveal the subject yet.

“Hopefully I’ll finish this one in less than three years,” Rubisch said.