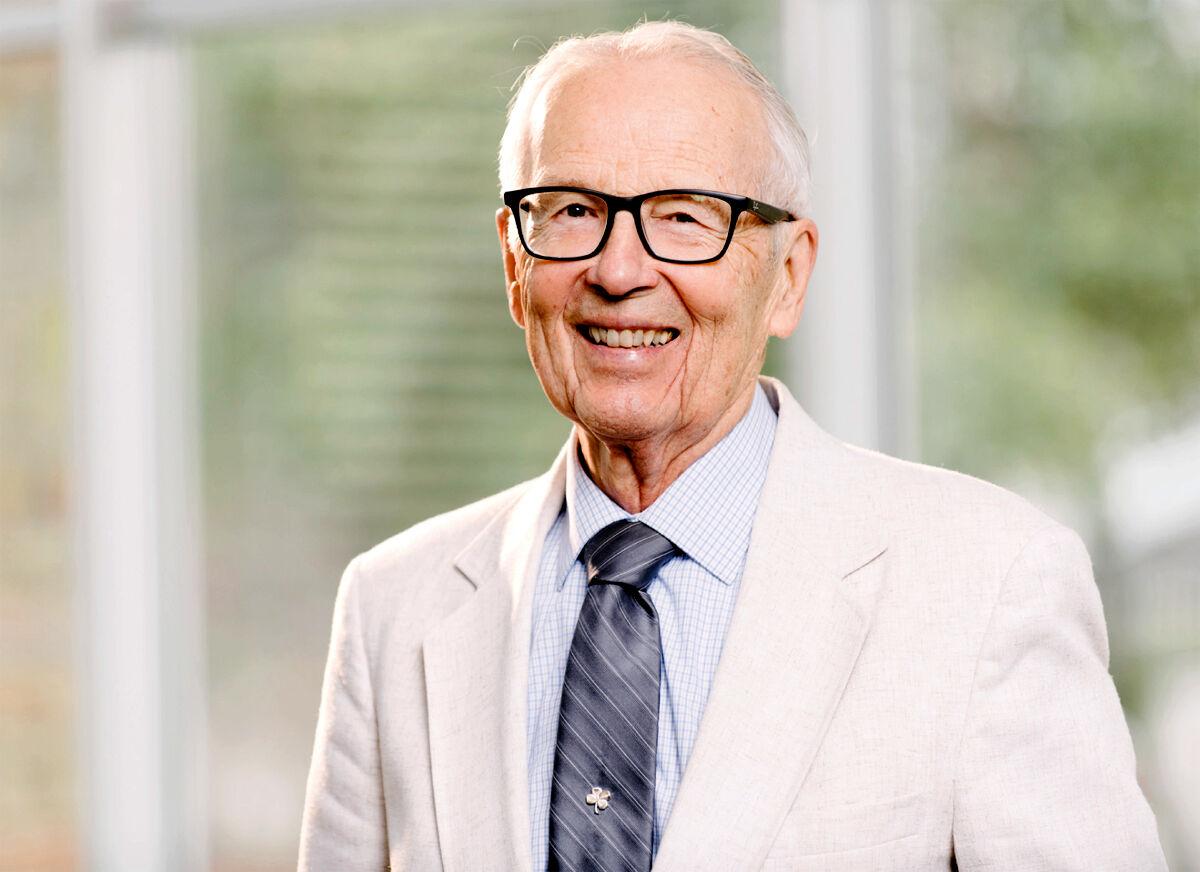 Don Taylor served as president and CEO of Waukesha State Bank for 25 years from 1969 until 1994. 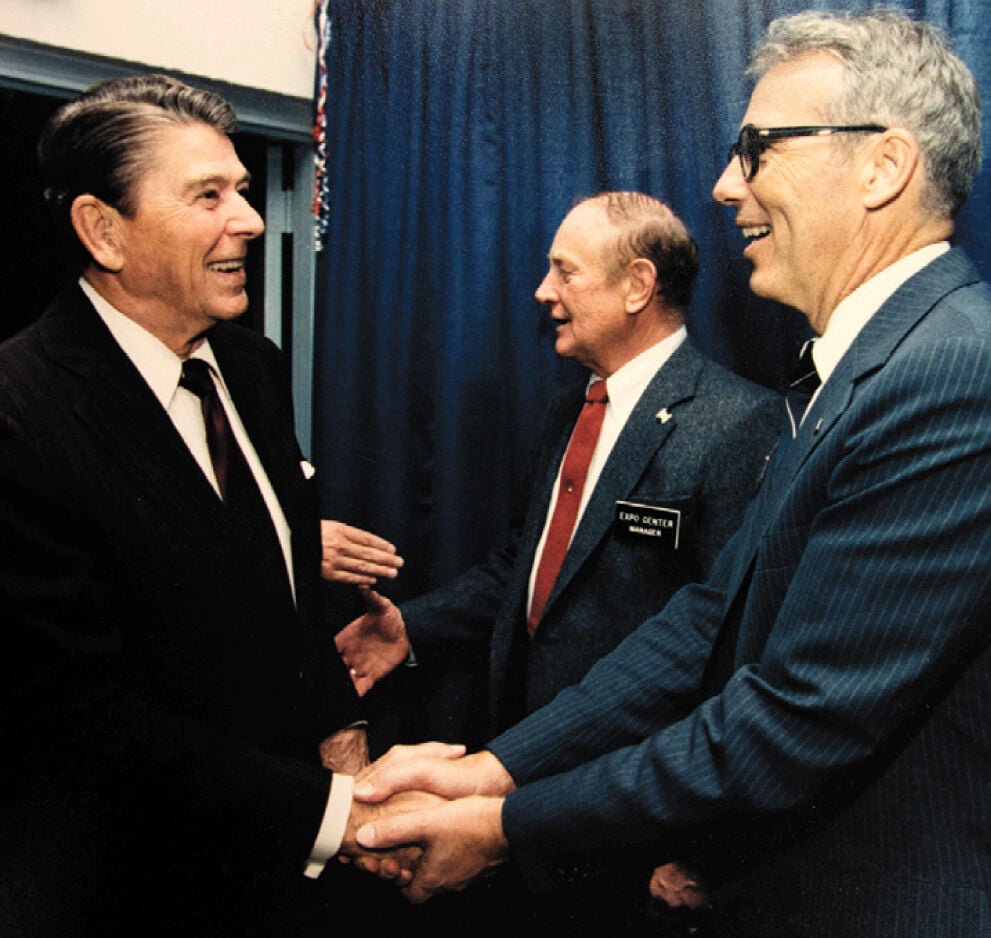 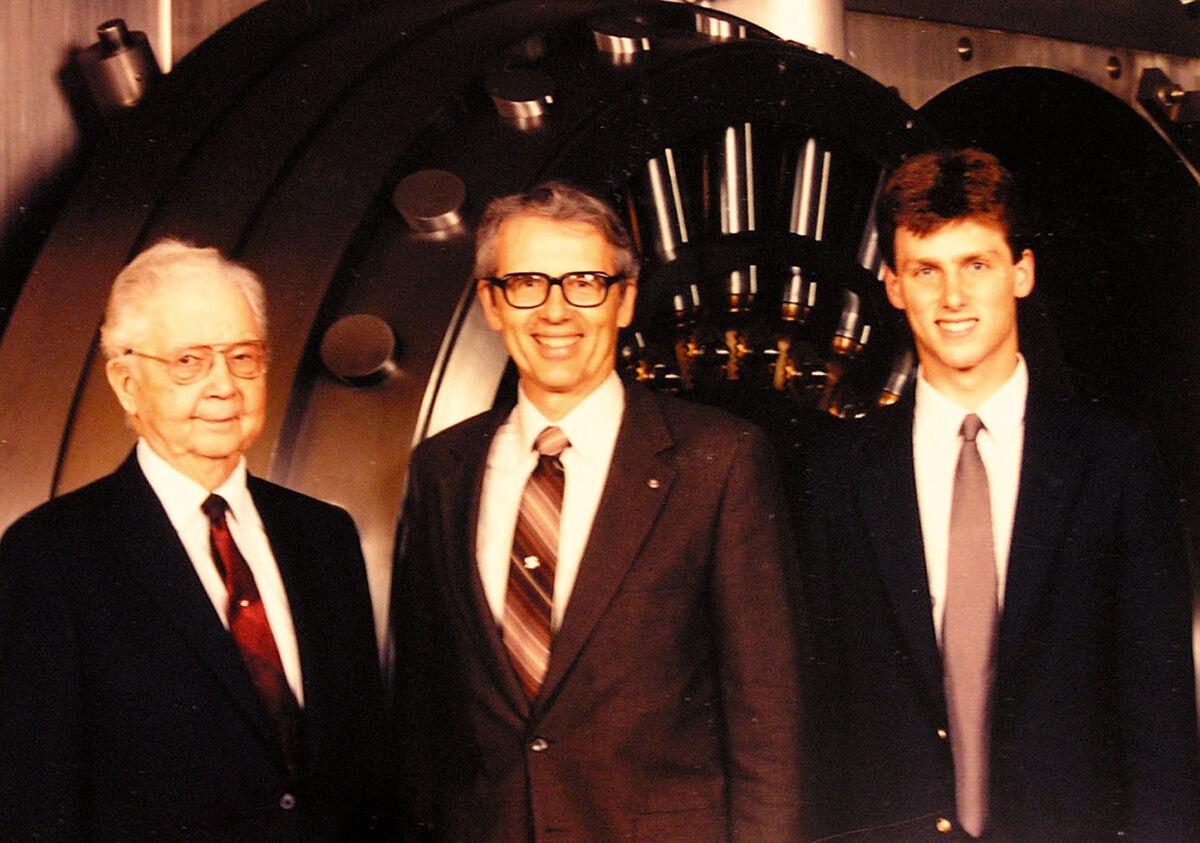 Waukesha State Bank founder Carl Taylor (left) posed in this January 1993 photo with his son Don Taylor and grandson Ty Taylor. All of them have served as president of the bank. 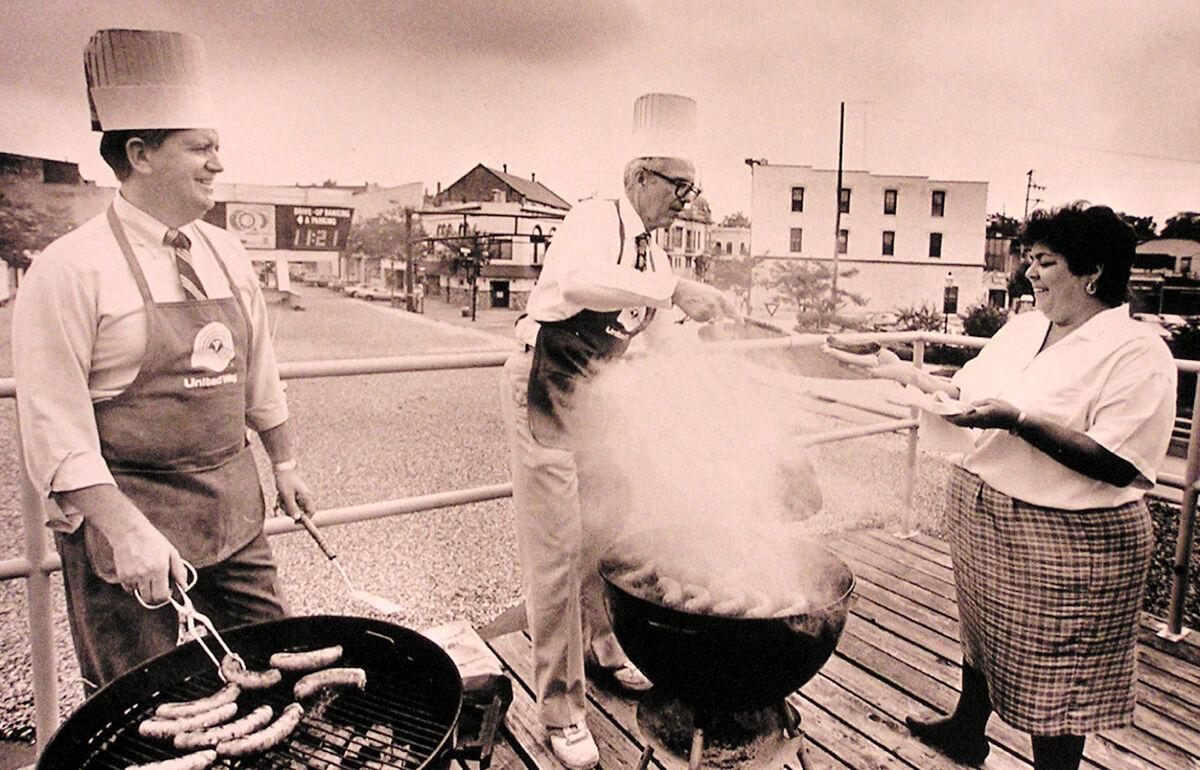 Don Taylor, center, who served as president and CEO of Waukesha State Bank for 25 years, serves up a sausage on the roof of the downtown Waukesha location. 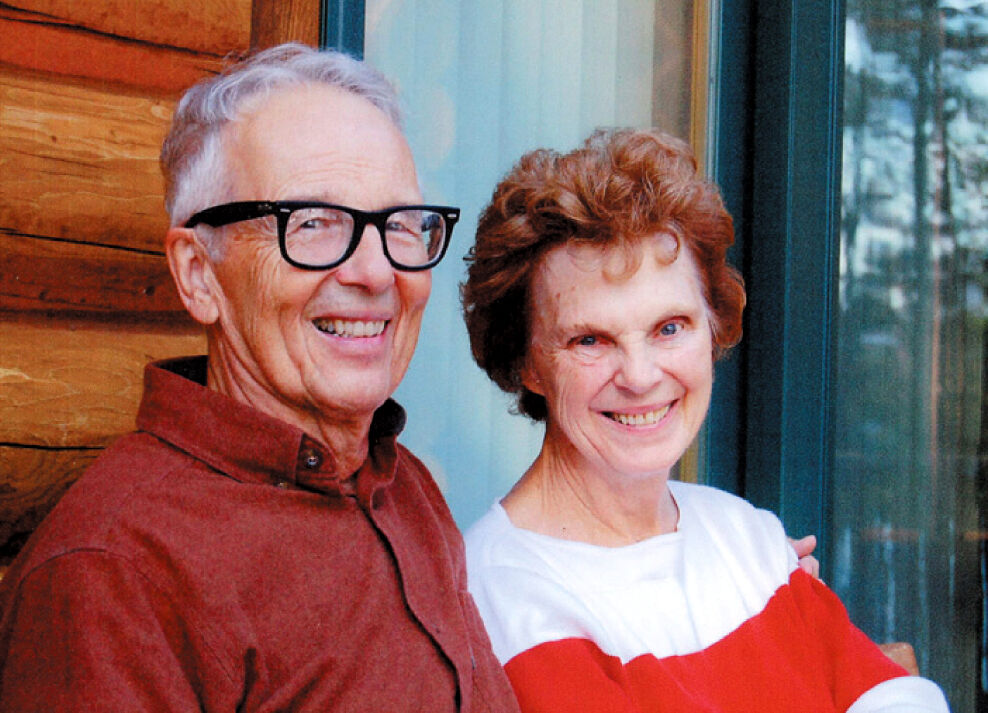 Don Taylor with his wife of more than 60 years, Carol. 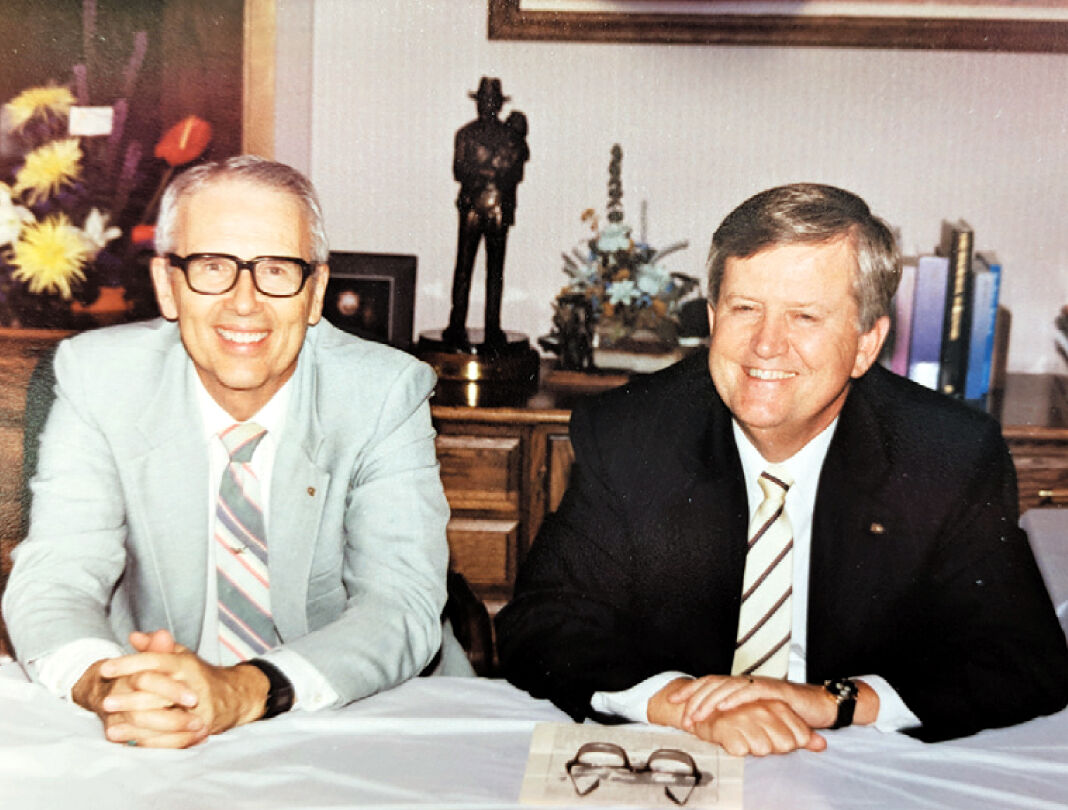 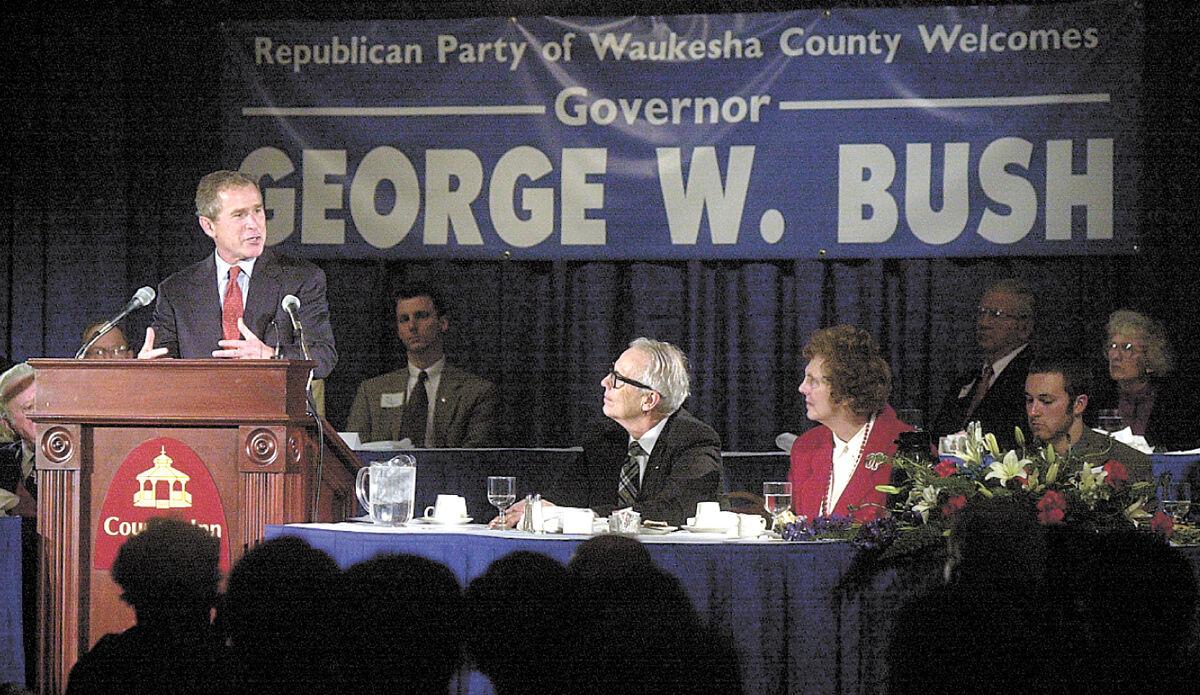 Don Taylor, center, sits with his wife, Carol, while they listen to then-Texas Governor George W. Bush speak in Waukesha.

Don Taylor served as president and CEO of Waukesha State Bank for 25 years from 1969 until 1994.

Waukesha State Bank founder Carl Taylor (left) posed in this January 1993 photo with his son Don Taylor and grandson Ty Taylor. All of them have served as president of the bank.

Don Taylor, center, who served as president and CEO of Waukesha State Bank for 25 years, serves up a sausage on the roof of the downtown Waukesha location.

Don Taylor with his wife of more than 60 years, Carol.

Don Taylor, center, sits with his wife, Carol, while they listen to then-Texas Governor George W. Bush speak in Waukesha.

During his 88 years of life, Don Taylor strove to help make his community a better place as the president and CEO of Waukesha State Bank, as chairman of the Republican Party of Waukesha County, as an active participant in civic organizations, as a family man and as a Christian.

His son, Ty, on Monday described his dad as his “hero.”

“He was just a wonderful role model, very positive person,” he said.

Don Taylor of Waukesha died Friday surrounded by his family at the age of 88. He was born in Waukesha on Dec. 16, 1932, the son of Carl and Alma Taylor. He graduated from the University of Wisconsin-Madison and served in the United States Army as a second lieutenant.

Taylor’s father, Carl, founded Waukesha State Bank in 1944, and, when Carl retired, Don succeeded him, leading the bank as president and CEO for 25 years from 1969 until 1994. His son Ty later became president and CEO of the bank.

On Monday, Waukesha State Bank released a statement saying “Don was an exceptional leader, fierce banking advocate and generous community supporter. While we mourn the loss of a very good man, we also celebrate his life and hope that it serves as an example of hard work, accomplishment and selfless generosity.

“Don touched so many lives, and we will especially remember his big smile, quiet demeanor and thoughtful leadership. We are grateful for his guidance and extend our condolences to the entire Taylor family.”

Stephanie Ohlfs, vice president – marketing manager for Waukesha State Bank, said up until about 2018, Taylor would park in the employee parking lot, cross the street and head to his office every afternoon for a few hours. Up until the pandemic he continued to work, but more sporadically.

“He worked up here almost until the end,” Ohlfs said. “Everyone still knows him … He was not like a figure from history that no one knew. He loved it and it gave him purpose.”

Through the years, Taylor was more than a leader in his bank, but in the larger business community.

Suzanne Kelley, president & CEO of the Waukesha County Business Alliance, described Taylor as an “icon in our community.”

Before it was the Waukesha County Business Alliance, the organization was named the Waukesha County Chamber of Commerce, for which Taylor served as the chairman of the board from 1974 to 1975, following in his father Carl’s footsteps who was chairman from 1954 through 1956.

“They had a tremendous positive impact on the business community as a whole,” Kelley said, adding that Don Taylor was the recipient of the Business Alliance’s annual Don Richards Leadership Award in 2003, which is given to a top leader in the county.

Taylor also chose to give back through many civic and service organizations, including the Waukesha Rotary Club where he was a 65-year Rotarian and past president.

Another major role for him was as chairman of the Waukesha County GOP, which he held from 1979 until 1989 and again from 1993 until 2013. He also was chair or cochair for President Ronald Reagan’s 1968, 1980, and 1984 Wisconsin campaigns. According to his obituary, Don and Carol attended Ronald Reagan’s 1981 inaugural, a memory he always cherished.

John Macy, a former chairman of the Republican Party of Waukesha County, described it as an “end of an era” when hearing about Taylor’s death.

“There was only one Don Taylor, that’s for sure,” he said. “He accomplished things that no one else would have been able to accomplish.”

For instance, Macy noted how Taylor was able to turn Waukesha County “totally red.” When Taylor first became a leader in the local GOP, Macy said the county was represented by both parties. Macy attributed that skill to Taylor being so well liked and his political acumen.

“He was a wonderful mentor and a great guy,” Macy said, adding it was all about the people for Taylor.

Growing up, Waukesha County Executive Paul Farrow knew Taylor as Mr. Taylor and it was only when he himself got into politics that he felt comfortable calling him Don, he said.

Taylor was a friend of his mother, Margaret Farrow, who had served as lieutenant governor, and also his employer when Paul worked at Waukesha State Bank while attending Carroll College.

Farrow recalled that when he decided to run for office in 2010, he spoke with Taylor who was still chairman of the Republican Party of Waukesha County. When he shared his plans, Taylor smiled as if to say “you finally got around to it, did you Paul,” Farrow said.

Farrow said he respected Taylor’s work at the bank, which helped many to get homes and through other financial services.

As the chairman of the local GOP, Farrow said, Taylor “really pushed what we do, how we do it, how we engage and how we help people who want to be elected officials as public servants do that.”

Waukesha Mayor Shawn Reilly said his father was friends with Don so he also grew up knowing of the Taylor family, but grew to know him even more as he got older.

“He has been such a leader in Waukesha County for more than 60 years with the good that he did for Waukesha County,” Reilly said. “He was such a good person. He was someone who was always willing to talk to people.”

“He would tell you what he thought but there was never any type of ‘this is what you have to do’, ‘I think you better do this,’” Reilly said. “He let people make their own decisions.”

Reilly also described Taylor as having a great sense of humor and as a person who would love to sit and talk and tell funny stories.

“He was someone that simple things gave him great pleasure and he was a pleasure to be around,” Reilly said.

Taylor is survived by his wife of 62 years, Carol, and children, Wendy Kipperman, Scott Taylor; Jenifer Schroeder, and Ty Taylor, and 10 grandchildren.

Carol recalls meeting Don when she was 15 and he was 20 while she attended camp and he was a lifeguard.

“He never took his eyes off me since then,” she said Monday.

They didn’t date until a few years later when she was older. Their first date was memorable: He took her to Lapham Peak where they ate a picnic meal her mom had prepared and she cooked over a campfire. It was also the first time he held her hand.

Carol said she was attracted to Don because he was kind, a Christian, very dedicated, a business man who wanted to help people and who lived politics.

He also loved the idea of freedom and liberty.

“He loved our free country and he very much wanted to sustain freedom,” she said. In fact, a room at their cabin is called the Liberty Room, in which Don hung a Liberty Bell.

The couple also enjoyed traveling together, and would attend concerts and play music. Carol said her husband loved music, especially symphonies, and would play the piano.

During their courtship, Don would write a letter to Carol every day while he was in the Army, even if all it said was “I love you.”

Private burial will be held at Prairie Home Cemetery for the family and close friends. A celebration of Don’s life will take place the afternoon of June 4 at Elmbrook Church. Further details will be announced in a future edition and be online at www.randledable.com.

Taylor took time for everyone

WAUKESHA — From lawyers to elected officials and bank customers to nonprofit leaders in Waukesha County, Don Taylor served as a mentor and an inspiration, always willing to listen and to help those who came to him with a question or in need of assistance.