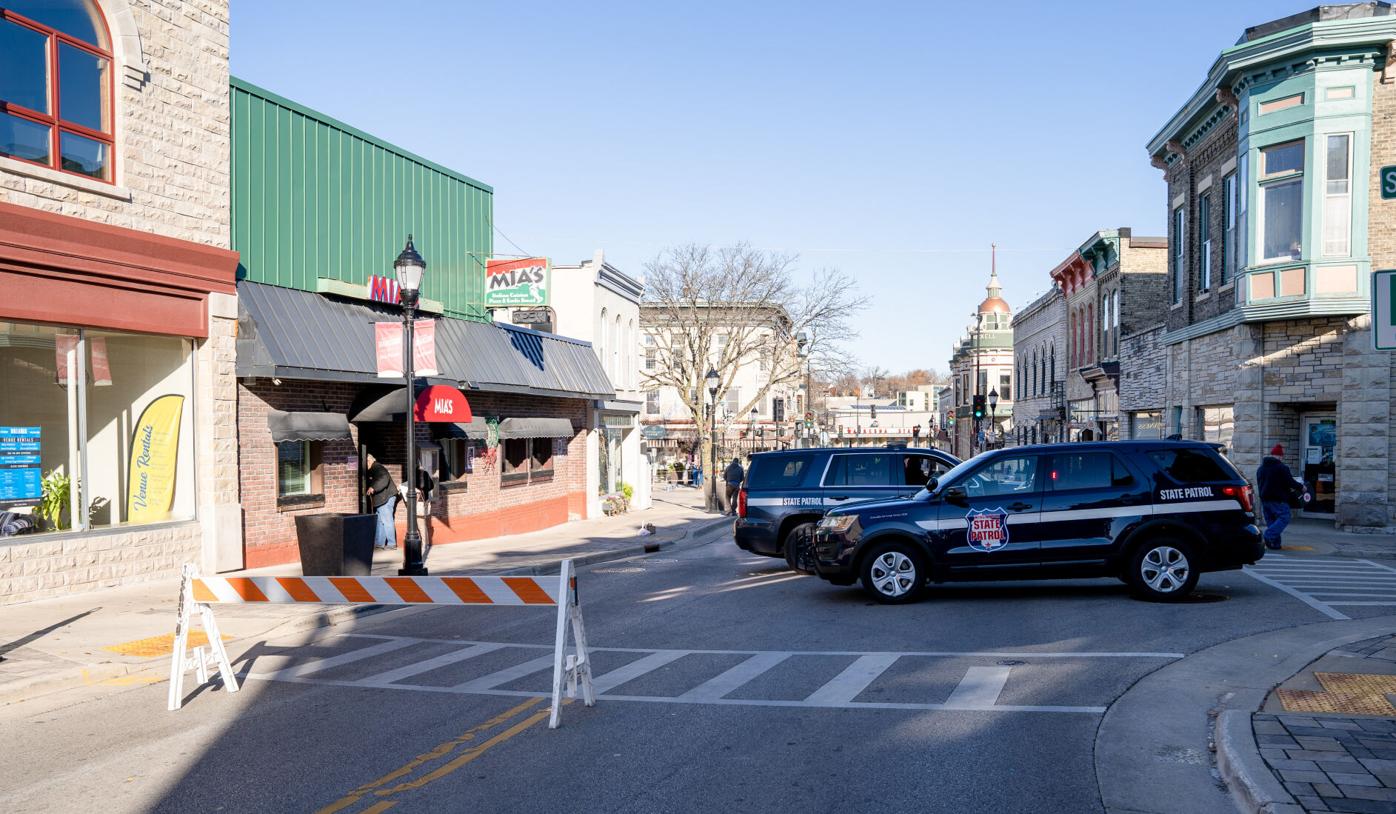 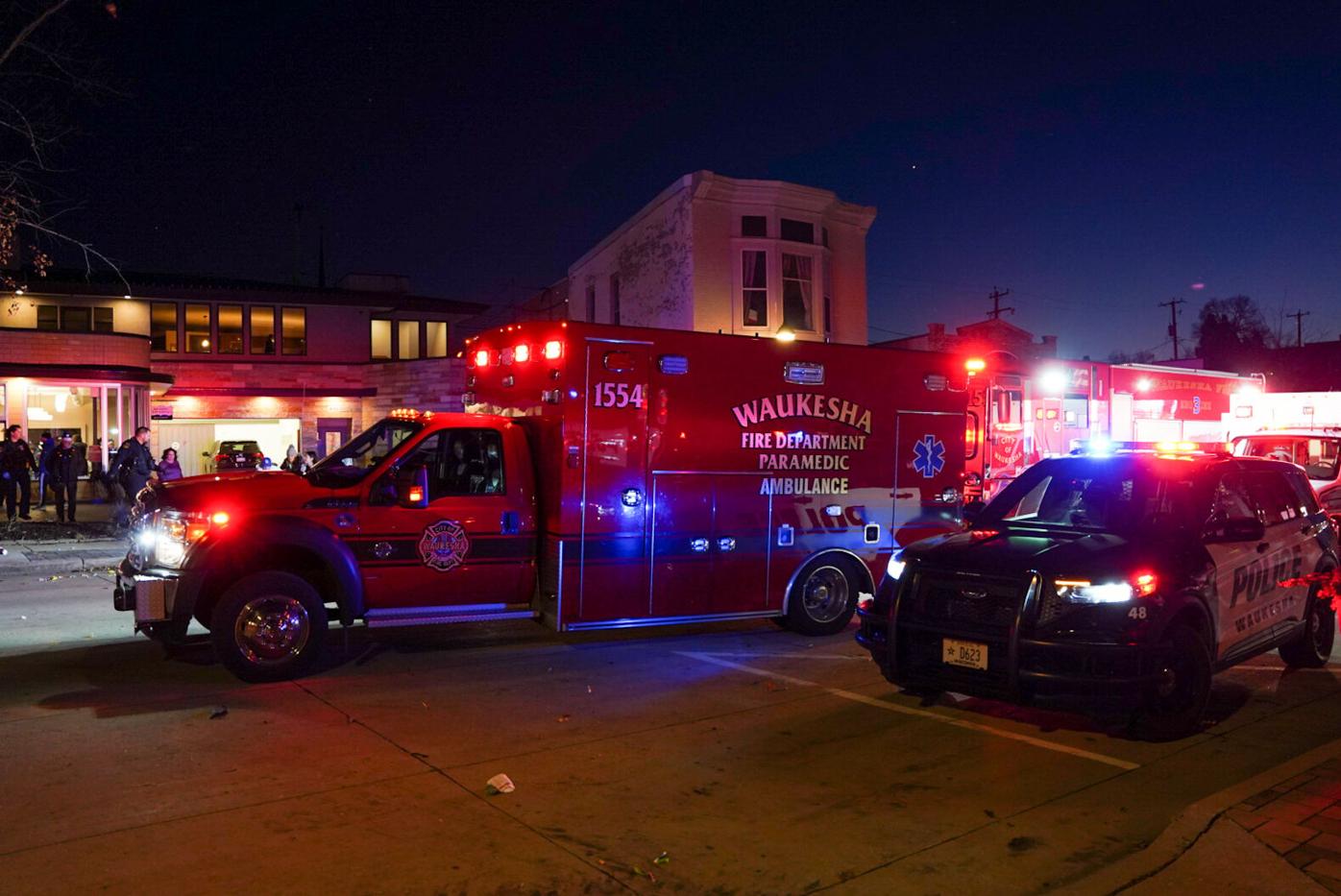 An ambulance and police car sit along North Barstow street after an incident occurred in downtown Waukesha today.

Police and fire units respond to an incident on West Main Street in downtown Waukesha today. 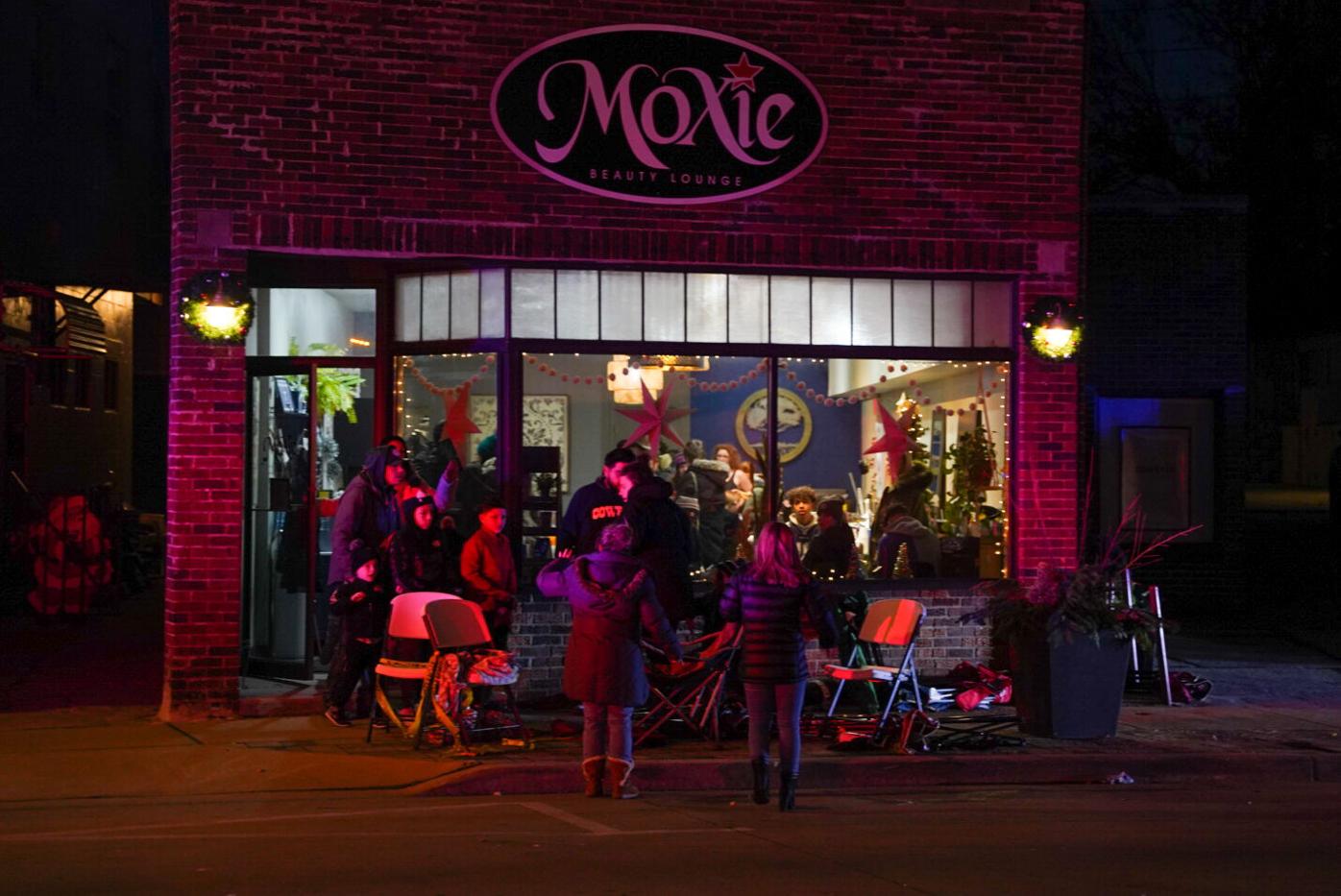 A crowd takes shelter in the Moxie Beauty Lounge after an incident occurred in downtown Waukesha today. 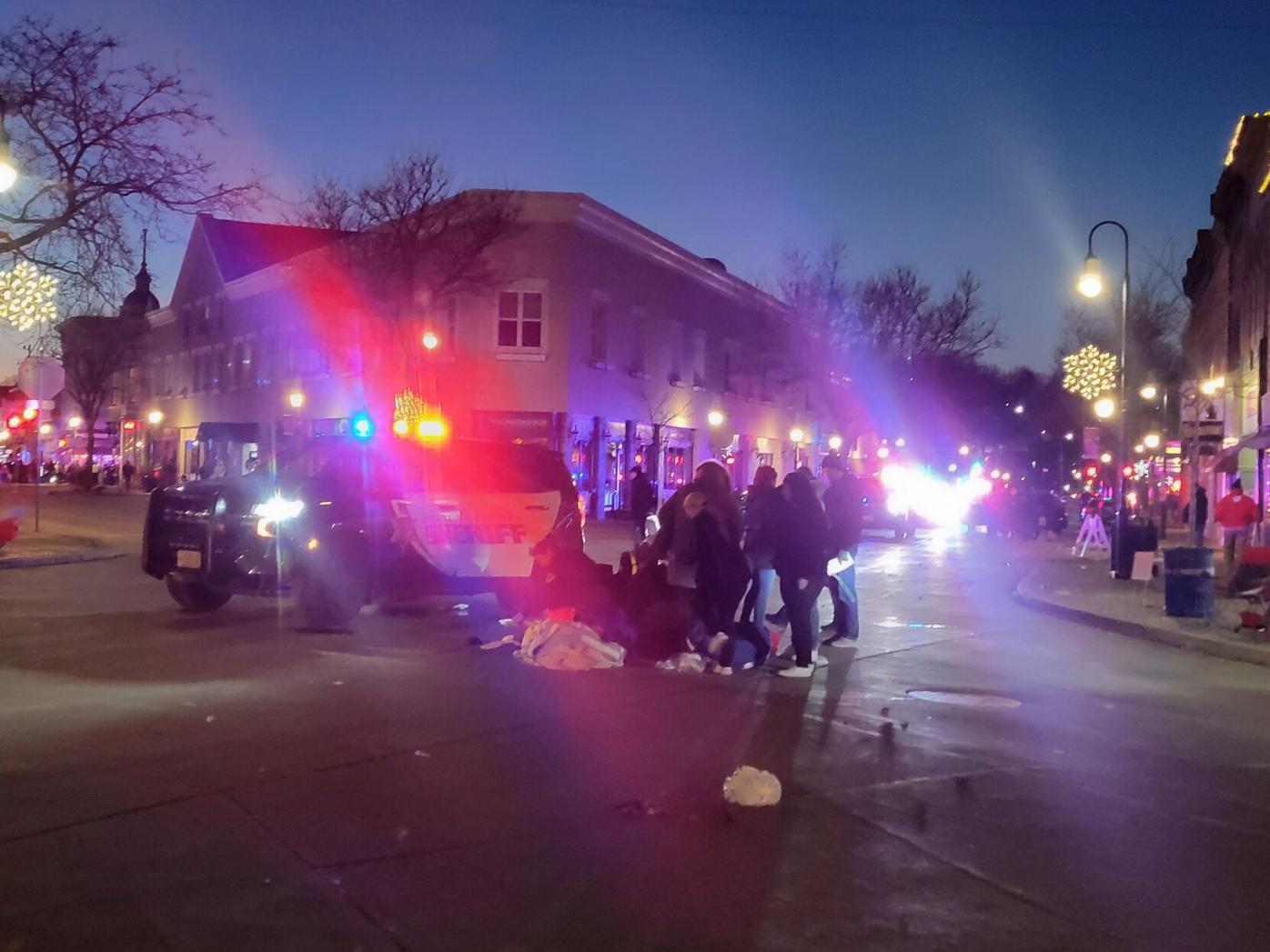 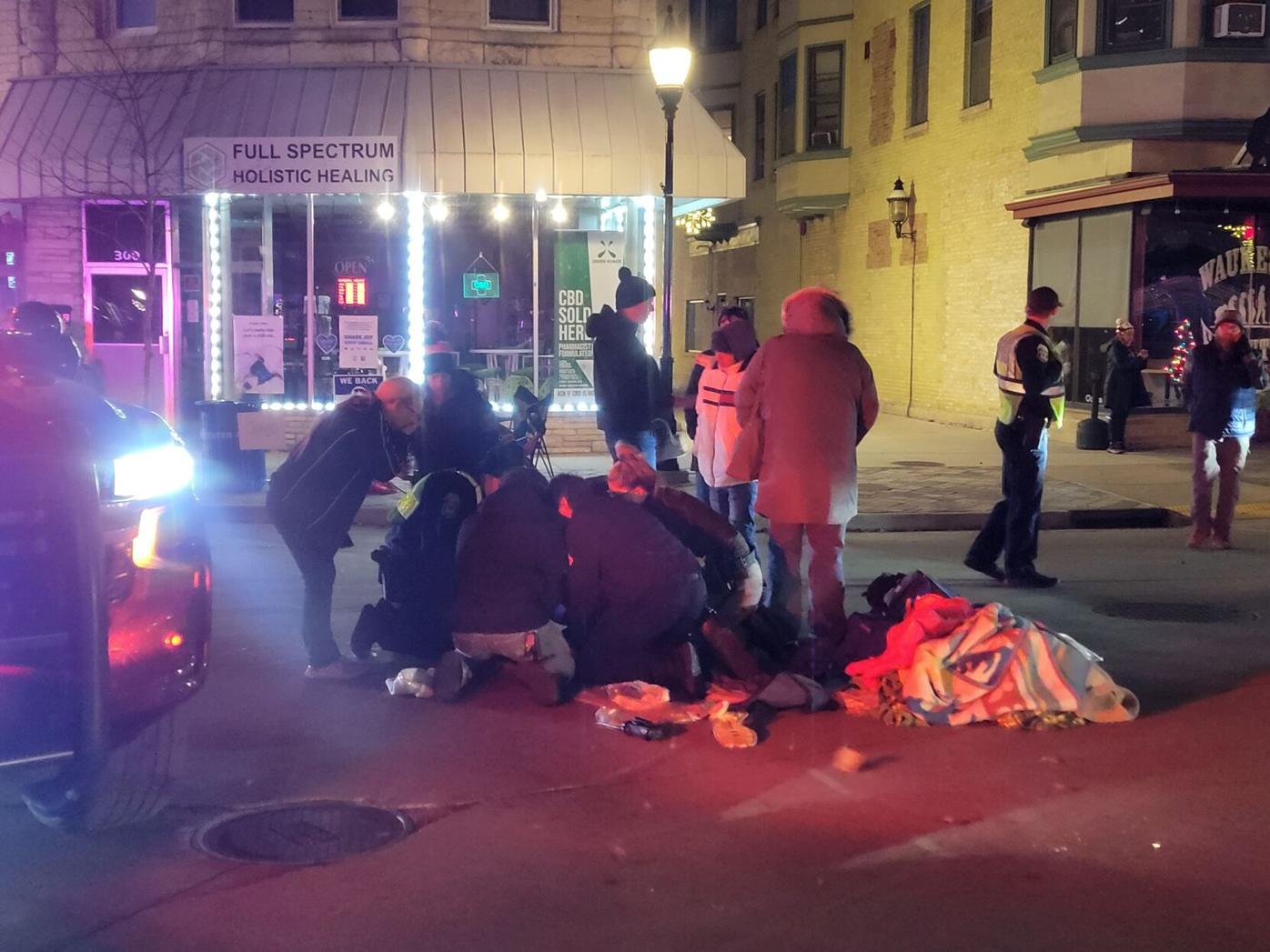 An ambulance and police car sit along North Barstow street after an incident occurred in downtown Waukesha today.

Police and fire units respond to an incident on West Main Street in downtown Waukesha today.

A crowd takes shelter in the Moxie Beauty Lounge after an incident occurred in downtown Waukesha today.

WAUKESHA, Wis. — The man suspected of plowing his SUV into a Christmas parade in suburban Milwaukee, killing at least five people and injuring 48, had been in a domestic disturbance just minutes before, Waukesha's police chief says.

Police Chief Dan Thompson says there is no evidence the crash on Sunday was a terrorist attack.

He says police are drawing up five charges of intentional homicide against Darrell Brooks, 39, of Milwaukee.

Thompson identified those killed as four women ages 52 to 79 and an 81-year-old man. Members of the “Dancing Grannies” club were among those killed, as was an employee of Citizens Bank.

According to the chief, police were not pursuing the suspect when he entered the parade route, but an officer did fire a shot to try to stop him but ceased firing because of the danger to others. The driver was not injured.

THIS IS A BREAKING NEWS UPDATE.

WAUKESHA, Wis. — At least six children injured when an SUV plowed through a Christmas parade in Waukesha are listed in critical condition.

Waukesha police say that all told, at least five people were killed and more than 40 hurt in the tragedy Sunday.

One person has been taken into custody, and a law enforcement official speaking on condition of anonymity tells The Associated Press that investigators are looking into whether the driver was fleeing a crime involving a knife at the time.

Doctors say 18 patients between the ages of 3 and 16 were taken Children's Wisconsin Hospital. They include three sets of siblings.

Those injured suffered serious head injuries, broken bones and scrapes on their faces, with six people operated on Sunday night and two more in surgery on Monday.

THIS IS A BREAKING NEWS UPDATE.

WAUKESHA, Wis. — The City of Waukesha, Wisconsin, says at least 5 people died and more than 40 were injured after an SUV sped into the Waukesha Christmas parade.

Before the parade began, the vehicle was seen swerving around parade participants on Whiterock Avenue, including The Freeman van. Police vehicles with sirens and lights activated followed soon after, and then a fire truck.

The crowd that had gathered to watch the parade began dispersing suddenly and with urgency. People were heard calling for family members in a panicked state — a man was shouting a girl's name from the historic courthouse building's steps.

Multiple people from the Waukesha South High School Band were struck by the vehicle on West Main Street. Instruments were also seen scattered on the street, amongst victims.

“My son just passed with his band, which is Waukesha South, and a truck (came) barreling through, almost hit the back of a float truck … he ended up hitting a bunch of band members and it went all the way up the road.”

Monfre was collecting some of the instruments for South, he said. He said he got in contact with his son, who wasn’t one of the ones that got hit, but almost was.

“I was calling for my son but I was also helping others that were injured, making sure that they were stable, talking to some of them, just making sure that (they could hear a comforting voice).”

“Unfortunately my two younger siblings are in the South band and we went over here to try to see if we could find them … my siblings are OK as well, but there’s just unconscious people everywhere. From the corner here and down there’s just blocks of people on the ground … that’s literally all we saw is a red (vehicle) come smashing into one vehicle, flying by, hitting a lot of people in the process.”

Allen Kind, a Horning Middle School Tech Education teacher attending with the school district, said he was in front of Divino Gelato Cafe and saw the red SUV "proceeding rather fast."

Kind said he saw one of the children get hit and upon seeing blood coming from his nose and mouth advised him to lay on his side. “I didn't want him choking on his blood,” he said.

"I saw at least five people get hit and I don't know where that vehicle stopped," Kind said. "I saw those kids falling... I knew that if that was one of my kids I'd want somebody there immediately."

"I'm sitting right in front of Allo! Chocolat and he was somehow able to get into the parade and he started running people over," said Mark Schram, a Waukesha native who lives in Darien.

Inside Martha Merrell’s immediately after the incident, a kid was seen with a bandaged head and a bleeding face. He was conscious and exited the business with others escorting him. Others inside the business were heard speaking or making panicked calls to family.

Inside Martha Merrell’s, Tyson Apfelbeck said he saw the suspect "literally just running people (over) and swerving pretty erratically." He said in his assessment people were hit intentionally, and estimated the vehicle to have been traveling at about 20 miles per hour.

The Associated Press contributed to this story

For the latest news on the Waukesha Christmas Parade tragedy, click here.