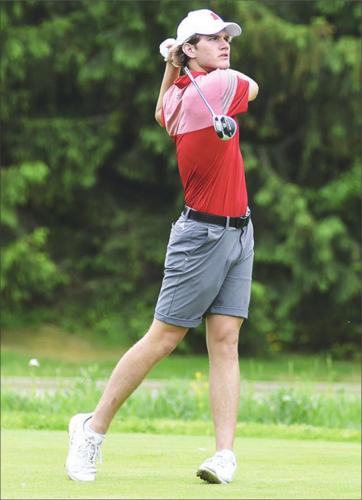 Homestead senior Joe Fricker hits a tee shot Tuesday during a WIAA Div. 1 boys golf sectional meet at The River Club of Mequon. The Highlanders took first place in the team standings by one shot to advance to the state meet set for Monday and Tuesday at Blackwolf Run. 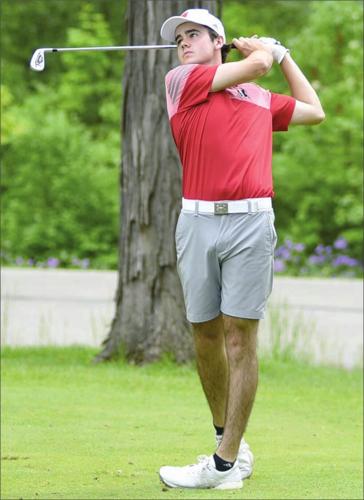 Homestead senior Oliver Maleki hits a tee shot Tuesday during a WIAA Div. 1 boys golf sectional meet at The River Club of Mequon. The Highlanders took first place in the team standings by one shot to advance to the state meet set for Monday and Tuesday at Blackwolf Run.

Homestead senior Joe Fricker hits a tee shot Tuesday during a WIAA Div. 1 boys golf sectional meet at The River Club of Mequon. The Highlanders took first place in the team standings by one shot to advance to the state meet set for Monday and Tuesday at Blackwolf Run.

Homestead senior Oliver Maleki hits a tee shot Tuesday during a WIAA Div. 1 boys golf sectional meet at The River Club of Mequon. The Highlanders took first place in the team standings by one shot to advance to the state meet set for Monday and Tuesday at Blackwolf Run.

MEQUON — Long before Tuesday’s WIAA Div. 1 boys golf sectional meet was decided by one shot, Homestead head coach Steve O’Brien remarked that it is amazing how often a tournament comes down to a single swing of the club.

By the end of the meet at The River Club of Mequon, the veteran coach’s words proved to be prophetic when the Highlanders won a sectional championship by a shot with a combined 18-hole team total of 312, followed by Kettle Moraine, which carded a 313 to also qualify for the state meet. Arrowhead (315), Germantown (316), Sussex Hamilton (316) and Oconomowoc (321) were all within striking distance.

“I keep pounding it into these guys, you have no idea how many times things come down to that stroke, one stroke,” he said. “What happens again today? One stroke.”

That hardly came as a surprise to O’Brien, who noted that the sectional featured an absolutely stacked field. In fact, just qualifying for the second tournament of the postseason was no easy chore, especially since Homestead was the final of four teams to qualify in regional play a week earlier at Mee-Kwon Park.

“Everybody knows about this sectional. It’s not fair. It just isn’t,” the Homestead coach said. “There are some really good teams, really good individuals not being able to play (at state).

“With that in mind, to come out on top against all these powerhouse teams really is a special day, special feeling for us. You work hard and your goal is always to get to state. Knowing that path is even harder, our guys really buckled down,” O’Brien added. “They have the physical tools, but what I’m most impressed with is where we’ve come mentally in our management of the golf course and keeping ourselves grounded in the moment.”

While every shot along the way counts the same as any other, junior Hunter Thibert came up with one of the key swings of the afternoon. He had an eagle on his final hole of the meet, holing out on his second shot on the par-4 18th hole.

“I hit a pretty good drive,” Thibert said about the finishing hole. “I had like a 35-yard chip and just chipped it on the green and it rolled in like a putt.

“I watched it go in the hole,” he added. “It was pretty cool listening to my parents and the people that came to watch me (cheer).”

Thibert added he was unaware of the significance his shot had at the time, but he certainly understood the magnitude when scores began coming in as others finished their round.

“I didn’t actually really know where we were at. I don’t like to check the leaderboard the whole time. I need to play golf and it ended up working out for us,” he said. “It was pretty special looking at the board and thinking, ‘Wow, that was kind of a big chip.’” Thibert picked things up over the final three holes, posting a birdie on the par-3 No. 16, a par on 17 and his eagle to wrap things up.

“We talked about how these last three holes were going to determine this tournament. It did every other year we’ve been here, whether it’s regionals or sectionals, those three holes sneak up on you here,” O’Brien said, noting that the challenge is finishing strong after a long day on the course. “No other athlete in high school sports has to deal with the length, the time period, of being mentally tough like golfers do. It’s learned thing, like anything else, and he’s able to hang in there.”

That finish also did not hurt the confidence of Homestead’s final two golfers to finish their round. Luke Ladd had a par to wrap up his day and Joe Fricker added a birdie.

“They heard the roar and were thinking, ‘I hope that’s for us,’ and low and behold, it was,” O’Brien said, noting news of success by a teammate slowly trickles around the course. “That’s a big splash and all that makes a difference.”

Thibert led the Highlanders with a score of 74, which included playing the back-nine 2-under-par for a total of 34 after going out in 40 on the first nine holes.

“Front nine, it wasn’t going so hot and I was like, it’s either now or never,” said Thibert, who jump-started his late run with an eagle on the par-5 12th hole. “I just managed to turn it on and make a couple eagles.”

Homestead made the turn in second place with a total of 158, trailing Arrowhead’s 156 and just one shot ahead of both Germantown and Kettle Moraine. O’Brien said the team had confidence heading into the final nine in that position.

“Our guys, most of them, like the Highland better than the Woodlands, so we said, OK, let’s use that to our advantage. Let’s grind through the first nine holes, do the best we possibly can, and then if you’ve taken care of that, let’s go free and easy,” he explained. “We had a nice game plan for the back nine.”

Ladd played a big role in putting Homestead in a position to advance with his play on the front nine. He shot an even-par 36 on his way to a 77 for the day.

“He changed his putting grip, and it’s one of those things where as a coach, you go, ‘Is this really the time to do that?’ But he was confident in it, so if he’s confident in it, I back off and let him go, and it worked today,” O’Brien said. “He was rolling it really well.”

Beyond that, the key was that Homestead took some valuable lessons from the regional meet.

“We learned from what didn’t go well last time,” O’Brien said. “It’s easy to accept the good ones (shots). We talk about acceptance. One goes where you don’t want it to go, are we doing what we can control, accepting it, and then hitting the best possible shot from there.”

By doing that, Homestead will return to the state tournament. The two-day, 36-hole will be held at Blackwolf Run on Monday and Tuesday.

“We actually get to play it during the season,” Thibert noted, “so not that I’m saying we’re pros there, but we’re definitely a little bit familiar with the course.”

O’Brien added that it was cold and windy when the Highlanders last took back a club at the course, but said there is certainly a benefit from having played there this season.

“Just being out there to see the holes,” he responded when asked what the team gained from their previous round there. “Every time you play a course and you get that experience, it’s going to help.

“We feel great for the opportunity and we’re going to go and do the best we possibly can.”

Cedarburg junior William Haney also competed at the sectional meet, shooting an 18-hole total of 93. However, unlike the regional where he advanced to the next round of the postseason as a qualifier by posting one of the top scores by a player on a team that did not advance, his season came to an end.