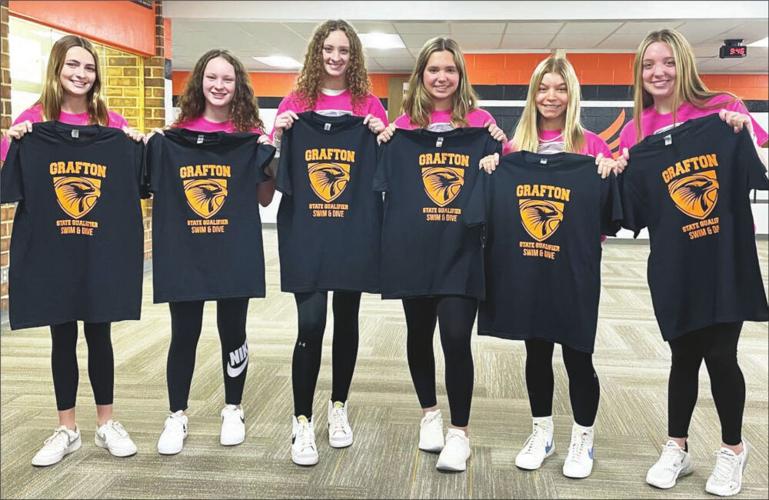 Members of the Grafton girls swimming and diving team pose for a photo before leaving school to compete at the state meet. From left are Sophie Schumaker, Kylee Grimm, Halle Grimm, Lola Michel, Maranda Uttke and Libby Michel. 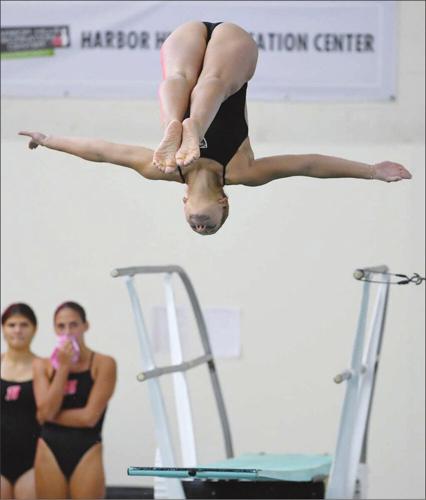 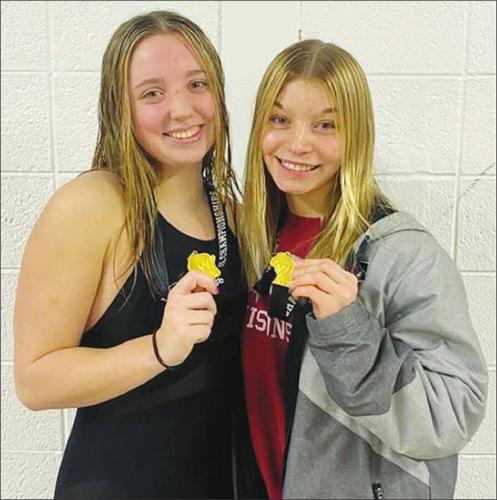 Members of the Grafton girls swimming and diving team pose for a photo before leaving school to compete at the state meet. From left are Sophie Schumaker, Kylee Grimm, Halle Grimm, Lola Michel, Maranda Uttke and Libby Michel.

WAUKESHA — Somewhere along the way, Grafton seniors Libby Michel and Maranda Uttke came up with a shared goal of winning a state championship medal to wrap up their time competing as high school athletes.

Their opportunity to accomplish the lofty goal came Friday at the WIAA Div. 2 state championship meet and the Black Hawks’ duo did exactly what they set out to do, with Uttke taking first in diving and Michel winning the 200-yard individual medley during a meet held at Waukesha South High School.

“It was really exciting to see both of us accomplish our goals together,” Michel said. “When I found out Maranda won diving, it really motivated me to win my 200 IM as well. We really pushed each other in that sense, and it really paid off.”

Uttke had her opportunity first, competing earlier in the day.

Qualifying for the state diving meet was nothing new for her, but she admitted that having been in the competition before did not necessarily make things any easier even though she had earned a state medal in each of her three previous appearances at the final meet of the season.

“It’s still the same nerves,” she confirmed, even though she already had placed sixth as a freshman and third the past two years.

In fact, there was a different type of pressure on Uttke this time around, as she was perceived to be the favorite going into the meet. The two divers that finished ahead of her last year had graduated and she arrived at Waukesha South with the top score in sectional competition.

“I was really nervous because there was a ton of pressure on me,” she admitted. “The beginning of my meet was a little rusty, I will say that, but I got (in a better) mindset, I tried to come out of it (a rusty start) and do something great.”

After the preliminary round, Uttke was in fourth place with 193.75 points, trailing Madison Miracle of the University School of Milwaukee/Brown Deer co-op, who led with a score of 212.65. Whitnall sophomore Rianna Dobbie moved into the lead after the semifinals, with a total of 314.60, followed closely by Miracle (308.80) and Uttke (306.75). Uttke made her charge to the top of the podium over her final three dives, finishing with a winning score of 431.80. Whitnall senior Kiera Wilson finished in second with 415.00 and Miracle claimed third with 412.35.

“It felt amazing,” Uttke said about her victory. “I was in third place before the last three dives and when I went over and they told me I was in first place it was a really good feeling.”

Uttke added that there were mixed emotions as she stood on the top step of the podium.

“It really hasn’t (sunk in yet). I know it will soon. Right now, I’m just really, really proud of myself for how I’ve done,” she said “It feels really great to wear this first place medal.

“It’s so surreal that my high school season is over and I ended it on a really good note,” Uttke added. “I’m very proud of myself.”

She was also proud of her improvement through the years.

“I definitely improved over the years and I could see that,” Uttke said.

She became just the second diver in program history to win a state championship. Ali Bunting was the first to take gold, accomplishing the feat in 2000.

After doing her part, she could relax and watch Michel take her shot at a state championship.

“I was waiting for that moment when diving is done and I can just relax and all my nerves are gone,” Uttke said. “She’s going to do amazing. I know it.”

The swimming portion of the meet commenced about 90 minutes after Uttke was awarded her medal and it started on an ominous tone for Grafton. The Black Hawks competed in the opening event of the session, the 200 medley relay. Unfortunately for the entry of Libby and Lola Michel and Halle and Kylee Grimm, the team was disqualified after posting a time of 1 minute, 52.66 seconds, which would have been good for seventh place.

Michel got her shot at the individual medley a few events later and made the most of it. Her time of 2:04.00 was comfortably ahead of the 2:05.52 turned in by runner up Izzy Bloom, a sophomore from Edgewood.

“It felt incredible to win the 200 IM. It was such a great feeling to accomplish my greatest goal for this season,” she said. “Being up on the podium was really special, just being able to feel the excitement in the pool and get my motivation up for the rest of my races that night.”

As for the race itself, Michel was closer to the state record of 2:03.00 set by Shorewood’s Rachel Munson than Bloom was to winning the race.

“I was pretty happy with my performance in that race,” she said about her championship swim. “I really just went into this meet wanting to have fun and to just be grateful that I’ve had this opportunity to race at my last state meet.”

That was the second of four events for Michel. She was back in the water a few events later to swim the 500 freestyle. The University of Cincinnati recruit was back on the podium after that race, taking third with a time of 4:57.87. She battled Whitefish Bay senior Casey Stephens for second place in that event, with her Ozaukee Aquatics teammate holding her off with a time of 4:56.60.

“My 500 went really well and I was happy with getting third, behind one of my club teammates, Casey Stephens,” Michel said. “It was a lot of fun being able to swim and race next to her. We really pushed each other and we were both really happy with our times in that race.”

Michel had one more swim in her prep career, and that came in the 200 free relay, along with her sister, Lola, and the Grimms.

“I went into it just trying to have fun on my last race of the night,” Libby Michel explained. “I think I ended my High School Swim career off well with that relay finish.”

Halle Grimm then finished her time in black and orange in the 100 backstroke, posting a solid time of 58.22 to take eighth place.