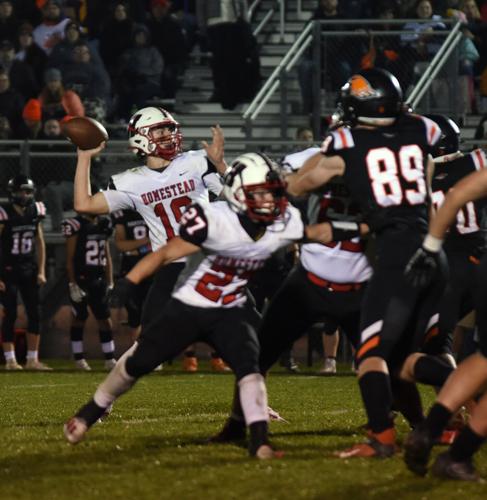 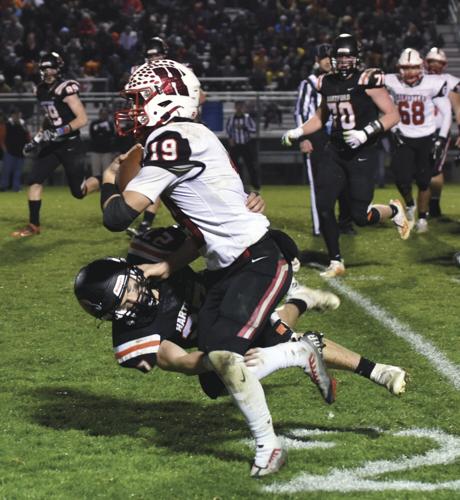 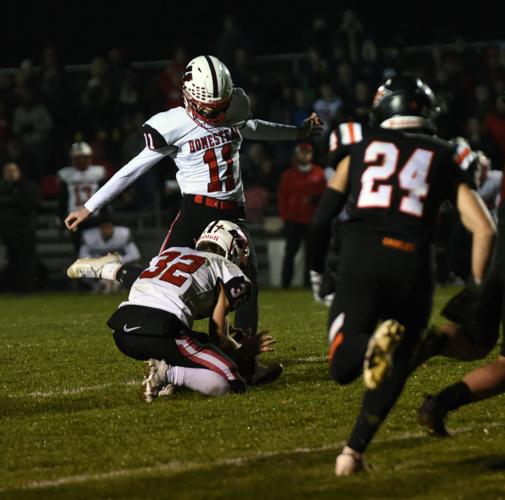 HARTFORD — Most football coaches believe that special teams impact a game every bit as much as the offense or defense.

Homestead seniors Myles Kelly and Xavier Smith stormed through the line to block a Hartford punt, senior Nick Woldt recovered the ball and returned it to the Orioles’ 13-yard line, and junior Sean West kicked a 23-yard field goal with 34.1 seconds remaining to lift the Highlanders to a 10-7 victory.

Homestead, seeded fifth in its bracket, climbed to 7-4 and advanced to host sixth-seeded Kaukauna in a Level 3 game at 7 p.m. Friday. Hartford, the bracket’s top seed, finished 8-3.

“In an even game like this, if you can have a splash play on specials, it could be the difference, and it was tonight,” Homestead head coach Drake Zortman said. “It was two good teams who are familiar with each other playing a one-game showdown. Hartford’s kids. ... Man, they play hard. Their defense was so good.”

West was credited with the decisive points, but he directed the spotlight toward his teammates afterward.

“It all feels like a dream right now,” West said. “I just went out there and did my job. I think we have to give credit to our offense and defense. Our defense made a bunch of great stops and our offense put me in position to win it.

“And our special teams play was definitely big tonight. I’ve got to give a lot of credit to the punt block.”

That was the undisputed play of the game. The two instigators shared their perspectives of it.

“We called a punt block on the play,” Smith said. “I heard a thump. We both hit the ball, then it rolled and we saw No. 5 — Nick Woldt our outside linebacker — pick it up and just start running.”

“We’ve been practicing that punt block for a long time,” Kelly added. “To be honest, I really didn’t know what was going to happen when it was called.

“A guy blocked down, and we both ripped it off the line and dove for the ball. I heard a thump, landed on my back, and looked up and saw No. 5 picking it up 5 yards away.

“That was our first punt block this season.”

The reward was priceless. “Our coach told us we have to strive to have the best special teams in our conference,” Smith said. “We couldn’t have won this game without them. They’re very important.

“Most of our kickoffs went into the end zone so they had to start at their 20. Our punts backed them up. And the punt block was huge.”

Hartford scored with 2 minutes, 33 seconds remaining on Sept. 16 to win the first meeting of the season between the teams. The sequel was also close, but much lower-scoring than the original.

“We were inconsistent early on this year,” Zortman said. “We played well the first time against Hartford, but we gave up three first-half touchdowns and a fourth-quarter touchdown drive the last time.

Homestead opened Friday’s scoring on the first play of the second quarter when senior quarterback Sal Balistrieri struck paydirt on a 24-yard keeper after an option fake. West’s point-after kick put the Highlanders up 7-0.

The Orioles pulled even with 14.5 seconds left in the second period when senior Noah Deibert completed a six-play, 64-yard drive with a 2-yard touchdown run. Senior Maddox Pratt’s extra point knotted the score and it stayed that way until West’s field goal.

“It all came down to our punt getting blocked, but our offense just couldn’t move the ball,” Hartford head coach John Redders said. “We couldn’t get past the 50yard line and finish other than the one drive.

“Our defense had a tremendous game. We pretty much kept them in check except for the one drive. Then they blocked our punt. We knew it was coming, but we didn’t get it off fast enough and a couple of guys missed a block.

“Homestead was prepared tonight. Coach Zortman did a good job. If they play like they did tonight, they’re going to go far. We just made one too many mistakes tonight.”

Smith was asked what made the difference in the rematch.

“It’s been a lot of practice time, and our mentality has changed so much since the last time we played Hartford,” he said. “At that point in our season, we were so down on ourselves. Since then, we’ve grown so much as a team. We’ve become closer as teammates.

“They beat us the first time, but we got ’em back.”

Redders put the big picture of the Orioles’ season into focus.

“It is what it is,” he said. “You have to put your best foot forward come playoff time. But I’m proud of our kids. They did some great stuff this season. We had a great group of seniors . I coached a lot of them back in youth football. It’s been great seeing them come through the whole program and become great players. We have three going on to play Division-I sports — one for baseball and two for football. They’ve given us so many great memories.

“We’ll be back. We’ve got a great bunch of kids. We had people believing in us. We’ve never been a one-and-done team; it’s always been Level 2 or 3 and last year we reached the semifinals.

“We’ve got a great youth program, and our hope is to be a contender every year. We were conference champs this year and in 2019. We’ll just keep building and doing what we’re doing.”

Meanwhile, the Highlanders will look to take a step closer to returning to Madison when they take on Kaukauna (7-4). The Galloping Ghosts bolted out to a 31-10 halftime lead Friday at Slinger on the way to a 45-24 victory. Running back Noah Hofmann rushed for 307 yards and five touchdowns in the win.