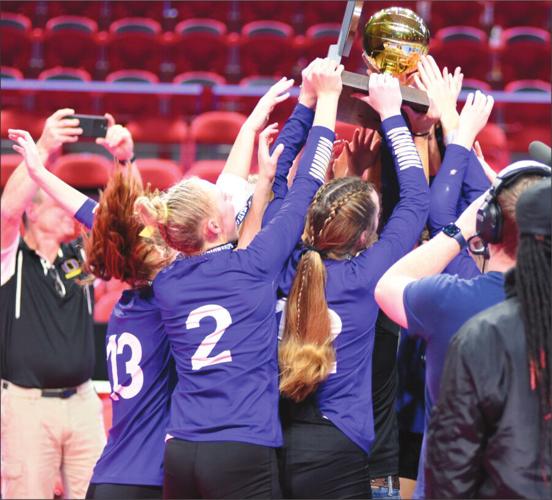 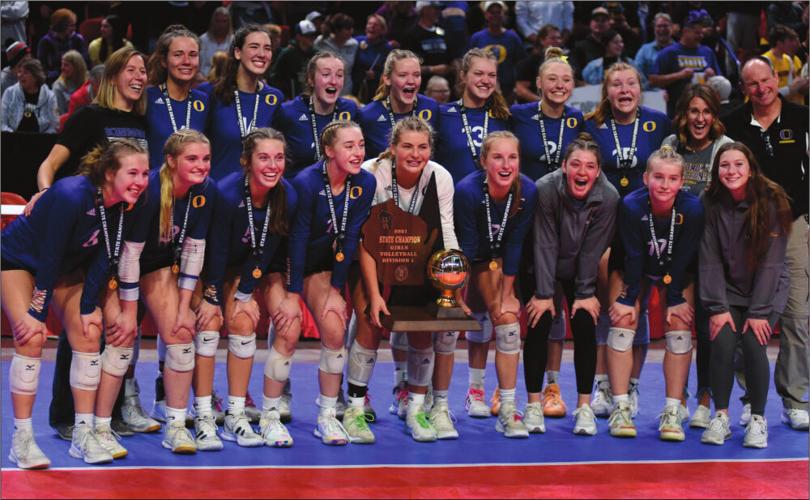 The Oconomowoc girls volleyball team celebrates its first WIAA state championship last season at the Resch Center in Green Bay. The Raccoons will enter the 2022 tourney as the top-ranked and top-seeded team in the Division-1 field.

The Oconomowoc girls volleyball team celebrates its first WIAA state championship last season at the Resch Center in Green Bay. The Raccoons will enter the 2022 tourney as the top-ranked and top-seeded team in the Division-1 field.

WAUKESHA — The reigning Division-1 champs are back in Green Bay.

Back and better than ever. That’s not hyperbole. An Oconomowoc team that lost just one set in the playoffs en route to its first state title in program history last season is even scarier one year later. That’s bad news for the other seven teams in the field at the WIAA State Girls Volleyball Tournament, set to take place today through Saturday at the Resch Center.

To no one’s surprise, the Raccoons (36-1) were awarded the No. 1 seed for the second straight year. It’s their sixth appearance at state in all, with each trip coming since 2015.

“This group thrives on its success,” Ocon coach Michelle Bruss said. “They’ve worked hard for it and they know they deserve it. That’s really cool to see.”

Once again winners of the Classic 8 Conference, Oconomowoc’s lone defeat came to the second-seeded team in the D1 field, DSHA (40-6), in the finals of The Joust. Since then, the Raccoons have basically been unstoppable, reeling off 30 consecutive victories and only dropping three sets along the way.

“I’ve been asked how we handle the pressure of the long winning streak,” Bruss said. “Having girls who’ve done it before really helped the others. They had nerves like that at one time, too, so that’s been huge.”

Ocon features just two seniors on its roster, and only one sees consistent playing time. That would be 6-foot-1 outside hitter Cordelia Kearns, the program’s all-time leader in kills. The Florida Tech commit was all-state honorable mention last season and set that new mark on Saturday in the Raccoons’ sweep of Manitowoc Lincoln. She’s up to a team-high 355 kills on the year on a .305 hitting percentage.

Making her third visit to the Resch Center, Kearns knows exactly what kind of mindset she needs to take out onto the floor as she looks to close her high school career with a bang.

“Some teams just go out there and play horribly because their nerves are so messed up,” Kearns said. “When you go out there calm and collected, it makes such a difference on the court. Everyone can tell, and it’s so spectacular.”

The Raccoons couldn’t have looked like they were having more fun when they swept Appleton North in last year’s championship match. That’s a potential final in this year’s iteration of the state tournament, as the Lightning (32-4) are the No. 3 seed and face another program that’s gotten used to making the trip north on I-41 — sixth-seeded Kettle Moraine (23-10) — in the quarterfinals Thursday.

“They’re primarily outside heavy but extremely good at it,” said KM coach Shane Peterson, who led the Lasers to their third state berth in four years. “They have very smart hitters that will find an open court. If you think they’re only going to hit cross or only hit line and don’t adjust defensively to them, you’re going to pay the price, and so that’s what we’re trying to get ready for.”

Junior outside Ella Demetrician leads Appleton North with 356 kills and is hitting .361, while senior outside Karissa Fortune has amassed 295 putaways in the Lightning’s 6-2 offense. But the Lightning graduated a pair of all-state performers and lost another to transfer.

“At the same time we have to know they have very good middles as well that we have to be cognizant of,” Peterson said. “They’re all hitting .350 and up, so they’re not making a lot of errors. It’s going to be tough competition but I believe we’re ready.”

He has a right to feel that way with Grace Grocholski on his side.

The all-state senior outside has a team-high 326 kills with a .326 hitting percentage. She’s supported by junior outside/right sides Briana Binagi (182 kills) and Abby Bauer (146 kills), while senior middle Myla Glaser is also over 100 kills this season.

“This year having two new setters, I think she has really stepped up her game which doesn’t surprise me from Grace,” Peterson said. “But it doesn’t have to be a perfect set. Just give me this and then I’ll take care of the rest. She has made smarter decisions in that regard.”

“We said before the year, our goal would be by the end of September we’d be hitting our stride,” Peterson said. “That Illinois tournament is right when we hit that stride in terms of finding that right mix, bringing our setters up in a new system and playing at a high level. Now they’re leading our team and it’s not just, ‘Tell me what to do.’ The rest of the team is following them. That wouldn’t have happened if not for the amazing leadership of our senior captains.”

One of those seniors is returning honorable mention all-state libero Kyleigh Coghlan. The Lasers have fallen to state-qualifiers DSHA, Oconomowoc and Burlington this season, but went 7-1 in the challenging Classic 8 and know what it takes to win in Green Bay — they took a five-set quarterfinal last fall over the Demons (37-4), who are a state mainstay and have the four seed this time around. They’ll play fifth-seeded Chippewa Falls (41-2), with the winner of that match taking on either Ocon or No. 8-seeded Wauwatosa East (22-17). The Dashers get seventh-seeded Middleton (27-2) in their quarterfinal bout on the other side of the bracket.

Of course, KM has been eliminated from state by the Raccoons in each of their last two appearances and was swept twice by their conference foes.

“We had a great competition,” Peterson said. “All three sets were very close, the last being 30-28, and so the girls have really just taken on a whole new attitude and way of looking at things. We’re going to give it our all and compete against them and there’s nothing that’s going to make us afraid.”

Bruss again has an embarrassment of riches at her disposal despite also graduating two first team all-state contributors in Haley Koch and Hadley Strohkirch.

Junior middle Anna Bjork, a Notre Dame recruit, has 201 kills on .335 hitting. Also over 100 kills are freshman outside Marlee Sivak and junior outside Olivia Kwiatkowski, as the Raccoons just continue to reload.

“I’m so excited,” Bjork said. “I feel like our team is more than ready to go. We’ve worked so hard every single day in practice. I’m so excited to see how we do.”

Running the show once again is 6-foot junior setter Lilly Wagner. She’s distributed 858 assists and put down 81 kills. Both Bjork and Wagner were second-team all-state picks as sophomores and are participating in the elite United States Olympic Development Program.

“We have such great trust in each other,” Bjork said. “We know that one mistake doesn’t really matter. We just shake it off and move on. If somebody does make a mistake, everyone has her back. That’s what’s helped us continue to win.”

They’ll be heavy favorites against the Red Raiders today and understand there’s some added pressure defending a state title. But it takes more than a single gold ball to be considered a dynasty, and Oconomowoc could very well be in the midst of one.

The Raccoons are taking it all in stride.

“At the end of the day, we’re just playing the game we love,” Bjork said. “It doesn’t matter who’s watching. It’s the same game in the Ocon gym as it is in the Resch Center. We just have to focus on the game and drown out the noise and we’ll be fine.”

Where: Resch Center, Green Bay Cost: $11 per session at the gate or $13 online