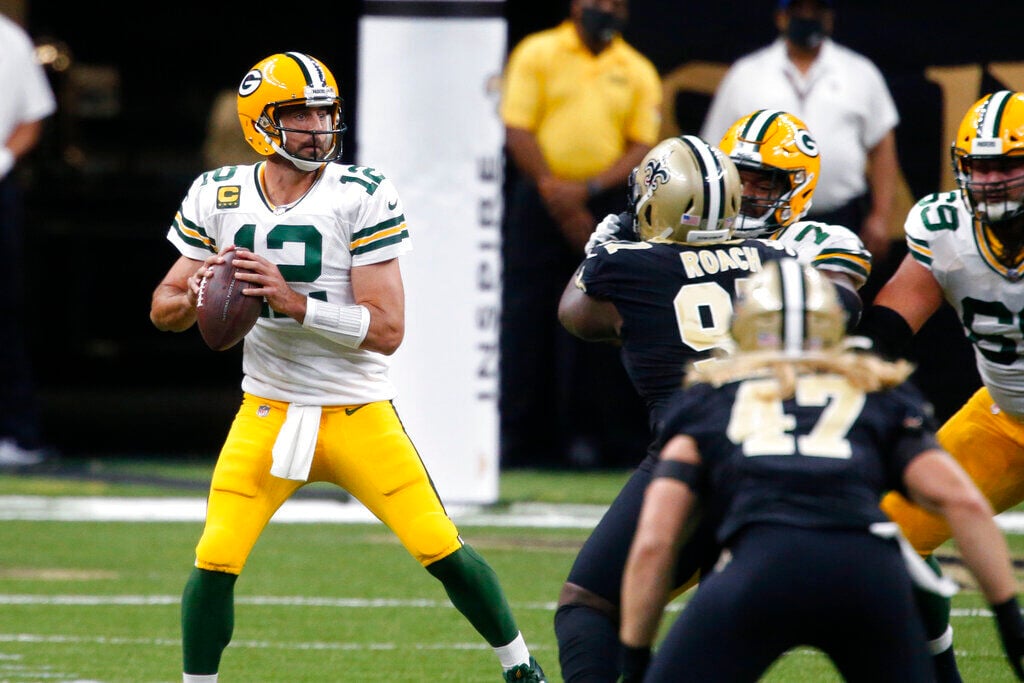 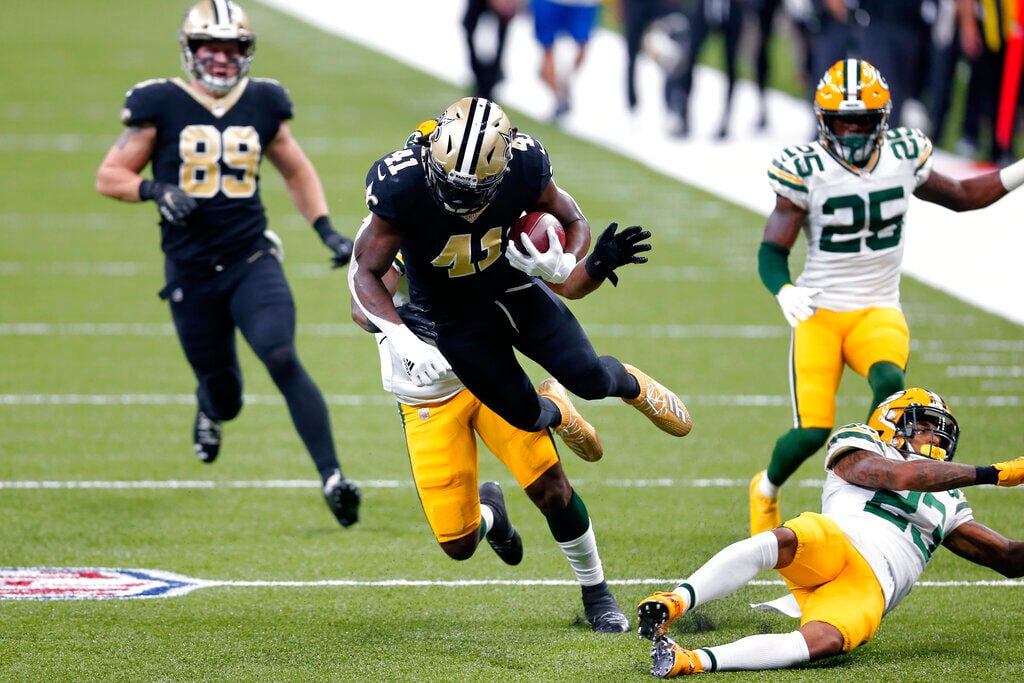 New Orleans Saints running back Alvin Kamara (41) is tackled by Green Bay Packers strong safety Adrian Amos on a 49 yard run in the first half of an NFL football game against the Green Bay Packers in New Orleans, Sunday, Sept. 27, 2020. (AP Photo/Brett Duke) 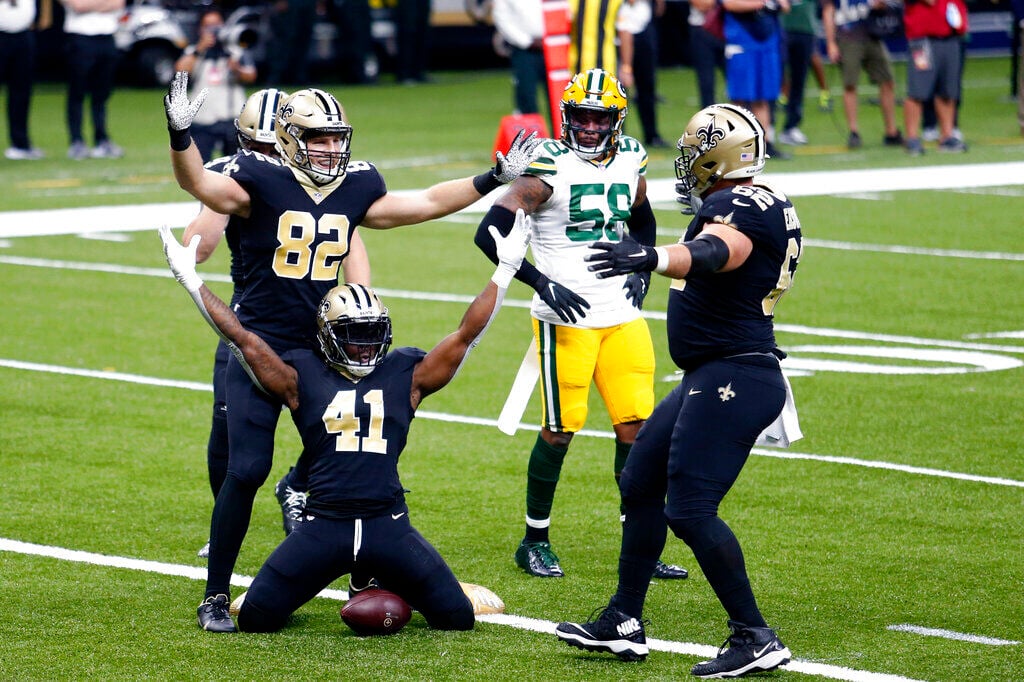 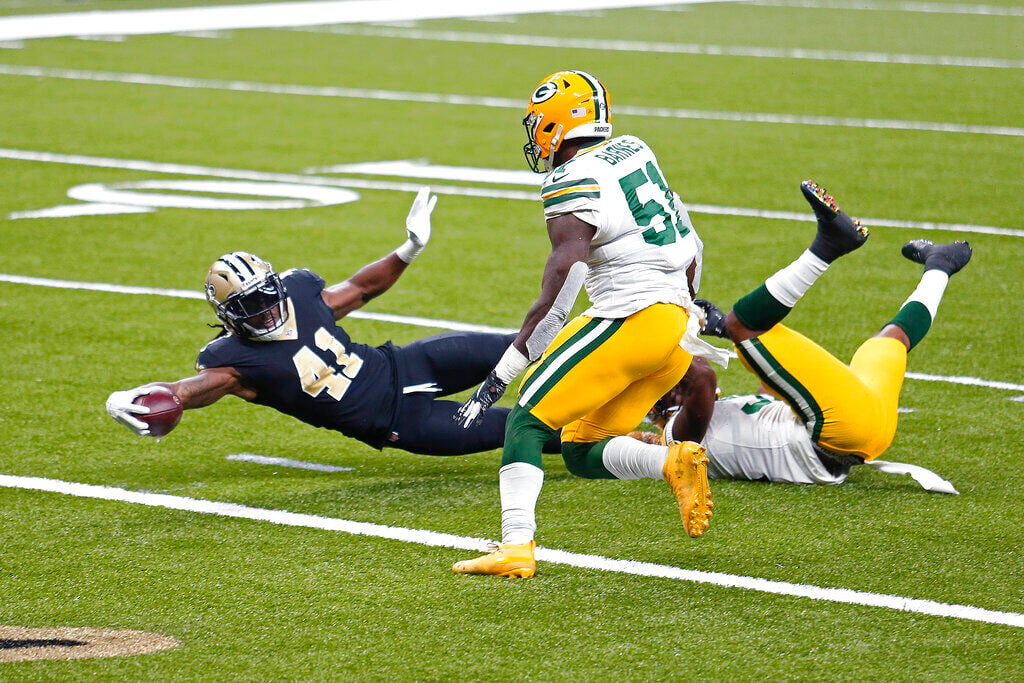 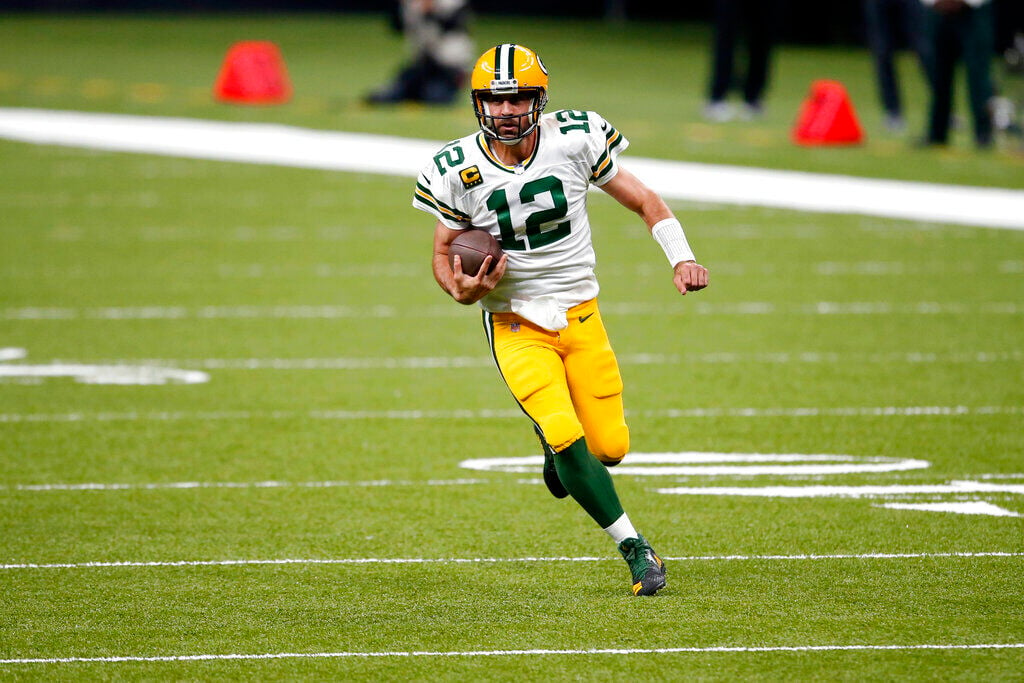 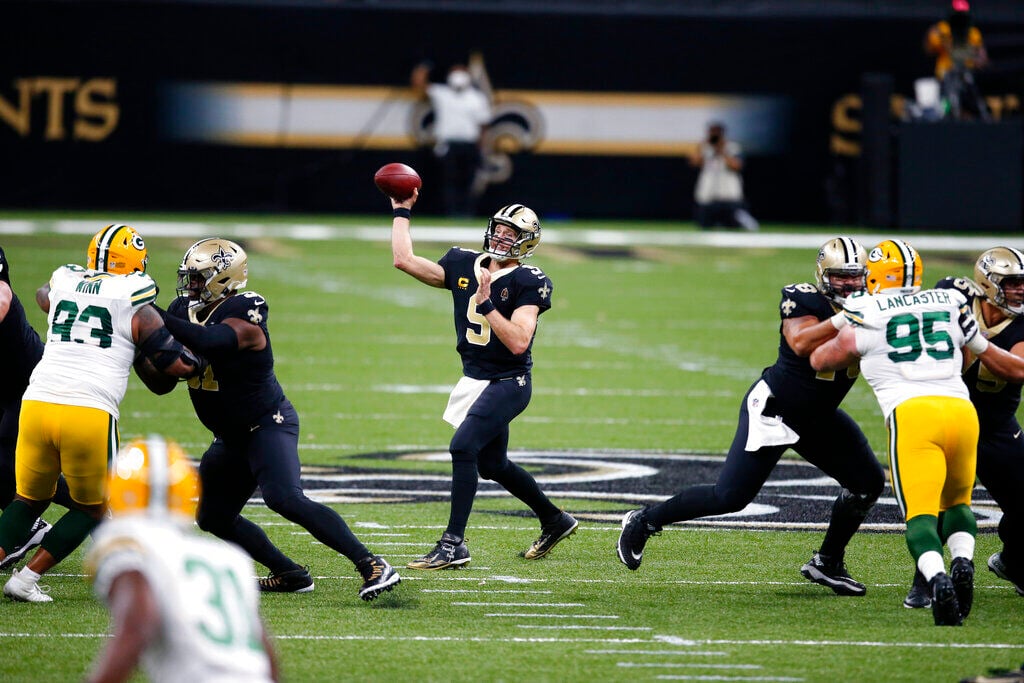 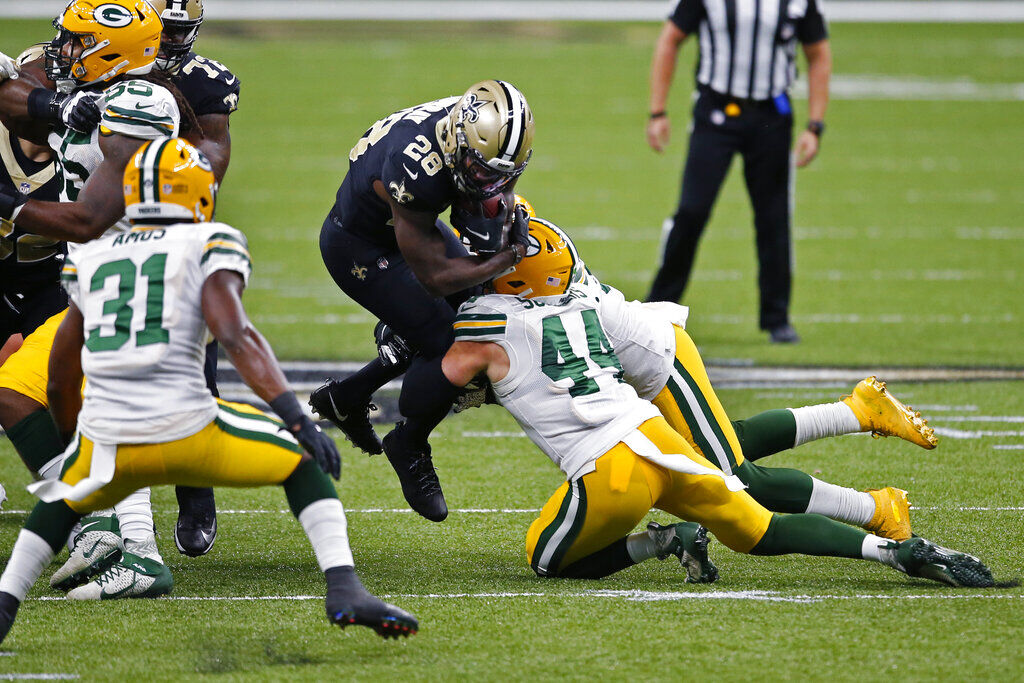 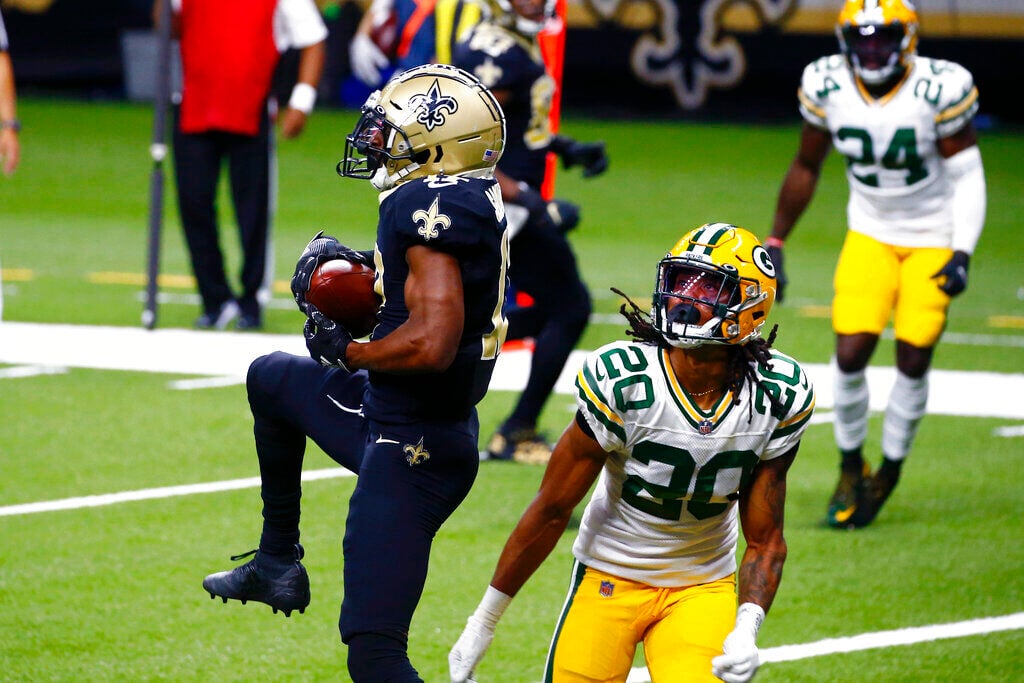 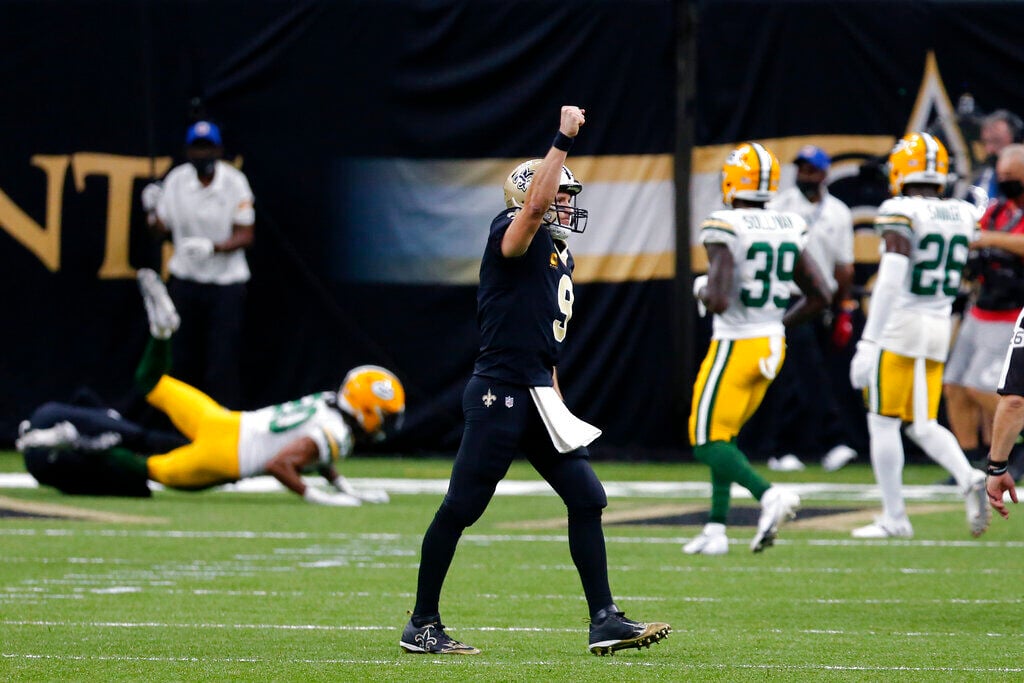 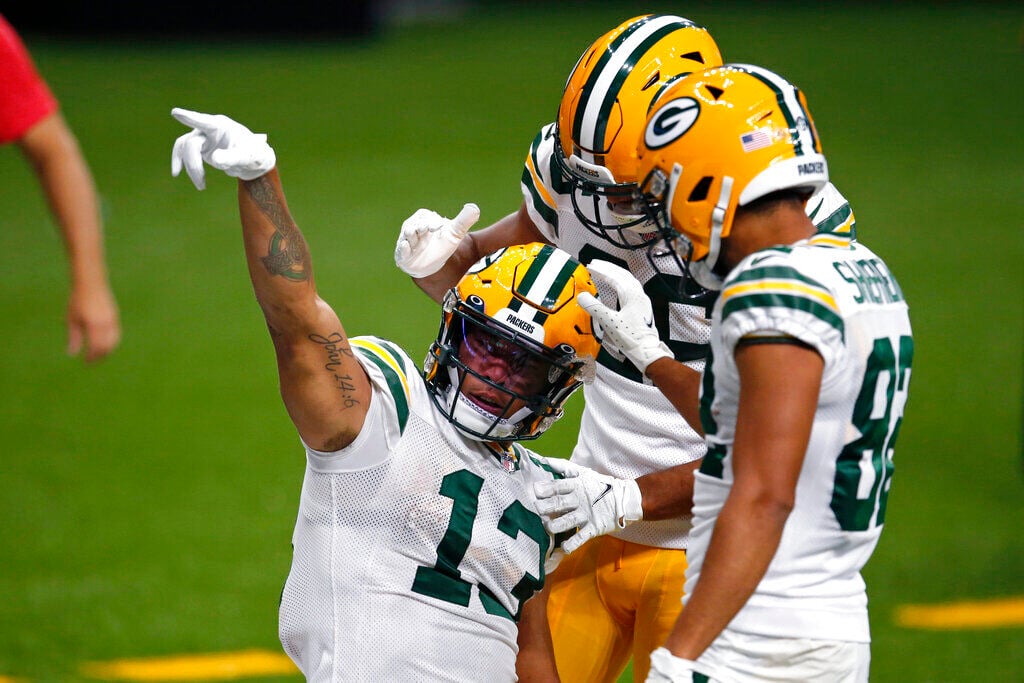 Green Bay Packers wide receiver Allen Lazard (13) reacts after a 72 year pass completion setting up a touchdown in the second half of an NFL football game against the New Orleans Saints in New Orleans, Sunday, Sept. 27, 2020. (AP Photo/Butch Dill) 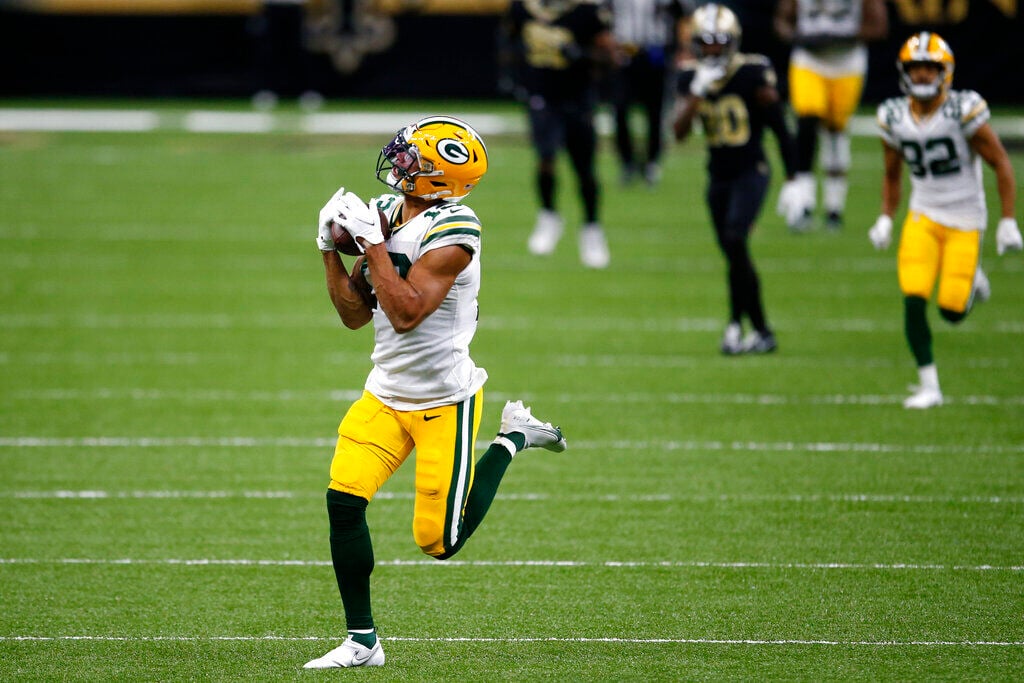 New Orleans Saints running back Alvin Kamara (41) is tackled by Green Bay Packers strong safety Adrian Amos on a 49 yard run in the first half of an NFL football game against the Green Bay Packers in New Orleans, Sunday, Sept. 27, 2020. (AP Photo/Brett Duke)

Green Bay Packers wide receiver Allen Lazard (13) reacts after a 72 year pass completion setting up a touchdown in the second half of an NFL football game against the New Orleans Saints in New Orleans, Sunday, Sept. 27, 2020. (AP Photo/Butch Dill)

The Packers are unbeaten and putting up some of the best offensive numbers in the NFL. So why not?

Rodgers passed for 283 yards and three touchdowns, and the Packers scored 10 points in the final nine minutes to pull out a 37-30 victory over the New Orleans Saints on Sunday night.

“We’ve gotten in a good flow," Rodgers said. "I feel so much more comfortable in the offense this year, and I think Matt has really settled in to the rhythm of the play calling, and it’s made my job a lot easier.”

With Packers top receiver Davante Adams unable to play because of a hamstring injury, Rodgers nonetheless found ways to attack New Orleans (1-2) with a variety of passes, short and long.

Allen Lazard caught six passes for 146 yards for Green Bay (3-0), including gains of 48 and 72 yards on throws deep downfield that each set up touchdowns.

“We have the best deep ball thrower in the league if not NFL history,” Lazard said. “To be able to go out there and connect on those plays I think is huge. It’s demoralizing for the defense.”

“I really like the timing on certain calls,” Rodgers said. “Sometimes, you’ve got to kind of dig deep at certain times and hold on to something and trust the players. I really appreciate the flow that we had tonight and the trust in us to make the plays.”

The decisive drive got going when Rodgers hit tight end Jace Sternberger for a 23-yard gain and later drew a pass interference calls in the end zone on a third-down play, which set up the Tonyan TD with two minutes left.

Saints running back Alvin Kamara built on a sensational start to the season, gaining 197 yards from scrimmage and scoring twice on short passes from Drew Brees, with shifty, tackle-slipping runs after the catch.

“It’s nice when you’ve got a weapon like that, that you just get the ball in his hands in space and he's tough to tackle,” Brees said. "It's like a human highlight reel.”

Kamara's scoring plays included a 52-yarder in which he took a pass near the line of scrimmage and broke four tackles, including one that forced him to balance along the sideline before he cut back inside for the final yards. That play, which tied the score at 27, might have wound a typical Superdome crowd into a wild, stadium-vibrating frenzy. But the stands were virtually empty, with the exception of fewer than 1,000 Saints player and staff guests.

Brees completed 29 of 36 passes for 288 yards and three TDs. Emmanuel Sanders caught a 10-yard scoring pass at the end of the first half that gave the Saints a 17-13 lead.

Green Bay nearly scored 40 in New Orleans after eclipsing that mark in each of its first two games, with 43 against Minnesota and 42 against Detroit.

“A big reason why we’ve been able to generate points is, No. 1, we do a great job of taking care of the football,” LaFleur said. “Our quarterback is as good as anybody, ever, at just making great decisions, throwing with great accuracy and timing. I think our offensive line has done a great job.”

The game featured a quick sequence of defensive highlights while the game was tied at 27 early in the fourth quarter.

The Packers parlayed the turnover into a go-ahead, 49-yard field goal by Mason Crosby with 8:47 to play.

Wil Lutz' third field goal of the game in the final minute allowed the Saints to set up an onside kick in hopes of recovering and driving for a tying touchdown, but the kick went out of bounds and the Packers were able to run out the clock.

Packers: LB Christian Kirksey injured his shoulder during the second quarter and did not return.

Saints: LG Andrus Peat was carted off the field after Kamara was tackled into the offensive lineman's lower legs late in the second quarter. The Saints said Peat injured his ankle.

Packers: Host Atlanta in a Monday night game on Oct. 5.