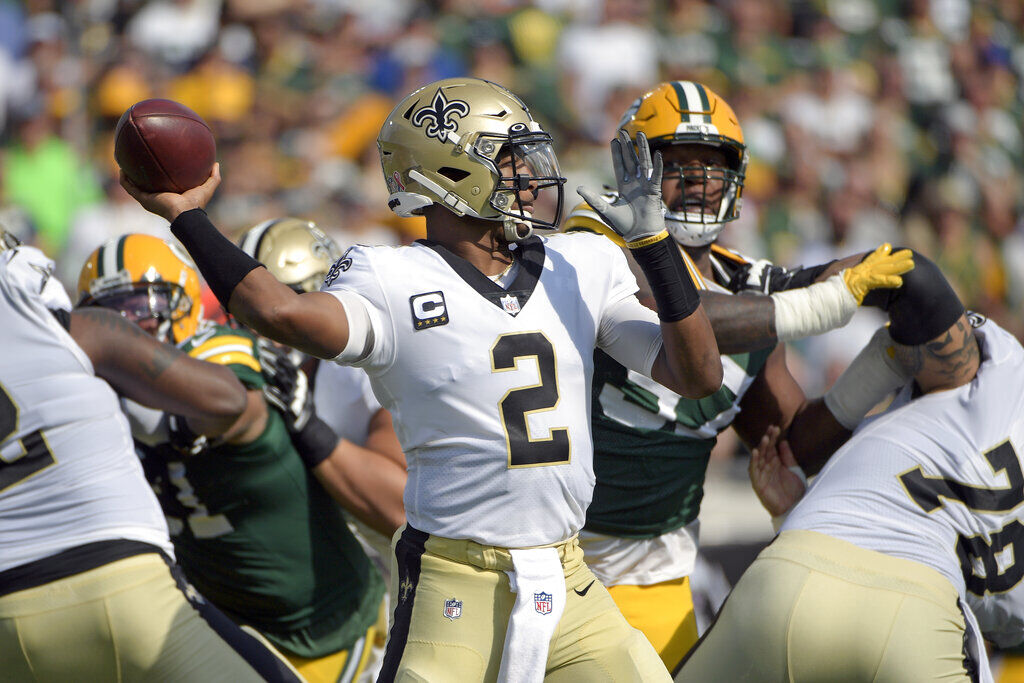 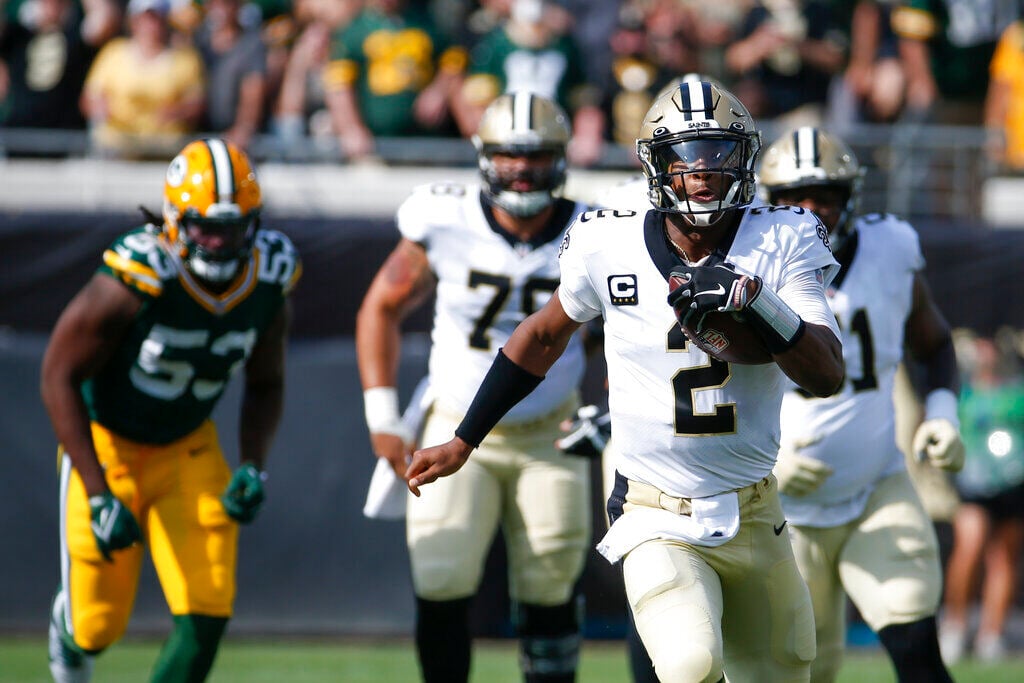 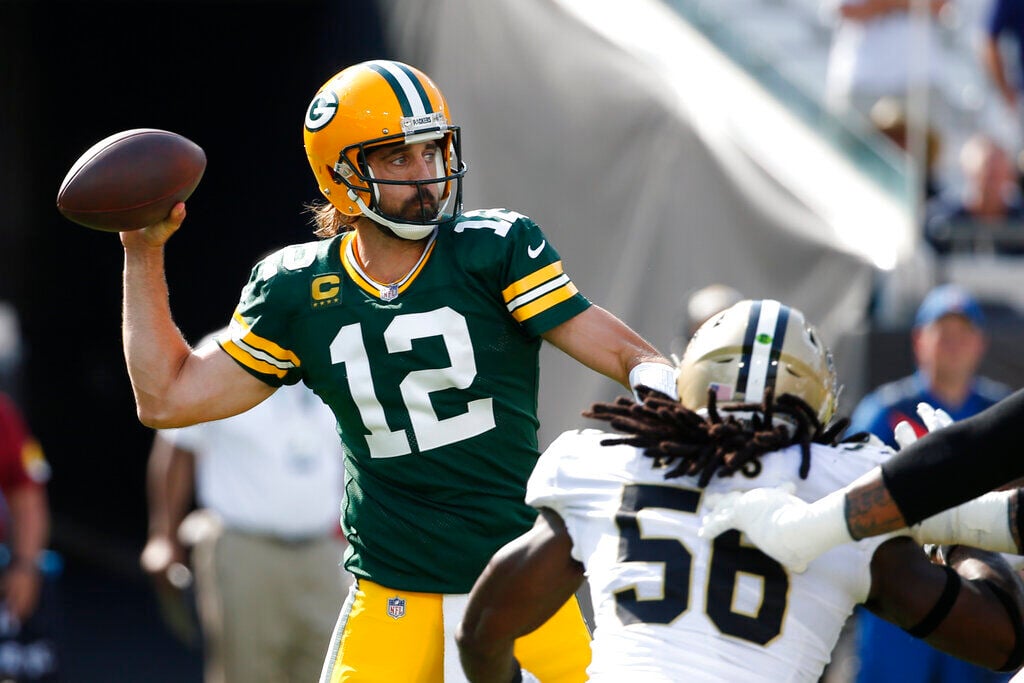 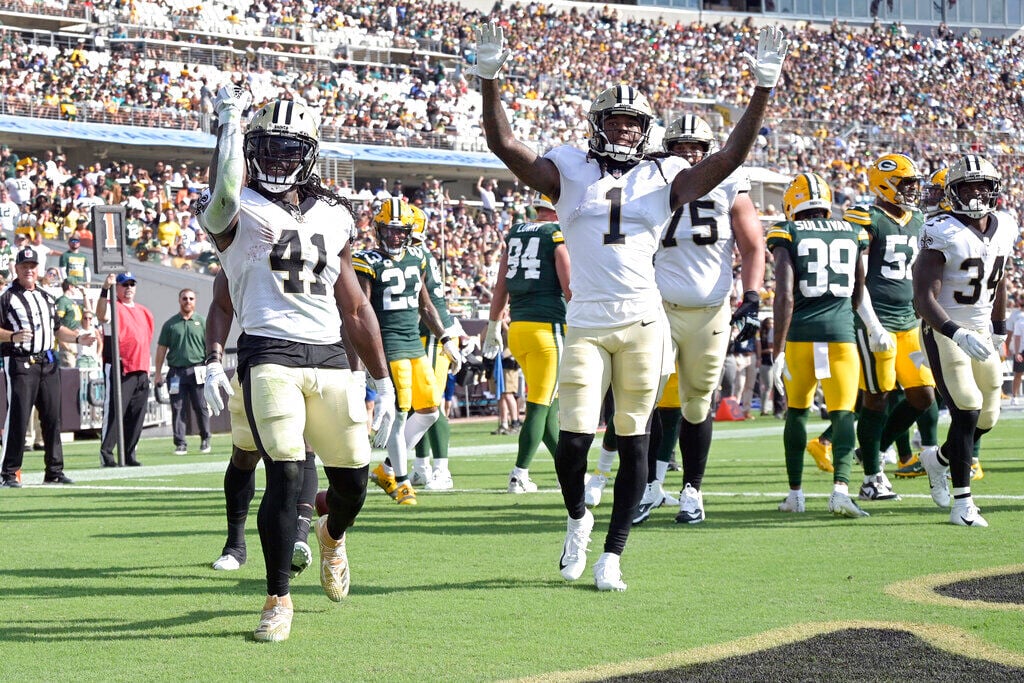 New Orleans Saints running back Alvin Kamara (41) celelbrates his touchdown against the Green Bay Packers with teammates including wide receiver Marquez Callaway (1) during the first half of an NFL football game, Sunday, Sept. 12, 2021, in Jacksonville, Fla. (AP Photo/Phelan M. Ebenhack) 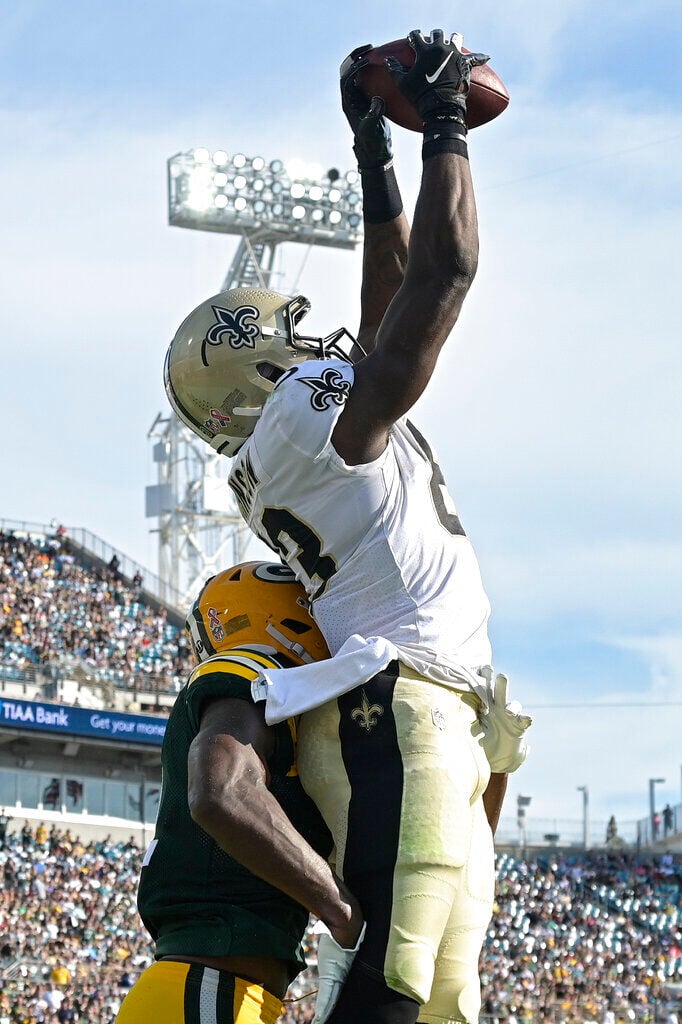 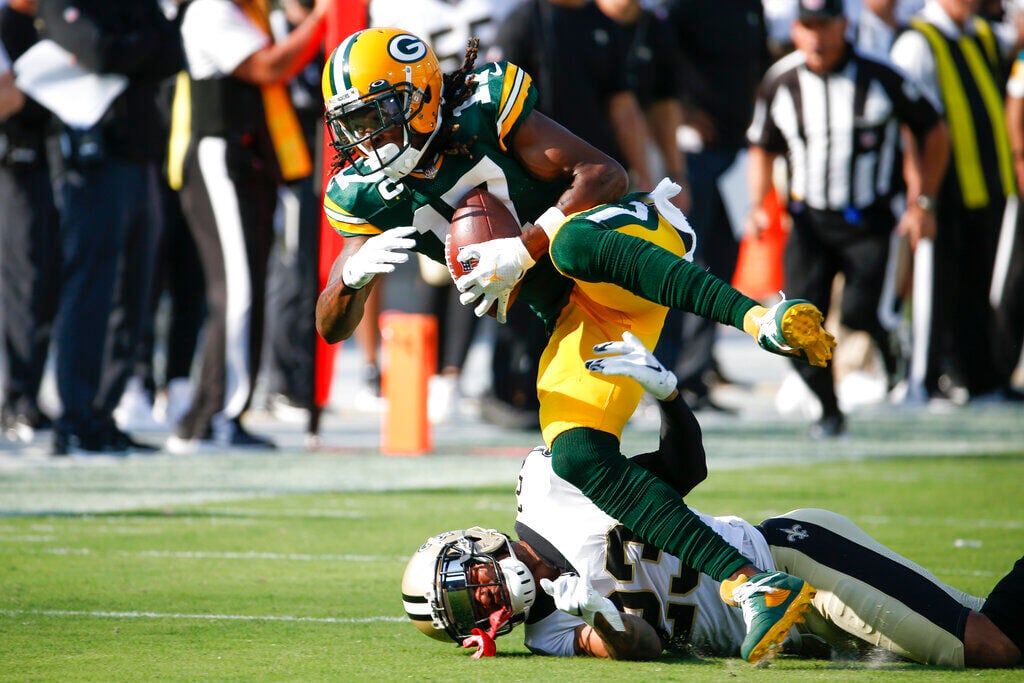 New Orleans Saints running back Alvin Kamara (41) celelbrates his touchdown against the Green Bay Packers with teammates including wide receiver Marquez Callaway (1) during the first half of an NFL football game, Sunday, Sept. 12, 2021, in Jacksonville, Fla. (AP Photo/Phelan M. Ebenhack)

JACKSONVILLE, Fla. — Jameis Winston and the hurricane-displaced Saints looked right at home in northeast Florida — no doubt to the delight of fans rebuilding homes and lives back in New Orleans.

“We knew that even though some people don’t have power, they’re going to find a way to watch the Saints,” linebacker and captain Demario Davis said. "That’s just what this team means to the city — and the city means the same to us."

The game, originally scheduled for the Superdome, was moved while the New Orleans area continues to clean up wreckage left by Hurricane Ida, which struck southeast Louisiana as a Category 4 storm on Aug. 29, 16 years to the day after Hurricane Katrina devastated the same region.

After canceling their final preseason game and practicing two weeks in the Dallas area, the Saints looked as sharp and inspired as any club with such distractions could have hoped.

“That was for the city,” Winston said. “We did that for them. We knew how much it would mean to get a great victory for that region. They’ve been through so much. ... Hats off to them for their resilience, because they motivated us. They inspired us to come out there and ball.”

Winston, who led the NFL with 30 interceptions in his last season as a starter with Tampa Bay in 2019, was largely judicious and accurate in going an efficient 14 of 20 for 148 yards without an interception. New Orleans also rushed for 171 yards.

Winston didn't take a sack, but did take off and run for a few key third-down conversions in the first half.

The only risky throw that backfired on him — a deflected pass caught by Packers defensive back Darnell Savage in the end zone — was negated by a contested roughing-the-passer penalty called against edge rusher Z'Darius Smith.

The penalty set up the second touchdown catch of the game by Juwan Johnson, who came in with four career catches and was converted from receiver to a tight end this offseason.

On the day before his 25th birthday, Johnson also converted a screen pass into a 12-yard, first-down gain on fourth-and-7 in the second quarter, when the game was still in doubt. He capped that drive with a leaping catch in the end zone on fourth-and-2. The two fourth-down conversions highlighted a pivotal 14-play drive that consumed 10 minutes.

“You've got to pick your spots where you want to be aggressive and it's a little bit easier on that end of the field,” Payton said. “I felt pretty good about the calls.”

Green Bay fans seemed to outnumber Saints fans in a crowd announced at 35,242 for what was officially a Saints home game. But they left disappointed in a day that could not have gone much worse for Rodgers, who was pulled with nearly 11 minutes left.

As the time expired, the remaining Saints fans joined in triumphant chants of “Who Dat!” that echoed throughout the stadium.

“This is a good kick in the you-know-where,” said Rodgers, who finished 15 of 28 for 133 yards and no TDs. “We felt like we were going to go up and down the field on whoever they have and that obviously wasn’t the case.”

Opening the third quarter down 17-3, the Packers squandered a chance to trim their deficit when Rodgers' wobbly pass under pressure was intercepted by rookie defensive back Paulson Adebo at the New Orleans 7 early in the third quarter.

On Green Bay's next drive, Marcus Williams intercepted Rodgers' deep overthrow and returned it to the Packers 12, setting up Winston's 10-yard TD to Chris Hogan.

“Every team has a game like this,” said Packers running back Aaron Jones, who was limited to 9 yards on five carries. “It’s better to get it out now.”

The Saints did not punt in the first half.

New Orleans took the opening kickoff for a field goal and led 10-0 after Alvin Kamara took a short forward pitch from Winston as he crossed behind the offensive line, then slipped multiple tackle attempts to squirm into the end zone from 3 yards. That officially went down as Winston’s first regular-season TD pass as a Saint, and he helped set it up with a 10-yard scramble on third-and-8.

Packers tight end Josiah Deguara appeared to be knocked unconscious when he took a knee to the head from Saints end Marcus Davenport in the third quarter. He left with concussion symptoms. ... Savage left in the second half with a shoulder injury.

Packers: Host Detroit in a Monday night game on Sept. 20.

JACKSONVILLE, Fla. — Green Bay's Aaron Rodgers has rarely had an NFL performance like this.

It was nearly a new Sunshine State low for a quarterback with plenty of Florida woes.

The league’s reigning MVP completed 15 of 28 passes for 133 yards, with no touchdowns and two interceptions in a 38-3 drubbing to hurricane-displaced New Orleans on Sunday.

“This is a good kick in the you know where," said Rodgers, ready to turn to page to next Monday night's game against Detroit. "Hopefully gets us going in the right direction going back home and playing a division opponent next week.”

Rodgers spent the final 11 minutes of the game on the sideline, having given way to second-year pro Jordan Love. Rodgers mostly sat on the bench and chatted with teammates. There was plenty to break down, little of it positive.

“We played bad. I played bad. Not characteristic of how we’ve practiced in training camp. Obviously not how I’ve played over the years,” Rodgers said. "This is hopefully an outlier moving forward. We’ll find out next week.”

The Saints looked like geniuses for choosing to play in Florida, where Rodgers has been less than stellar over his 17-year NFL career. This one, though, made most of the others look decent.

“I think those are all great excuses for us that we will not even go near," said Packers coach Matt LaFleur.

LaFleur said it was fair to question whether he should have rested most of his starters during the preseason.

“Certainly I think you question every decision you make when you put a performance like that out there," he said.

Rodgers finished with a 36.8 passer rating, tied for his fourth worst in 191 starts. And it came against a defense supposedly thin in the secondary.

His biggest issue was Green Bay’s offensive line, which started two rookies and had another guy playing out of position because All-Pro left tackle David Bakhtiari is recovering from a knee injury. The revamped unit did little to open rushing lanes and even less to give Rodgers enough time in the pocket.

It didn't help that Green Bay punted on its first two possessions and trailed 17-0 before picking up its third first down. Rodgers went to two-minute mode from there, hardly ideal against New Orleans' two-deep shell scheme designed to get pressure with just the front four.

The Packers managed a field goal at the end of the half and moved into the red zone to open the third quarter — they were hoping to cut the lead to 17-10 — when Rodgers got hit as he threw and misfired behind Davante Adams. Paulson Adebo got the interception.

Rodgers called it the “play of the game.”

His second interception was a bad overthrow to speedster Marquez Valdes-Scantling. He completed just one pass longer than 20 yards, a perfectly placed ball to Adams that gained 31. That led to Green Bay’s lone score, a 39-yard field goal by Mason Crosby on the final play of the first half.

Nothing changed after the break. And Rodgers ended the day like few others in his illustrious career.

Rodgers fell to 3-5 in eight starts in Florida, including back-to-back losses.

The Saints, who spent two weeks practicing in the Dallas area after Hurricane Ida made landfall near New Orleans on Aug. 29, had their pick of any of Florida’s three NFL stadiums. They chose Jacksonville in an effort to make it tougher on Packers fans trying to get tickets, and partly because they didn’t want Tampa Bay fans cheering against a fellow NFC South team.

They also looked at Rodgers’ record in the Sunshine State, which wasn't good and just got worse.

“I always say there’s no coincidences in life, so I don’t think I can slough it off as a coincidence," Rodgers said. "We traveled down here. It was hot but not as hot as we played here in ’16. The heat shouldn’t have been an issue for us. We just didn’t execute very well.”