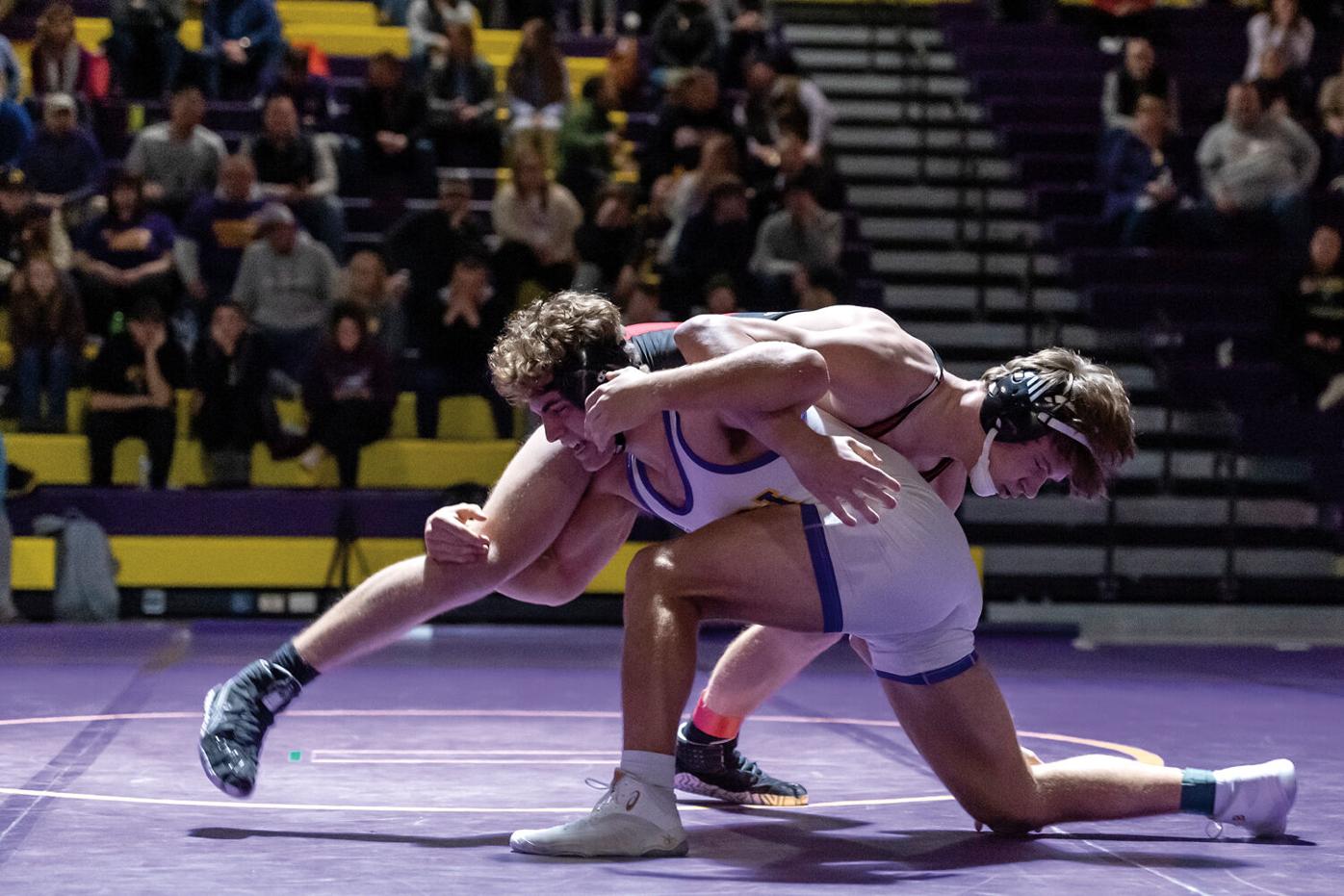 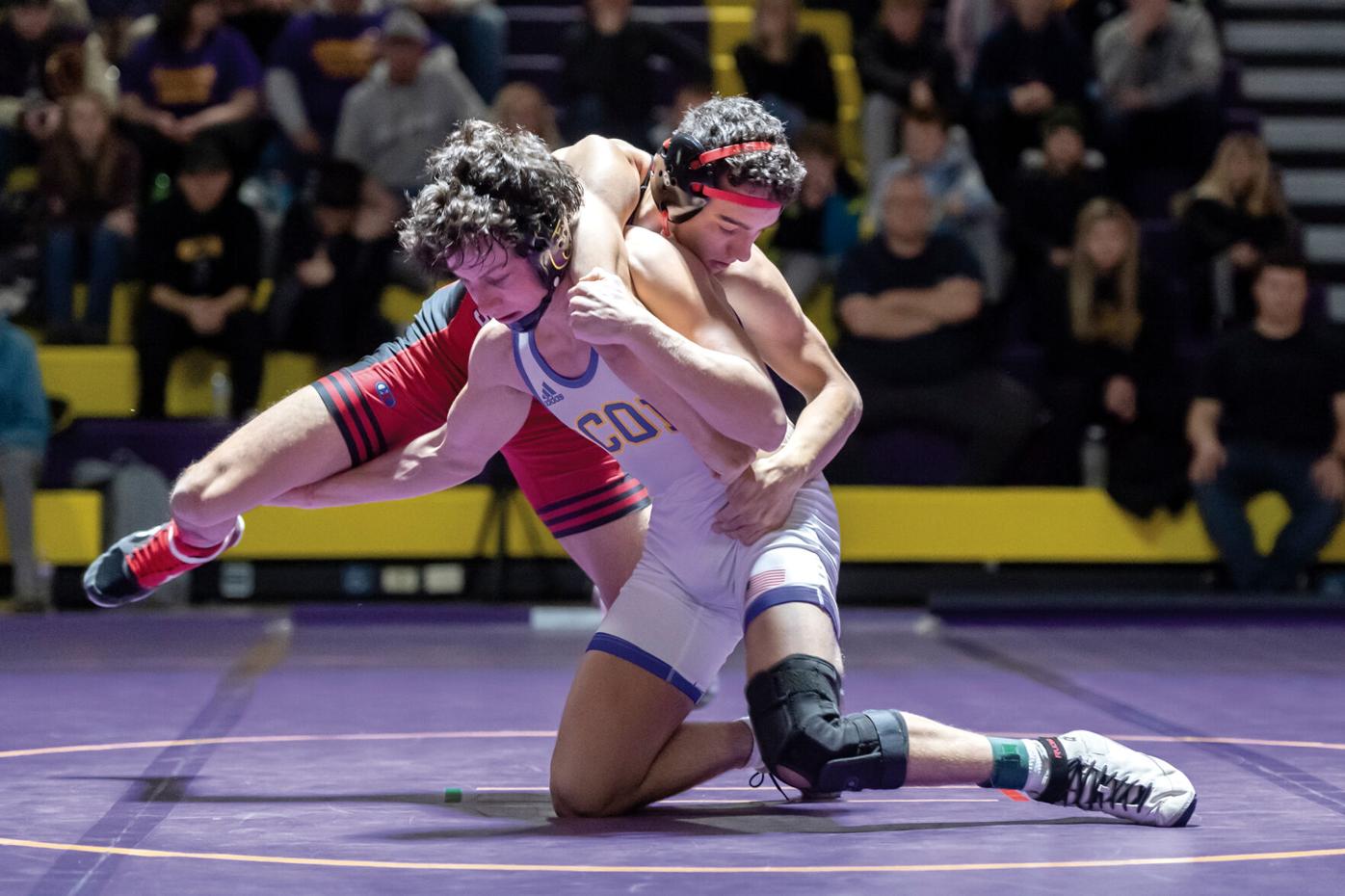 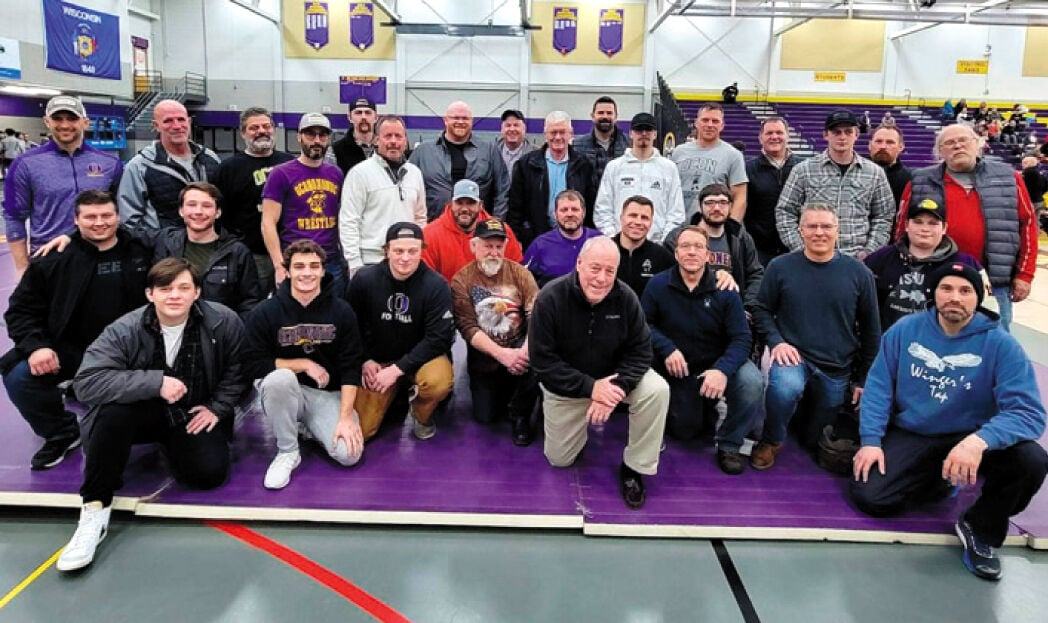 Oconomowoc High School wrestling alumni gather prior to the Raccoons’ Classic 8 Conference dual victory over Waukesha South on Thursday at the Gale Douglas Field House, named for one of the program’s Wisconsin Wrestling Coaches Association Hall of Famers.

Oconomowoc High School wrestling alumni gather prior to the Raccoons’ Classic 8 Conference dual victory over Waukesha South on Thursday at the Gale Douglas Field House, named for one of the program’s Wisconsin Wrestling Coaches Association Hall of Famers. 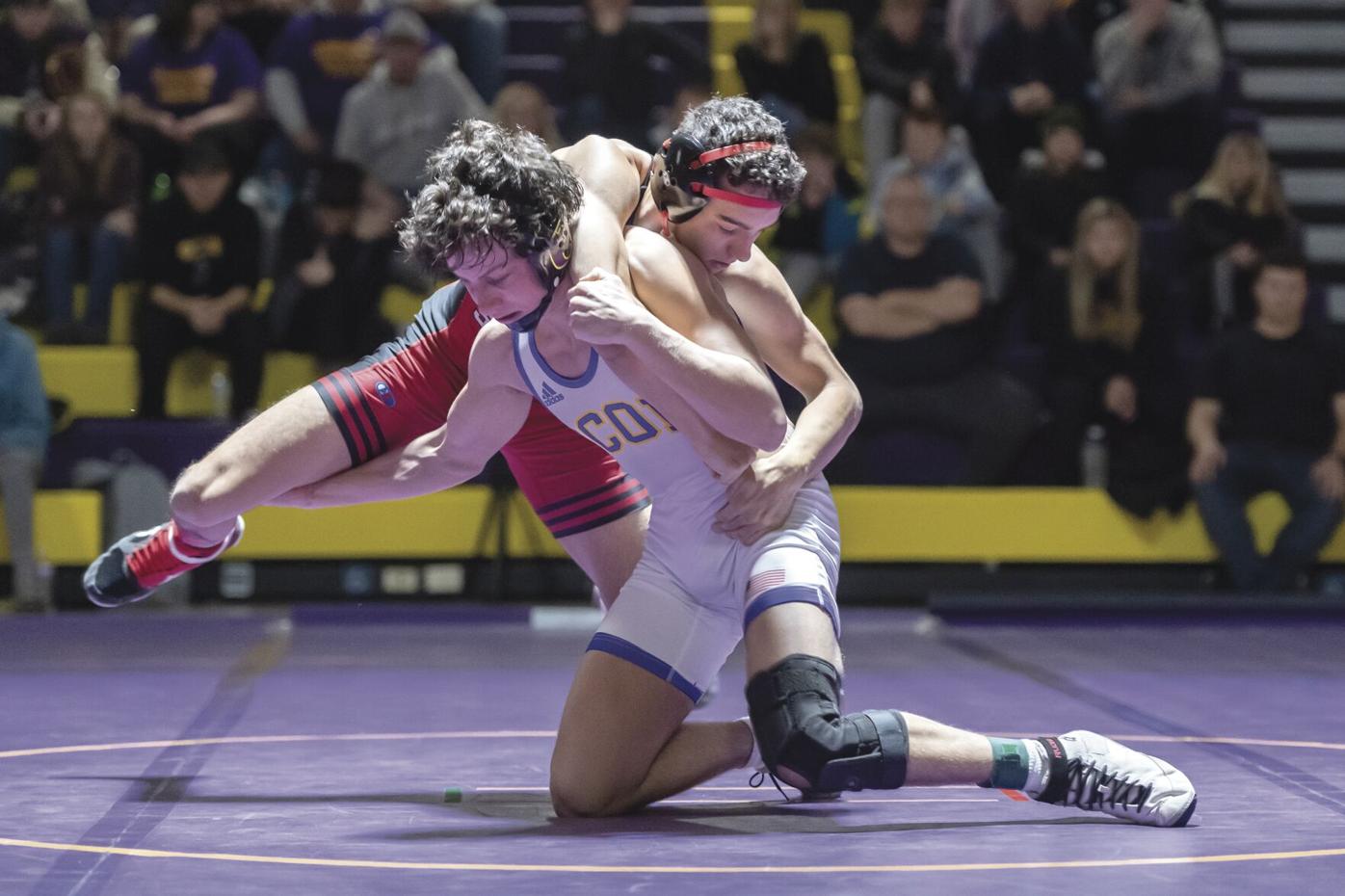 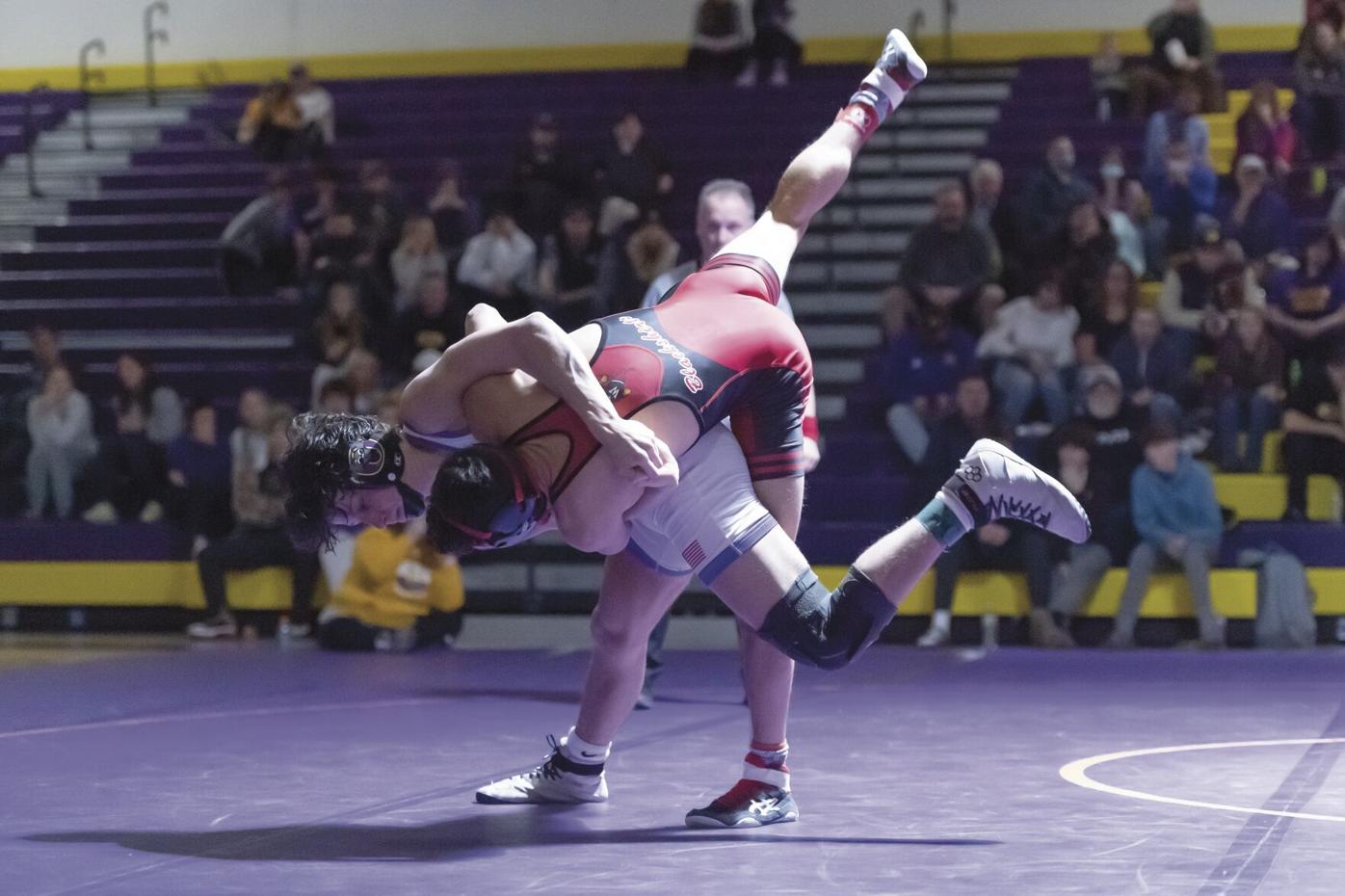 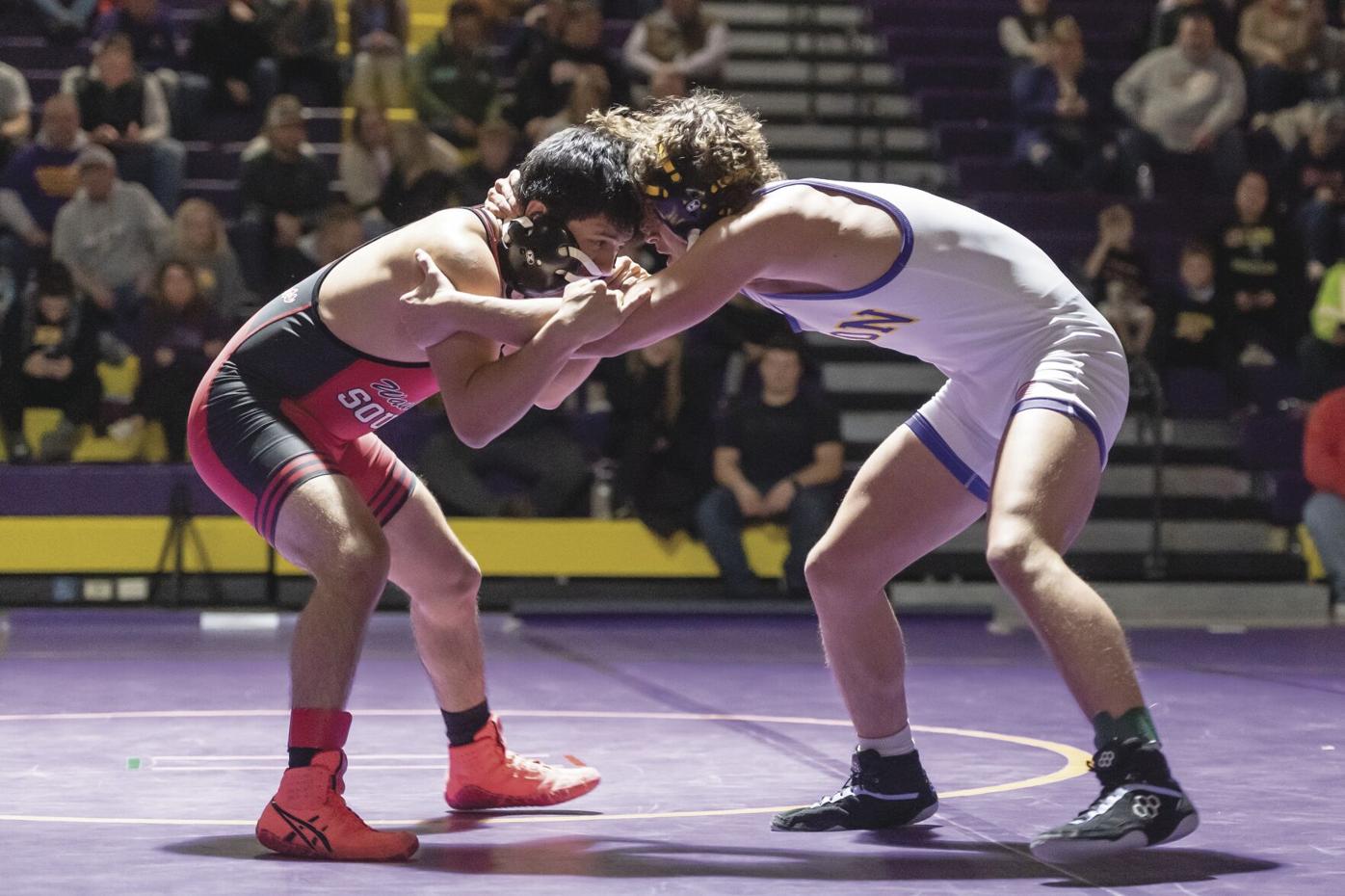 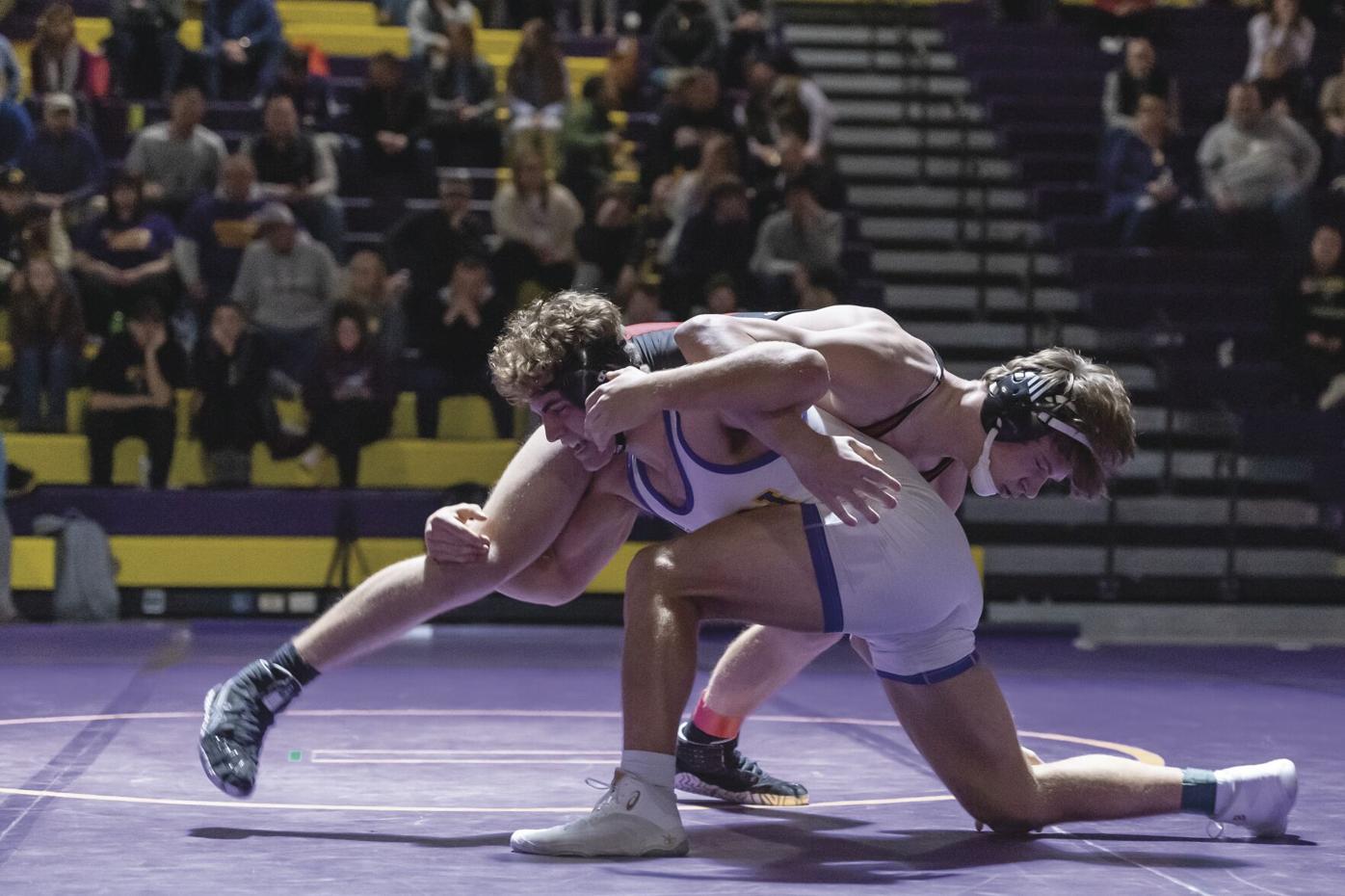 More than 30 men who wrestled for the Raccoons were introduced to the audience prior to a Classic 8 Conference dual meet against Waukesha South.

The current team members made it clear early that they weren’t about to let their predecessors down.

Ocon accepted forfeit victories in the first two matches, then proceeded to win the next seven — four via pin — on its way to a 55-24 victory to lift its Classic 8 dual ledger to 3-1.

“It was special to get our alumni in here,” Oconomowoc coach Ryan Woods said. “This was the first time since I’ve been here that we’ve had an Alumni Night. That was refreshing, and we honored two guys on Senior Night. Tyler Hanson has done a lot for our program and the entire athletic department at our school, and we also honored Ryley Farmer, our team manager.

“We were able to string some wins together early. There were a couple of matches I’d like to have back. We get into situations that the average fan in the stands doesn’t realize, but we see improvement on the mat based on what we’re doing in the (wrestling) room.”

“Knowing that we were starting four matches behind (due to forfeits), we just had to do what we could do with the team we had,” Fisher said. “We came back. To win four matches at the end by pin was just beautiful.”

Junior Josh Raduenz began a streak of three consecutive Oconomowoc falls with a 2:47 plant at 152. Junior Kaiden Bavuso leveled his 160 rival in 5:27 and junior Jacob Ducett stuck his 170 opponent in 3:43.

Bavuso and Ducett enjoyed the Alumni Night ceremony and wanted to make the grads proud.

“It was really cool to see,” Bavuso said. “I knew quite a few of them as coaches and former teammates. It was great to see everyone come back. Events like this are really cool because they bring our community together. It helps Oconomowoc as a whole in comparison with the other schools in the area.”

Ducett agreed. “I thought it was cool to see a lot of people who came before us,” he said. “I knew some of them — Chase LaFernier, Ryan Van Ells, Tyler Scully.

“It brings a great vibe and environment. It gets you fired up to see so many people who wrestled before you.”

Both Bavuso and Ducett felt some pressure when they took the mat with a winning streak at stake for their team.

“I think that pressure is really good because it helps you keep pushing through,” Bavuso said. “It helps you fight that extra step when you’re wrestling. I just tried to go out and be aggressive like we do in the room and practice what we practice.

“Going into the match, we felt pretty good, and we showed it right away.”

Ducett thrived under pressure, too.

“I feel like it (the pressure of the winning streak) helped, especially later in my match,” he said. “It lights that fire under you.

“I just tried to be aggressive and listen to what the coaches have been saying — ‘Be technical, be smart and don’t make mistakes.’” Oconomowoc freshman Sam Ganos posted a 9-1 major decision at 192 before senior Isaiah Banderas put Waukesha South on the board with a 1:48 pin at 195. Junior teammate Robert Savelkoul followed his act with a 3:41 fall at 220, and senior Matthew McNeil gave the Blackshirts a hat trick of pins with a 3:28 downing at 285.

Ocon freshmen Ibe Hamdan and Jayden Yauck accepted forfeitures at 106 and 113, respectively, before South junior Jimmy Wollenberg completed the dual with a 37-second pin at 120.

“For Isaiah to start it off at 195 with his pin was big,” Fisher said. “Robert, Jimmy and Matt getting pins was great. It was so good to end the meet the way we did. It leaves a good taste in your mouth.

“It’s going to send us powerfully into our Ken Heine Tournament this weekend. After that, we have duals against North and West. We want to prove that we’re the city champs. It was good for us to come out here and get some work done, but we also have some room for improvement.”

Oconomowoc hopes to sustain its momentum and its progress.

“I think our entire team, from top to bottom, is getting better — in a lot of situations and positions,” Woods said. “Some of the guys have room for improvement in some of those situations and others don’t.

“As a team, we’re trending along.”

“We’re getting to our peak conditioning phase, and that’s where we want to be for February,” Bavuso said.

“We just keep getting better,” Ducett said. “Everybody’s coming on with each match.”