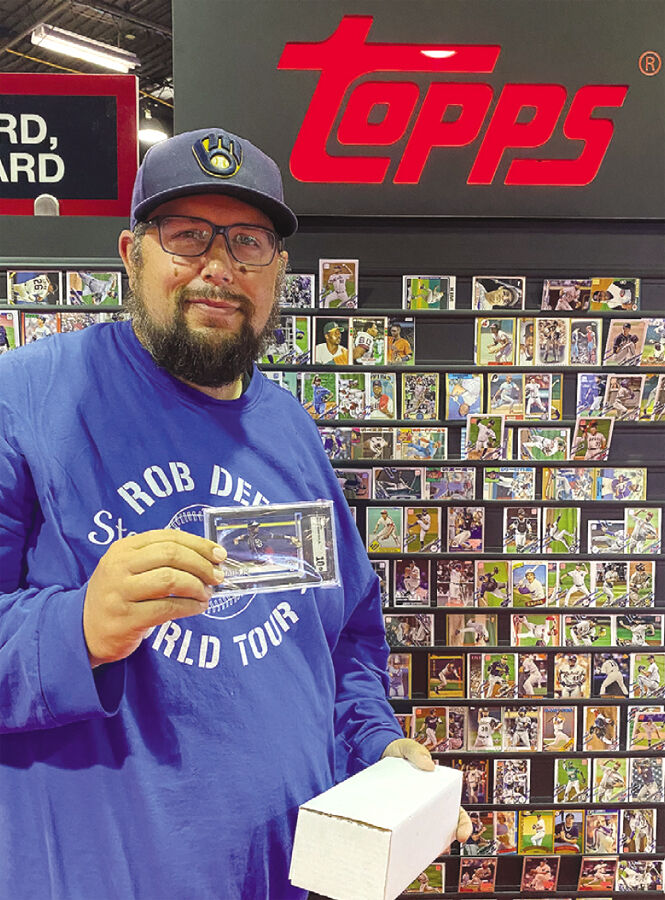 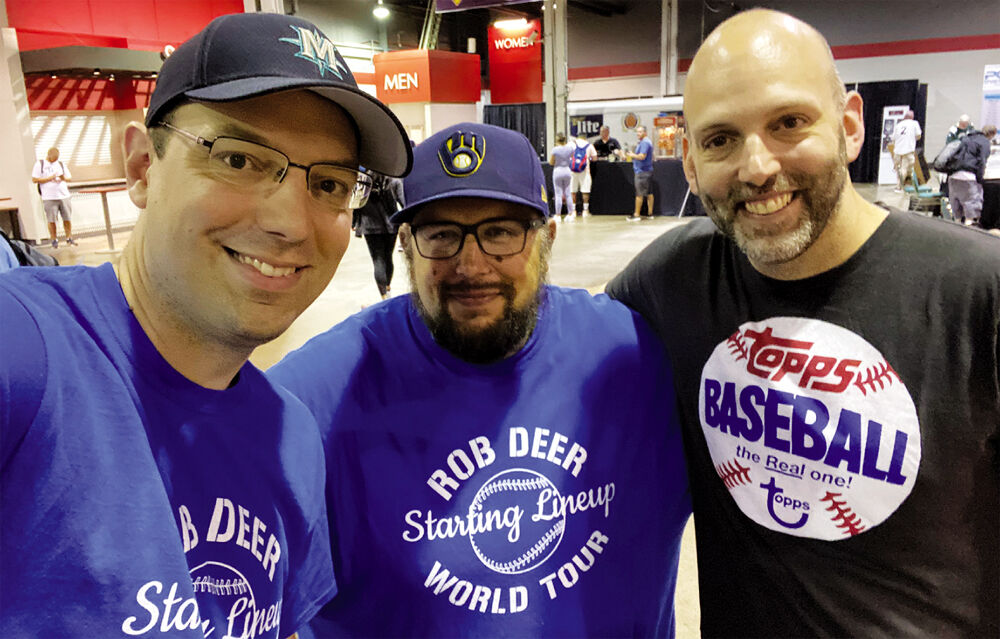 A few weeks back, I discussed that July was going to be a big month for sports cards and collectables shows in the region. The main event of that activity in the hobby, called the National Sports Collectors Convention, or National for short, took place late last week and carried through the weekend.

I attended the same show in 2019 and wrote a column at that time about my experience and what purchases I made during the convention in Rosemont, Ill. In the two years since, a lot of things have changed, including my interest in the hobby.

Two years ago, I went with the intention of looking around and reliving a hobby from my childhood. As luck would have it, when the pandemic hit, a lot of people took a big interest in sports cards and the market exploded.

My interest, primarily in baseball cards, has increased since that previous visit to the National, so I went this year with a much different mindset in comparison to 2019. Two years ago, it was to kind of rebuild some of the collection I assembled as a kid and upgrade a few of the cards I had from childhood that were in rough shape.

This time around, I went with several purposes in mind. The first was obviously to add some cards to my collection. The second was to get an autograph from one of the athletes that was making an appearance. Finally, I was looking forward to meeting some people from around the country in person that I have been corresponding with in recent months.

The first thing I did ahead of the National was to look online for some tips about how to have a successful convention. I also watched a few videos people made about how they were preparing for the event. While it was going to be easy for me to have fun spending several hours over multiple days checking out cards from a wide variety of sports at more than 650 dealer tables, the advice ranged from helpful to obvious to stuff that applied to the big spenders who are interested in cards I have never even heard about.

(As a quick side note, you would probably be shocked at how many people had display cases full of cards that were worth in excess of $10,000. Yes, that would be per card!) Two things that nearly everyone suggested were to have a strategy for how to attack the show floor and to have a plan for what you would like to look for and possibly purchase. I actually ignored both of those sound ideas, mainly because I wanted to see where the spirit took me as I weaved between tables and exhibits, from autographed cards of baseball prospects to vintage basketball cards to autographed photos of Mike Tyson. I didn’t want any part of the experience to feel like I was completing some type of checklist, where I would be more concerned about completing a task rather than browsing and seeing what I could find. The only schedule I kept was a few loose times for meeting up with people at the convention center and for getting an autograph that I had paid for. Other than that, I was there to soak in the experience.

I will start with a simple statement, but one that won’t be a surprise if you’ve read some of my previous columns on this subject. The crowds were massive — as in, record attendance for the 41st annual event.

While there were a lot of people, I can honestly say I rarely had to wait to check out a display case or dealer booth that caught my eye. That seems like a win-win, because it means the hobby is strong, but not yet overcrowded.

One growing trend — and it is something I was fully aware of well before heading down to the show — is the increasing interest people have in graded cards. To summarize that quickly, a card can be sent to a grading company, which judges the condition of the collectable, then places it in a protective plastic case. In theory, that helps eliminate the subjectivity in assessing what the shape the card is in, but it also has caused cards judged to be in pristine condition to skyrocket in value. My interest is generally in ungraded cards (known in the hobby as raw cards). To put in perspective how much things have changed, when I attended the National for the first time 20 years ago, I don’t believe there were any graded cards, or at least I don’t remember seeing any. As recently as 2019, I would guess that four out of every five cards in dealer display cases were ungraded. Over the weekend, I would guesstimate that three of every five cards I saw in a showcase were graded.

Allow me to share a few other brief observations:

■ It seemed as though that many more vendors were selling cards than in the past. The number of tables with autographed items or other forms of memorabilia seemed to be significantly lower than in 2019.

■ Basketball and football cards appeared to generate more interest than baseball cards. There were probably more baseball cards for sale overall, but it seemed like there was more buzz at the tables with basketball and football cards, and they had more people standing around and looking at the displays. Another interesting note is that soccer cards have definitely gained in popularity. I don’t recall seeing a single soccer card at the show in 2001. There may have been a few tables featuring soccer cards in 2019, but since it wasn’t something I was looking for, maybe there were more than I realized at that time. There is no mistaking that soccer cards were much more plentiful this time around — I think I even saw more soccer cards than hockey cards over the weekend.

■ I don’t know the specific attendance numbers, but every VIP ticket package for the show sold out weeks in advance. That may or may not be the first time that has ever happened, but show promoters then created another ticket level that offered none of the VIP perks other than early admission each day (by 30 minutes) for the run of the show and those tickets also sold out quickly.

In terms of things I purchased, I will start by saying that I was hardly a big spender. Many of the items I bought came from bargain bins, known as dollar boxes, but I will share that I splurged on two things.

My first big purchase was a graded rookie card of Fernando Tatis Jr. That is only the second graded card I have ever bought, and I talked the dealer down to 75% of the sticker price.

My other big pickup was a 1989 Upper Deck rookie card of Ken Griffey Jr., which has long been a holy grail item for me. The price of that card has always been just above what I was willing to spend for it at the time, but I found one with a very slight crease in it for $30. It certainly isn’t a gem mint 10, but I had to look very closely to see the imperfection, so I was very comfortable purchasing it at that price. It may not be perfect, but it is beautiful to me.

Finally, the autograph experience was both frustrating and fantastic at the same time. The athlete, or entertainer depending on your preference, that I shelled out some money for was Ric Flair. While I have gotten his autograph in the past, I wanted to have him sign something specific that I acquired recently, so I ponied up the cash.

The only downside is that he was supposed to begin signing at 2 p.m., but he started about an hour late because of a different obligation. It was hard to hear ticket numbers being called unless you were in the direct vicinity of the autograph pavilion, so you could not stray too far away. As a result, I feel like I lost about 90 minutes of the convention, but it was well worth it.

The legendary wrestler was almost too good of an autograph guest. He took his time to write a very legible autograph and interacted with everyone who had paid to acquire his signature. Everybody I talked to was pleased with their experience with the “Nature Boy.”

In the end, I got my item signed — and for the record, he not only gave me the inscription I paid for, but also a couple others that he essentially did for free — so it is hard to complain about the late start and slow-moving line. I will take that tradeoff 100 times out of 100, especially since I have had other experiences where I have gotten a couple letters, symbols or other types of characters scribbled on my item by an autograph guest without them even looking up to acknowledge my existence. Flair was one of the best in the ring and is one of the best with his legion of fans.

The National is now in the books. It was greatly anticipated by collectors from around the country for several reasons and it seemed like it lived up to expectations. Next year it will be held in Atlantic City before returning to Rosemont in 2023.