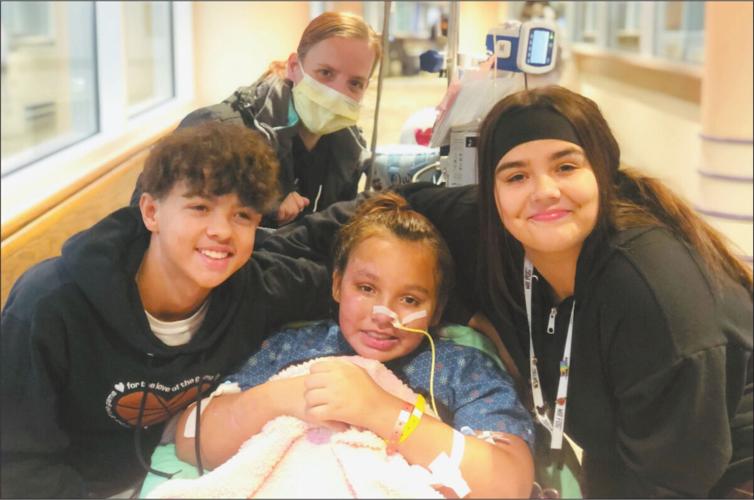 Jaden, Jessalyn and Yeliana Torres and Amber Kohnke (behind) at the hospital. 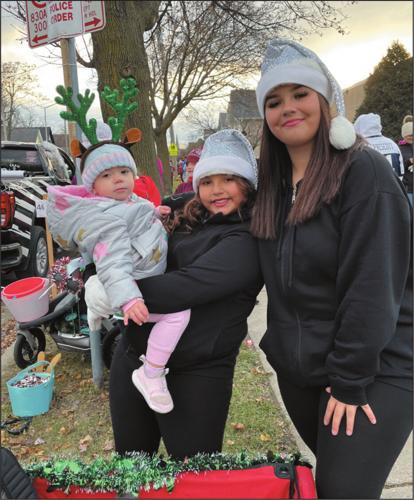 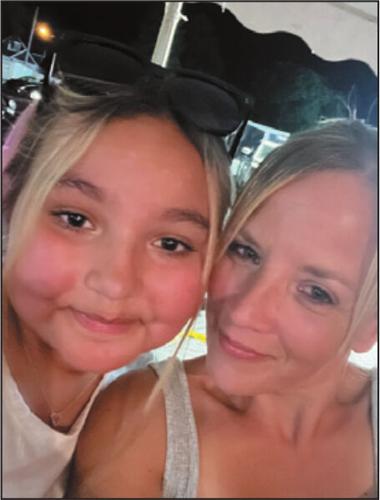 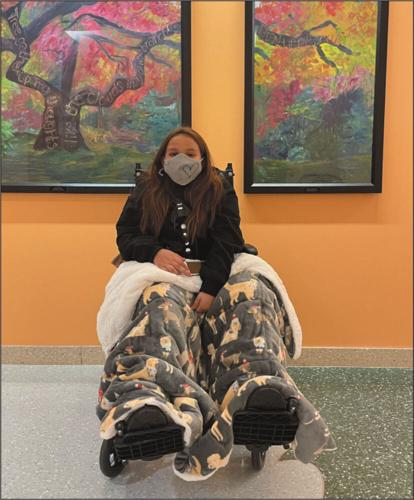 Jessalyn Torres at the hospital after the Waukesha Christmas Parade.

Jaden, Jessalyn and Yeliana Torres and Amber Kohnke (behind) at the hospital.

Jessalyn Torres at the hospital after the Waukesha Christmas Parade.

WAUKESHA — Approximately seven months after Jessalyn Torres was struck in the Waukesha Christmas Parade attack on Nov. 21, she is continuing to heal from her physical and mental injuries and is looking ahead to the future.

The Freeman continues to tell the stories of those injured or killed in the Waukesha Christmas Parade attack. Contact Nikki Brahm at nbrahm@conleynet.com to share your story.

Amber Kohnke, Torres’ mother, and Torres shared some of their journey with The Freeman after another recent hospitalization due to complications from her injuries.

Immediately after the parade, Torres’ injuries included a broken pelvis in three areas (she now has 11 screws and a large plate holding it together); eight broken ribs; three fractured vertebrae; a lacerated liver; a skull fracture; lung contusions; and the loss of a kidney. In addition, the right side of Torres’ face and her body was completely scraped up from road rash and she had a hematoma in her right eye.

After many surgeries and some healing, Torres was discharged before Christmas, but she had to return soon after because she was struggling to breathe. They found out the problem was tracheal stenosis, Kohnke said. Torres’ body was producing so much scar tissue from being intubated that her trachea was starting to close off.

“We struggled with her breathing nonstop,” Kohnke said. “It was hard to do physical therapy when you can’t breathe. Not even just walking, she was in her wheelchair, trying to transfer her from her chair into the car, exerting any type of energy when we would just normally take a little bit deeper of a breath, she couldn’t take a deeper breath.”

They tried many different kinds of treatments — balloon dilations, steroid injections, medications and more. She had nine tracheal surgeries. The only option was a tracheal resection, which was done on May 31.

It was hard for the family to return to the hospital.

Before the surgery, Torres was able to dance again in a March performance.

“It was kind of bittersweet,” she said. “Because I was happy to dance, but, like, not being able to do much, it didn’t really feel like dancing. It just felt like, moving your arms around.”

Torres cannot dance again until she gets the OK from her doctor after the tracheal surgery. She still cannot move her head around completely, or she risks tearing her trachea and not being able to breathe. She should be back to dancing in the next two months, according to Kohnke.

Although Torres looks forward to returning to the hobby, she said she’s also a bit scared.

“I can’t do tricks or anything, so I’m mostly scared of that, where everyone can do that but I can’t still ... I just don’t feel confident with it,” she said.

Also before the tracheal surgery, the family had another scare — necrotizing enterocolitis. Torres’ body was shutting down because gases were not staying in her bowel but going into the lining of her bowel. She was close to needing a bowel resection, which is a very invasive surgery. Fortunately, however, they didn’t have to go that route.

More recently, Torres has been dealing with a lot of stomach and abdominal issues. Among many appointments for physical therapy, she sees an orthopedic physician, a urologist, and will have ultrasounds every year for five years for the loss of her kidney, along with other specialists.

Torres, who will turn 12 on Sept. 7, doesn’t remember a lot from the attack. She was performing with the Waukesha Xtreme Dance Team when the vehicle drove through the crowd.

All Torres remembers is the moment that she turned around and got hit in the chest — everyone had stopped dancing and she was confused, she said. Kohnke was walking with the group of dancers with her two-year-old child.

“I literally stood here, yanked my two-year-old and myself out of the way and I watched the vehicle run over all of the girls, I still suffer (now) from the sounds of all of their bodies getting hit, I just stood there frozen for a minute,” she said. “Then, when I realized what happened, I took off running to go find my other child.”

It took Kohnke awhile to find her daughter, as Torres’ body was thrown away from the site. Kohnke had to run up and down the street to find her.

There wasn’t an ambulance to take Torres to the hospital, but a female officer stopped to help. Torres was loaded into the back of the officer’s SUV and driven to the hospital. Kohnke sat in the back and held Torres’ head.

At the hospital, it was “pure chaos,” Kohnke said. Torres was later transferred to Children’s Hospital by ambulance.

“It was pure hell because I was here with one child that was close to being on her deathbed and then I had other children who were also at the parade and saw and witnessed everything and they needed their mom too and I couldn’t be there for them,” Kohnke said.

When Torres was at Children’s Hospital, she spoke what became a famous line. Kohnke said she was talking with the doctors about Torres’ broken pelvis, when out of nowhere, on the other side of the room, Torres, still in sleep and unable to open her eyes, said, “It’s OK, just glue me back together.”

The statement is a representation of Torres’ strong and stubborn personality.

Torres said she was always very confused, paranoid and scared at the hospital. She didn’t like it when the doctors would come into the room because she was afraid there would be bad news.

Torres also remembers receiving a thank-you for saving a girl on the dance team.

“I guess I pushed her away, I think it was to probably move them in formation, but I guess me moving her into the right formation saved her life,” she said.

Torres didn’t know the car was coming, but she feels good to know she saved the girl’s life.

The family also calls Children’s Hospital their “second home.” Employees at Children’s often stop Kohnke to inquire how Torres has been doing, which means a lot to the family. People also often offer to buy Torres items from the gift shop.

The family is extremely grateful for the community support including all of the meals and items that were dropped off when Torres was in the hospital and since then. Overall, Kohnke said, the support has been amazing.

“I want to express how thankful we are for everybody who has reached out and helped in some manner,” she said. “Even the smallest gestures have been helpful in some form, in some way.”

Recently, the family went to the St. Mary’s Festival, and many people approached them offering words of support and offering to purchase the kids items. Kohnke said the money given by the United For Waukesha Community Fund was unexpected and extremely helpful. Kohnke, a surgical technologist and single mother, went from working a full-time job to a caretaker for Torres and her children.

Kohnke said that although she took her kids to and from their activities, she feels she missed out on “bonding time.” Now, she’s focused on having as much bonding time as they can before she returns to work full-time.

When Torres is able, she looks forward to swimming again at Buchner Park and Pewaukee Lake and tubing with family. They’ve been having family grill-outs at home and may attend the July 4 parade in downtown Waukesha.

“I like being downtown,” Torres said. “I don’t really get scared because I don’t remember anything.”

However, the family is struggling with PTSD.

“For me, a lot of things make me very anxious now, but mostly, the main thing is if I’m walking on the sidewalk and a car passes me I get really scared, or if there’s a car with a really loud (muffler) and it just scares me,” Torres said.

“I still have, what I can describe as lightning bolts, whenever I hear noise or a car loud when I’m driving or walking, like a lighting bolt struck me,” Kohnke said.

After this summer, Torres will be going to Horning Middle School.

Torres and Kohnke ask the public not to gawk or make hand gestures at Torres’ scars.

“Even though you see this (neck) scar, it doesn’t mean I’m in pain,” Torres said.

“She has scars and injuries that she’ll have to live with for the rest of her life, unfortunately, and she doesn’t need that kind of negative energy,” Kohnke said.

Kohnke said she has to remind Torres that there are more years to come where she can enjoy all of her favorite activities when her body is able to.

Torres’ message to the community is: “I’m getting a lot better, but we just have to take it one day at a time, so it might be a little bit of a process but the process will be worth it in the end.”

For the latest news on the Waukesha Christmas Parade tragedy, click here.