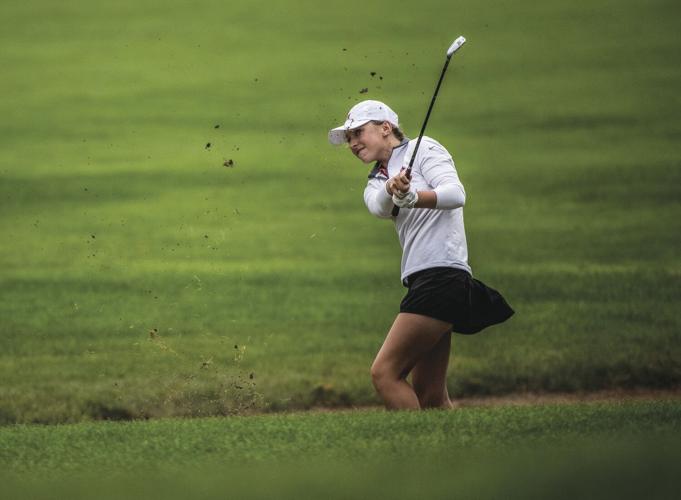 Julia Larson of Arrowhead hits her ball out of the two-hole sand bunker at Broadlands golf course on Wednesday. 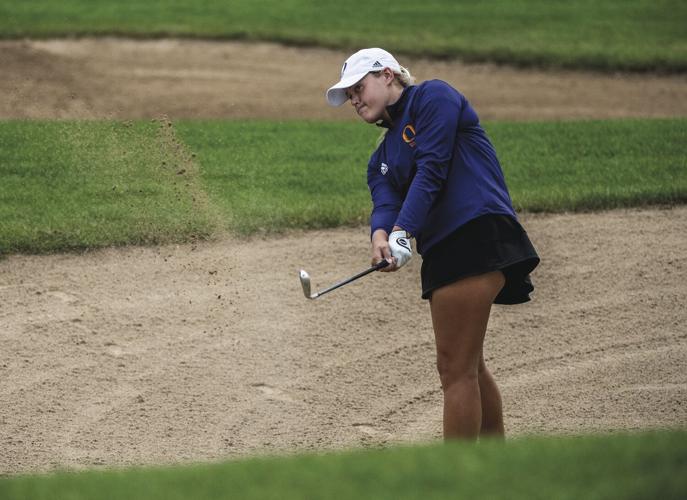 Lauren Lupinek of Oconomowoc hits her ball out of a sand bunker on the two-hole fairway at Broadlands golf course.

Julia Larson of Arrowhead hits her ball out of the two-hole sand bunker at Broadlands golf course on Wednesday.

Lauren Lupinek of Oconomowoc hits her ball out of a sand bunker on the two-hole fairway at Broadlands golf course.

NORTH PRAIRIE — The message was simple.

Don’t worry about your opponent.

Focus on you — and only you.

“We just needed to play well for us,” Arrowhead girls coach Ryan Andrews told his team before the Classic 8 Conference tournament Wednesday morning. “Don’t worry about what anyone else shoots.

“If Oconomowoc or someone else has a great day and can beat us, we’ll shake their hand and congratulate them. But we can’t control that … so we just have to play our game.”

Arrowhead did exactly that.

The Warhawks and Raccoons entered the conference tournament tied atop the league standings. And in a winner-take-all battle at Broadlands Golf Club, Arrowhead did just what its head coach asked.

The Warhawks shot a 332 and edged the Raccoons (339) for the conference tournament title and the overall league championship. Arrowhead finished with 56 points and won the conference for a third straight year, while Oconomowoc was a close second with 54 points.

“I think we definitely did amazing as a team,” Arrowhead senior Julia Larson said. “We knew It was ‘pound time.’ We all knew what we had to do to win.”

Lupinek also won conference Player of the Year honors and was joined on the first-team by Larson, Kaiser and Kaitlyn Amtmann of Arrowhead, Westbrook and Cerroni.

“This really means a lot,” Lupinek said. “I really didn’t like golf very much as a freshman, but I stuck with it and I’ve seen what hard work can do.”

Lupinek and her pals were hoping to knock the Warhawks from their lofty pedestal atop the league. But Arrowhead proved impossible to dethrone.

Per usual, the Warhawks leaned on their gifted senior trio of Kaiser, Larson and Amtmann — who finished sixth with an 83. The Warhawks also overcame the loss of sophomore No. 4 golfer Alexa Reed — who withdrew with an illness — and got an 88 from junior Lia Maxwell.

“We dealt with a little adversity there and I thought the girls really stepped up,” Andrews said. “We had a mindset that we really believed we could do it and that’s what the girls did.”

Each and every Warhawk pulled their weight.

Kaiser birdied two of her final six holes and shot a 38 on the back nine. Larson stayed out of trouble most of her round and finished with 11 pars.

Amtmann’s day was highlighted by a birdie at the par-4, fifth hole. And Maxwell finished with a bang, making a birdie at No. 17 and shooting a 42 on the back nine.

“I just think the whole team stepped up,” Larson said. “There was a harsh wind at times, but we hung in there and did great.”

The same could be said of Lupinek — not just Wednesday, but during her entire golfing journey.

Lupinek comes from a golfing family, but was ready to give up the game a few years back.

“I played in a (Junior PGA) tournament as like a sixth grader and shot like a 130,” she said with a laugh. “I didn't play for two years. I hated the game. I didn't start playing again until COVID because there wasn’t anything else to do.”

Today, Lupinek is one of the state’s top golfers, and she can’t imagine life without the sport.

Lupinek was a model of consistency Wednesday, making 15 pars, one birdie and two bogeys, She also hit 15 greens in regulation.

At the par-4, third hole — a slight dogleg left — Lupinek hit a 7-iron off the tee, then hit a hybrid from 160 yards just off the green. Lupinek then drained a 20-foot birdie putt that jumpstarted her day.

“That was crazy, really unexpected,” Lupinek said of her birdie. “I had a few other lip-out birdies that would have been great. But overall, it was a really good round.”

Lupinek has had plenty of those this year, thanks in large part to an offseason of intense training.

Lupinek and her family rented a home in Las Cruces, NM, for two months last winter. That allowed Lupinek to focus on golf, while attending school virtually.

Now, after missing state by just one shot last year, Lupinek seems poised to make a run at an individual state title next month.

“I think it really helped a lot,” Lupinek said of spending her winter in New Mexico, something she’ll do again in 2023. “I had a great coach and could really concentrate on my game. It definitely paid off and gave me a lot of confidence.”

The Warhawks certainly have a lot of confidence, too.

Now, with the postseason set to commence next week, Arrowhead hopes to build on what it accomplished during a thrilling Classic 8 season.

“I think we’re battle tested,” Andrews said. “I think some of our toughest competition is from our conference and we’re confident with some of those matchups. So we’re really excited.”