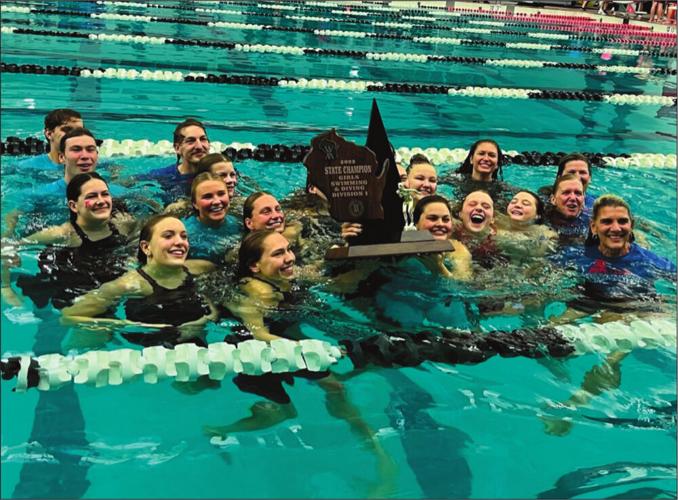 Arrowhead’s girls swimming and diving team poses with the first-place trophy after winning the Division 1 team title during the WIAA Girls State Swimming and Diving Championships Saturday at Waukesha South. 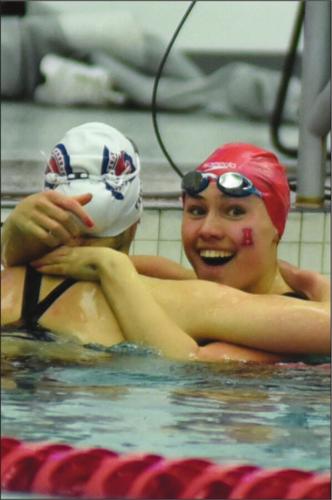 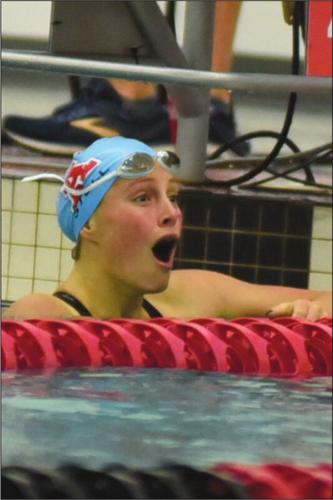 Arrowhead senior Campbell Stoll looks at her cheering section in shock after breaking the state record in the 200-yard individual medley during the WIAA Girls State Swimming and Diving Championships Saturday at Waukesha South. 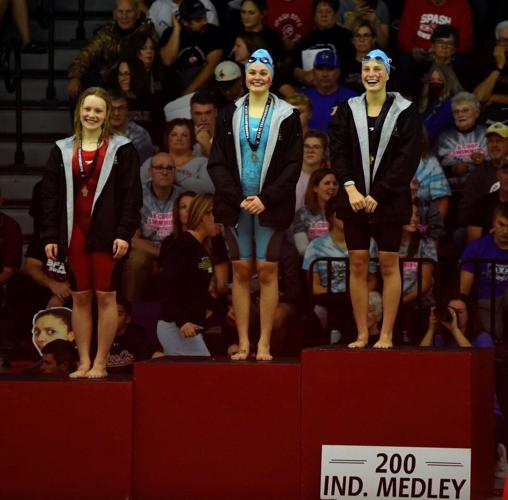 From right to left, Arrowhead seniors Campbell Stoll and Peyton Drexler, and freshman Haley Johnson stand on the podium after finishing 1-2-3 in the 200-yard individual medley during the WIAA Girls State Swimming and Diving Championships Saturday at Waukesha South. 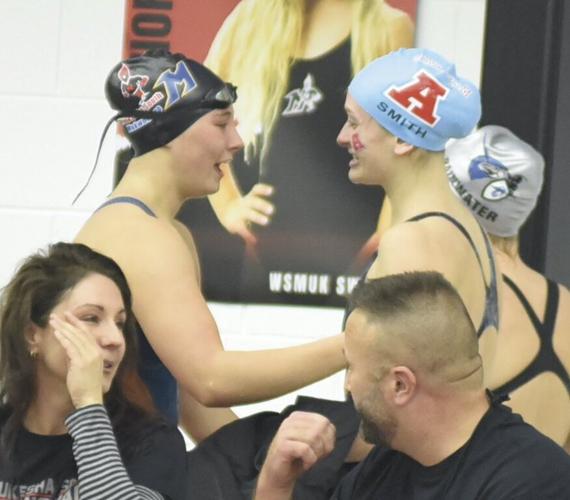 Arrowhead’s girls swimming and diving team poses with the first-place trophy after winning the Division 1 team title during the WIAA Girls State Swimming and Diving Championships Saturday at Waukesha South.

Arrowhead senior Campbell Stoll looks at her cheering section in shock after breaking the state record in the 200-yard individual medley during the WIAA Girls State Swimming and Diving Championships Saturday at Waukesha South.

From right to left, Arrowhead seniors Campbell Stoll and Peyton Drexler, and freshman Haley Johnson stand on the podium after finishing 1-2-3 in the 200-yard individual medley during the WIAA Girls State Swimming and Diving Championships Saturday at Waukesha South.

WAUKESHA — As far as Arrowhead coach Ruth Ann Ahnen is concerned, her team’s journey to winning a state championship began before last season even ended.

In the very first race of the 2021 state meet, the Warhawks’ 200-yard medley relay was disqualified, essentially ending their bid to stop Brookfield East’s reign at the top and snap a run of second-place finishes.

That motivation, coupled with exceptional swim after exceptional swim, led to a record-breaking day at the Waukesha South Natatorium on Saturday. Arrowhead swimmers set three state records en route to denying the Spartans a four-peat by totaling a meet-best 338.5 points at the WIAA Division 1 State Swimming and Diving Championship.

“Words can’t describe it,” Ahnen said. “We’ve been focused on this since last season because we DQ’d that relay, and our four seniors are just a force and a force outside the pool. They developed such a great culture with the young swimmers and I think that’s the difference in the pool today.”

Those four seniors — Campbell Stoll, Hailey Tierney, Peyton Drexler and Francesca Smith — were part of five victories for the Warhawks. Tierney set state records in each of her individual wins, while Stoll three-peated in two events, breaking a state record that stood for five years in the 200 individual medley in the process.

“It’s obviously been four years in the making and to finally get it done to something that I’ve been dreaming about and visualizing,” Stoll said. “Being able to do it with this group of girls is something that I’ve always wanted to do and I’m just really proud of each and every one of us.”

Aside from setting the new standard in and winning the 200 IM by over five seconds with a time of 1 minute, 56.37 seconds — shattering the previous mark of 1:58.13 set in 2017 by Cedarburg’s Lillie Hosack — the Texas recruit also defended her title in the 100 butterfly (51.85), besting second place by nearly three seconds.

“I’ve known Campbell since she was a little girl and her work ethic and just how she she works every day, she’s encouraging to all her teammates,” Ahnen said. “She’s very driven. She’s very focused. She’s one of those kids that never misses a practice.

“I can’t say enough. I’m going to miss them (the seniors) greatly.”

Perhaps no one surprised more than Tierney. Without a state title to her name entering the day, not only did the Wisconsin commit claim two races, but she put her name in the record books in the process.

First came the 50 freestyle in which she and Lucy Thomas each broke the former fast mark set last fall by East’s Abby Wanezek (22.54). Tierney barely out-touched Thomas at 21.84 seconds, while the Brookfield East senior also broke 22 seconds at 21.89.

“I had some hardships throughout the season, for sure, so I think I used that to push me during practice every day,” Tierney said. “Swimming next to Campbell during practice is definitely one of the things that pushed me and I think I just realized I knew my end goals and I knew what it would take to get to those goals.”

One of those hardships was a bout with mono at the beginning of the season, which forced Tierney to work even harder to get where she wanted to be by season’s end. Some words of encouragement from her coach — and an event change — helped push her over the top.

“I told her the other day, ‘You do not know how good you are,’” Ahnen said. “How she trains and the splits that she’s doing in practice would indicate some really great swims, and she’s normally been a backstroker the last three years. We had a long talk about, ‘Should I do freestyle?’ She’s doing a 22.6 at smaller pools. That would indicate that her freestyle was really going to be on.

“Twenty-one is crazy. Her and Lucy, oh my gosh.”

Tierney then went on to break a seven-year-old record in the 100 free by three one-hundredths of a second, touching the wall in 48.52 seconds.

“She chose to do the 100 free and I think it was a really good choice,” Ahnen said. “But her time even surprised me.” Tierney, Stoll, Smith and Drexler also teamed up to win the 200 free relay at 1:31.14, missing out on another state record by just .01. Stoll and Tierney joined sophomore Audrey Worgull and freshman Cate Wisener to take second in the 200 medley relay (1:43.21), Then it was Stoll, Smith, Drexler and freshman Haley Johnson also finishing runner-up in the 400 free relay (3:23.33).

“I think the reason why we could all pull it together today was just because our bond is so strong and we all kind of had each other,” Tierney said. “We’re such a family. We all believed in each other and we knew we could do it.”

The Arrowhead cheering section was sent into a frenzy during the third race of the meet, as not only did Stoll have a record-breaking swim in the 200 IM, but the Warhawks went 1-2-3, with Drexler taking second and Johnson third out of Lane 8.

“This meet was definitely one to remember,” Stoll said. “Just each year having these girls behind me the whole time, I don’t think I’ve ever worked as hard as I’ve worked this whole entire season because I always had everyone pushing me.”

“We saw some of the fastest swimming in the country at the high-school level today,” Ahnen said.

Stoll, one of the fastest swimmers in the country, will go down as one of the greatest in state history after becoming a six-time individual state champion Saturday.

Making the day even more special for Ahnen was the presence of her father, John, who made the drive up from St. Louis to see the Warhawks win their first state title since they went back-to-back in 2014 and 2015. They’ve now won 12 state titles in all and more events than any other school in the state.

“My dad has been to every state meet,” Ahnen said. “He used to volunteer when they had volunteer timers at the (University of Wisconsin) Natatorium. He’s 87 years old today. So this is his birthday present.”