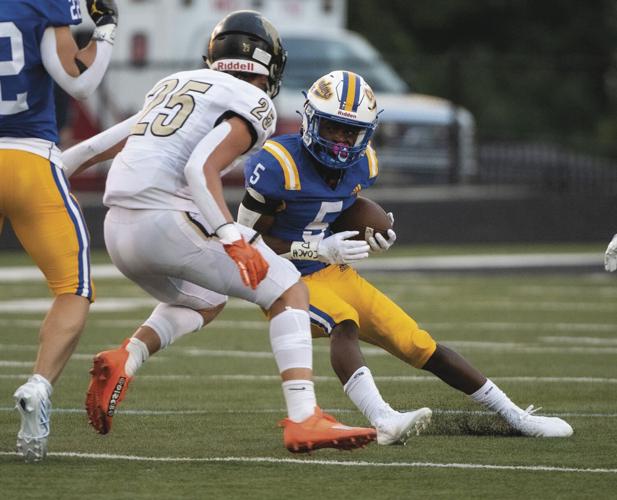 Marvanous Butler of Catholic Memorial looks to avaid getting tackled by Teagan Fox of Franklin. 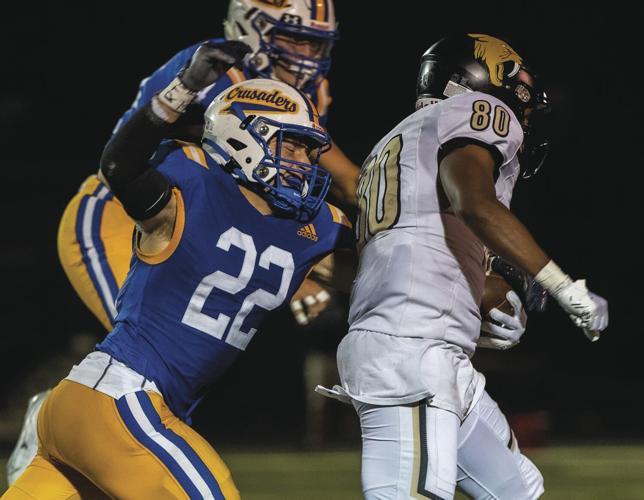 Marvanous Butler of Catholic Memorial looks to avaid getting tackled by Teagan Fox of Franklin.

WAUKESHA — For as illustrious of a coaching career Bill Young has had at Catholic Memorial, he’s never been part of a run like this.

That’s dating all the way back to 1978 when Young took over at CMH, who would soon go on to win its first of four WISAA state titles in 1979. The Crusaders made eight finals appearances as a member of WISAA, and now they’re making their ninth visit to the WIAA state championship game on Thursday when they’ll take on Columbus at 7 p.m. at Camp Randall Stadium for the Division 4 title.

Young has won five gold balls in Madison, including three in a row dating back to 2018 when the Crusaders (13-0) rallied past West De Pere for the Division 3 crown. While aware that a four-peat is on the line when CMH goes for its 28th consecutive victory, that’s the only game that matters to Young ahead of the 512 he’s already coached.

“The old cliche, you want to be 10 each week, and what happened — good, bad or indifferent a year ago, we've been blessed,” Young said. “We’ve had a great run this year. We’ve just got to be dialed in this week.”

There’s good reason for that, as the D4 final is the only of the seven games taking place this week in Madison to feature two undefeated teams. The Cardinals (13-0), champions of the Capitol Conference, also have some added motivation after CMH ended their season in the state semifinals last fall.

“We’re going to go against what I feel is one of the top teams in any division,” Young said. “They are a great ballclub, so well coached, a great running back, offensive line, and they’re going to be a real issue because they are just so deep and they’ve got so much talent on that field.”

So do the Crusaders. There might not be a more dynamic running back in the state than junior Corey Smith, who would have even more impressive numbers than he’s already posted if CMH wasn’t involved in several lopsided games. Smith has 1,209 yards and 24 touchdowns on the ground while averaging 8.3 yards per carry. He’s also caught 21 passes for 323 yards and a pair of scores.

In his first season as a starter, senior quarterback Isaiah Nathaniel has thrown for 1,709 yards and 18 TDs to just three interceptions. His favorite target is senior receiver Bennett McCormick, who’s caught 32 passes for 498 yards and six TDs.

“Coach Young does a fantastic job. He’s a legend in what he does, what he needs to do with those guys to put them in a position to be successful.”

Catholic Memorial isn’t lacking in talent elsewhere, either. Along with Smith, junior lineman Donovan Harbour (6-foot-5, 320 pounds) figures to have a future at the NCAA Division I level. So does senior tight end/defensive end Keith Williams, who has 75 tackles and six sacks this season. Junior lineman Carl Pevey leads the Parkland Conference champs with seven sacks to go with two interceptions, while junior linebacker Matt Miklosy has a team-high 105 tackles.

“It’s a championship game and this is it. There’s no saving for tomorrow because after this game, there is no tomorrow. We’re done.”

Columbus is making its first trip to state since 1996, when it won the second of its two Division 4 championships. And while Smith may be one of the most electric tailbacks in the state, the Cardinals feature one of the most productive ball carriers around.

Junior Colton Brunell is second in the state with 2,711 rushing yards and has found paydirt 41 times on the ground. Not only that, but as a linebacker, Brunell has 93 tackles, 1 1/2 sacks and three interceptions.

“He’s the heart and soul of that team on both sides of the ball,” Young said. “This is my 49th year coaching high school football. He is one of the best running back/linebacker combinations I’ve ever seen. The kid is just a complete hammer.”

The Cardinals can also move the ball through the air. Senior quarterback Nathan Cotter has completed 63.9% of his passes for 1,565 yards and 25 TDs, and he’s also rushed for eight scores.

“He’s thrown the ball extremely well this year,” Young said. “The right side with both the right tackle and right guard are just outstanding players. The receiving corps, all the kids can run and catch, and defensively, they’re a real physical bunch.”

Senior linebacker Malani Aragon has a team-best 140 tackles and 3 1/2 sacks for a Columbus team that averages 48.7 points per game.

“We’re a very fast and physical football team,” said Selgrad, who is in just his second year at the helm. “We obviously run the ball pretty much, but I like our balanced attack. We do have some weapons on the edge and defensively, we like to fly to the ball. We like to hit. We’ve really improved our ability to read and react this year and I really like where we’re at.”

Columbus has won each of its 13 games by double figures, including nine by at least 30 points. It defeated Freedom 32-16 to punch its ticket to state, while the Crusaders opened a 20-0 lead against Two Rivers before holding on for a six-point victory — their closest game since Week 4 against Pewaukee, the defending Division 3 champions.

“Give Two Rivers all the credit in the world,” Young said. “They came back, we didn’t play very well on offense or on defense in the second half, and Two Rivers gave us a great battle.

“But you get out of there, you get a win. We talk all the time — win by one or win by more and for us to get a chance to go back to state and go against an outstanding team in Columbus, our kids are excited about the competition ahead of us.”

Should CMH complete its second straight unbeaten season, they’ll be even more excited to give Young and the Crusaders state-title No. 10. But it’s all business up until the clock hits zero.

“The task at hand right now, we just have to be really dialed in and play our very best against a great Columbus football team,” Young said.