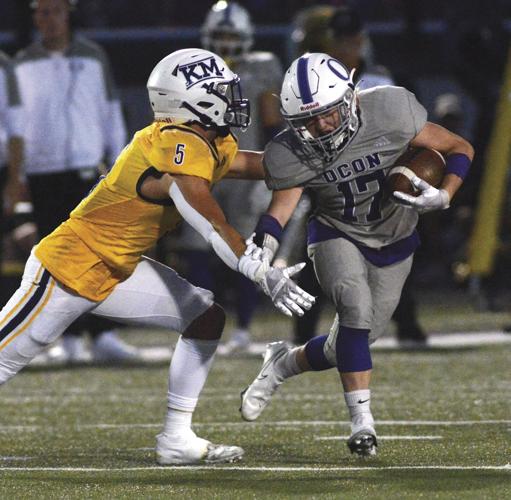 Oconomowoc junior Hunter Hood finds room to run before he's tackled by Kettle Moraine junior Jonathan Ksobiech in the first half in Oconomowoc. 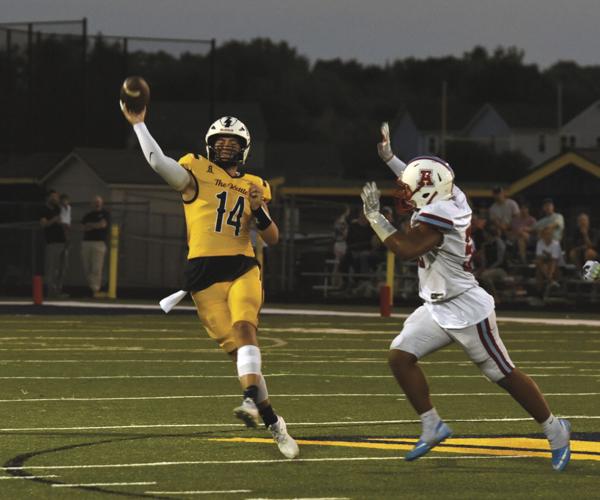 Oconomowoc junior Hunter Hood finds room to run before he's tackled by Kettle Moraine junior Jonathan Ksobiech in the first half in Oconomowoc.

WAUKESHA — Defense wins championships, and Kettle Moraine has a pretty darn good one.

It’ll have to be at its best once again to win its first state title in 34 years.

The Lasers are back to Camp Randall Stadium for the first time since 1988 after edging Brookfield Central 7-0 last week. Now they travel west to take on West De Pere for the WIAA Division 2 state championship Friday at 1 p.m.

“We’ve been playing really good defense down the stretch,” KM coach Matt McDonnell said. “That’s kind of what people have been talking about us with the most.”

And for good reason. The Lasers (10-3), who were the No. 1 seed in their bracket pod, have conceded a total of 13 points in their last three contests. In fact, after three weeks in which its opponents scored at least 21 points, Kettle Moraine has held all but two of its adversaries to seven points or fewer.

“Early on we were still playing around with the defensive scheme a little bit, changed some personnel things and offensively in those early games, we tried to throw the ball a little bit too much and put our defense on the field too often and got into some shootouts,” McDonnell said. “And then between the personnel and kind of tweaking the scheme, the kids have just really been flying around and making a bunch of plays on defense.”

Senior Nolan Schopp has been outstanding in all three phases for the Lasers, racking up a team-high 114 tackles to go with five sacks at linebacker, rushing for 616 yards and nine touchdowns, catching 25 passes for 378 yards and six scores, and even taking a pair of kickoffs to the house.

The 6-foot-2, 225-pound Schopp is listed as a tight end, and while McDonnell always planned to use him out of the backfield down the stretch a la last season, he didn’t anticipate riding him as much as he has thus far.

“We were trying to save his legs a little bit, but I don’t think we thought it would get to the point where he was going to get 20-30 carries a game,” McDonnell said. “We were probably thinking more of the 15carry-ish range. So it’s been a little bit of a surprise.”

Schopp earned all-state accolades at both tight end and linebacker, but he wasn’t alone.

Senior quarterback Chase Spellman has thrown for 1,850 yards and 21 touchdowns, and is also the third-leading rusher on the team with 347 yards and five TDs on the ground. Junior receiver Drew Wagner is a big-play threat any time the ball gets in his hands, as he’s caught 47 passes for 887 yards and nine TDs and also returned three punts for scores.

“They’re a really good team,” West De Pere coach Chris Greisen said. “They’re well put together. They’re diverse on offense. The quarterback and No. 2 (Wagner), he’s super fast and No. 8 (Schopp) is such a playmaker. They run a Wildcat, so they do a lot of different things, so we have our work cut out for us.”

“Sam Coufal might be the best defensive lineman in Wisconsin,” McDonnell said. “He’s going to Miami on a preferred walk-on. Just never stays blocked. He’s relentless — the highest motor kid I’ve ever seen in my life.”

Of course, the defensive weapons don’t end there for the Lasers, who will have to contend with a West De Pere offense that has just once been held under 21 points this season.

As with the Lasers, the Phantoms (12-1) also came just short in the final week of the season of winning their conference — the Fox River Classic North. But after losing its first and only game to Bay Port in Week 9, West De Pere won each of its four playoff bouts by at least 15 points, including two by over 30, despite being a No. 3 seed.

“We talk all the time to our kids — there’s going to be injustice in your life somehow, some way,” Greisen said. “But it’s how you handle it, and you can control two things. That’s your attitude and your effort. And so we felt that yeah, (the seed was) wrong, but we can’t do anything about it except go win the football game.”

The Phantoms will carry that chip on their shoulder into Madison, where they return for the fifth time ever and first time since 2018 when they lost in the Division 3 final to Catholic Memorial. West De Pere won D3 titles in 2010 and 2011.

Junior quarterback Duke Shovald has completed 63.3% of his throws for 2,133 yards and 22 touchdowns. His favorite target is senior receiver Ryder Lesage, who has 53 grabs for 713 yards and six scores. On the ground, senior tailback Najeh Mitchell has racked up 1,679 yards and 27 touchdowns.

“They present a lot of problems on offense,” McDonnell said. “The running back is super, super talented and the quarterback has a lot of skill and he's got good dudes to throw the ball to. But again, it’s high school football. It starts with stopping the run and kind of keeping No. 3 (Mitchell) in as much wraps as we can. He’s a kid who’s obviously going to get his yardage and it’s just trying to limit those explosive plays of out him.”

Senior linebacker Joseph Joiner leads the Phantoms with 115 total tackles, while senior linebacker Thomas Mudd has six interceptions for a defense that limited each of its playoff foes to six or seven points apiece.

West De Pere may have more familiarity with its surroundings in Madison than KM, who defeated New Berlin West for the Division 2 state championship nearly 3 1/2 decades ago. But once the Lasers learned to handle the expectations that came with making a deep playoff run last season and returning a majority of their core pieces, there hasn’t been a team in the state that’s looked better.

“We kind of talked in our first team meeting this year that this was the first year in maybe history, for sure a long time, that Kettle Moraine’s had expectations,” McDonnell said. “We kind of set the standard of expectations have won exactly zero football games in the history of football. Our kids learned that right away when they go over to Fond du Lac and lose a tough battle, so I think they kind of bought into that, too. They knew they were good, but they still had to earn it.”