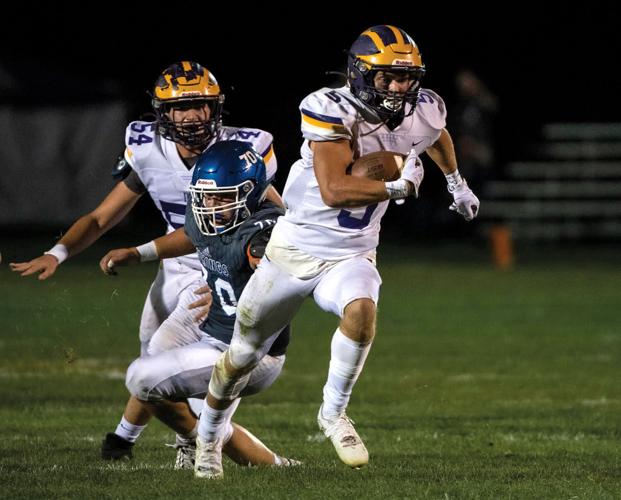 Chase Uhl makes his way past Jake Peterson of West for a touchdown in the first quarter. 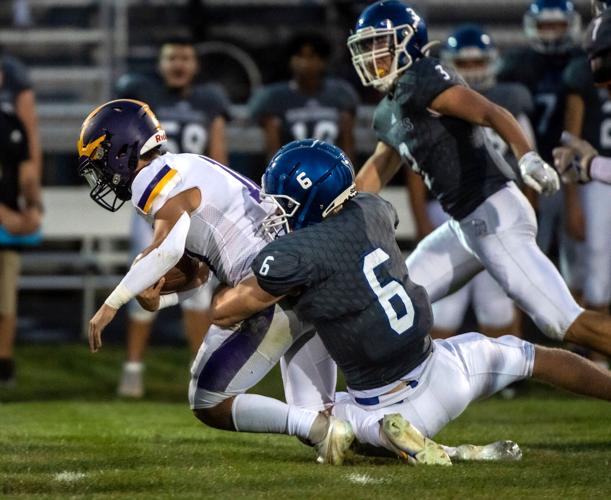 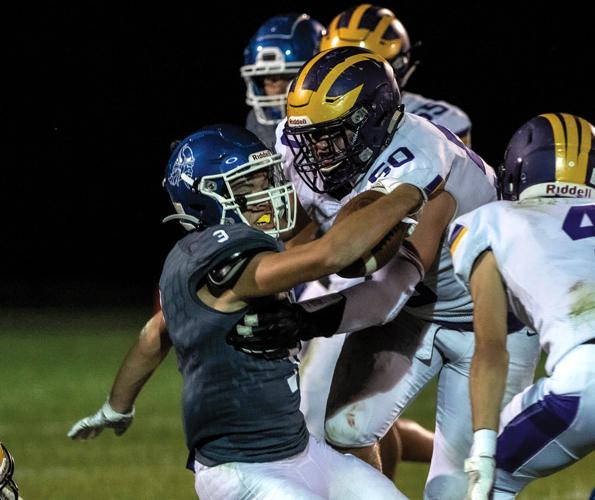 Sam Tsoris of West  gets tossed down by Devon Freitag of IKE.

Chase Uhl makes his way past Jake Peterson of West for a touchdown in the first quarter.

Sam Tsoris of West  gets tossed down by Devon Freitag of IKE.

NEW BERLIN — Not far removed from a trip to Camp Randall Stadium, New Berlin Eisenhower is hoping to rediscover what made it one of the top football programs in the state. Head coach Matt Kern helped the Lions discover that formula in the first place, and he’d like nothing more than to help rekindle that magic.

They aren’t far removed from greatness. In 2019, Eisenhower reached the WIAA Division 3 state semifinals after winning at least a share of the Woodland West Conference for the fifth straight year. That was also the third straight season Ike won at least three playoff games, the first coming in 2017 when it was state runner-up.

Then came a conference change. Then COVID.

But the Lions were able to reach the second round of the D3 playoffs last fall and now look to build on that performance in 2022.

“Numbers are a little bit up,” Kern said. “We’ve probably got about 85 kids across the ranks right now, which is up 15 or 20 from last year.”

More participation means more depth for Eisenhower, who will have about 40 players up on varsity, including 14 returning letter-winners. That group is highlighted by senior quarterback Matthew Collicott, who rushed for 439 yards and four touchdowns last season.

“He’ll also play on defense,” Kern said. “We’re debating between linebacker and safety for him.

“Matt’s growth into the quarterback spot is helping the most with the growth of our offense. He returned to that position last season after not playing quarterback for several years. Now that he’s got a year under his belt, you can see his progression both as a passer and a runner.”

The Lions don’t throw the ball a whole lot and Kern said most offensive concepts will remain the same. Collicott, who also had 35 tackles and a sack, will be joined by senior James Jegler on both sides of the ball. Jegler had 62 tackles, three sacks and two forced fumbles last season.

“James Jegler was one of our leading tacklers last year,” Kern said. “He’ll also be a big part of the receiving game.”

Perhaps most importantly, the Lions should benefit from some continuity on the offensive line, as seniors Spiro Perra and Josh Isbell — both all-conference performers — and junior Tommy Perra are all back. Kern also highlighted senior Addison Tevz, who rushed for 276 yards and also had eight tackles for a loss, including 2 1/2 sacks last season.

“He became a really important ball carrier and linebacker for us, so he’ll be another two-way player for us,” Kern said.

Kern believes seniors Dylan Penner, Chase Uhl and Luke Wagner will step into larger roles and contribute on both sides of the ball.

“Dylan Penner is one kid that lettered last year but didn’t play a ton,” Kern said. “I think he has a chance to really step in and help us on both sides. He’ll be a receiver and defensive back. Chase Uhl, he also lettered but really could see his role expand. He’s going to give it a shot as tight end and defensive end. He had a really good offseason. Luke Wagner, we’re definitely looking at him to do more on both sides of the ball this year.”

Eisenhower finished fourth in its second year as a member of the Parkland Conference, which produced a pair of state champions last season. It’s a conference that has certainly forced the Lions to raise their game, and they hope to continue to rise in the standings in Year 3.

“I think everybody understands the talent Catholic Memorial has on their roster and the challenges they’re going to present to anyone who plays them,” Kern said. “Pewaukee has done a great job building their program and what they did last year was a tremendous accomplishment. I think Tosa West is a hardened team coming from a tough conference. They had a great year last year. Those teams have earned the right to have the preseason aspirations attached to them.”

Over the past five season in which a traditional postseason has been held, New Berlin West has lived to play a 10th game each time. In 2019, it earned a share of the Woodland West and won its first playoff game in over two decades.

The Vikings have taken a step back since then, but still managed to earn a spot in the Division 3 playoffs last fall despite finishing 3-7 overall and 3-4 in conference. Head coach Ben Chossek, now in his seventh season with West, has his team off and running after a full offseason.

“The kids came in ready to participate and get better,” Chossek said. “They’re excited about the new season. We have a young team in a lot of ways. A lot of times we’re teaching them how to practice. At the same time, the attitude has been great and they’re working really hard.”

While on the younger side, the Vikings still have some returning playmakers on both sides of the ball, led by senior Sam Tsoris and junior Jack Wesolowski. Tsoris had 28 tackles and a pair of touchdown catches, while Wesolowski led West with 641 rushing yards and five TDs to go with 53 tackles and two sacks.

“Sam Tsoris will be a two-way player,” Chossek said. “He’ll play free safety on defense and be a slot receiver/hybrid-type for us. He’s probably the most dynamic player for us. He ran track this spring. Jack Wesolowski is also back as running back and he’ll move to linebacker this year. Incredible work ethic. He played basketball and ran track, and still found time to get his weight lifting in. He came in ready to go.”

The Vikings also have a returning quarterback with varsity experience. Senior Troy Blawat threw three touchdown passes and was also second on the team in rushing with 401 yards and five scores.

“He played both ways at the end of the year as a linebacker and quarterback,” Chossek said. “He’ll return in that role again. He’s really come in ready to go.”

Drew Weis had an injury-plagued junior season but should be a key two-way player for West.

“He’s another senior that will help on the perimeter,” Chossek said. “He’ll play some corner and receiver. We’re looking for good things for him.”

Chossek is also expecting good things on both the offensive and defensive line from seniors Nate Hartung, Evan Tyacke, Kennan Fischer, and Joey Hashek. And after seeing limited action as a sophomore, Tyler Hegarty will take on a larger role at running back and linebacker.

“He really came on at the end of the year,” Chossek said. “He’s really looked good in camp so I’m excited about what he can bring to our team.

“Then a lot of other positions really are up for grabs. We have a talented sophomore class pushing for playing time. We’ve got lot of sophomores and juniors that have really put in the time to be successful but don’t necessarily have the on-field experience, so I’m excited to see what they can do on Friday nights.”

Chossek doesn’t see a whole lot of drop-off for either Catholic Memorial or Pewaukee from last season. Throw in Wauwatosa West and the tradition of New Berlin Eisenhower, and the Parkland is poised to be strong once again this fall.

“I would argue it’s one of best Division 3 conferences in the state of Wisconsin,” Chossek said. “It forces us to really raise our game. We know if we want to compete at the highest level not only in conference but in the area and hopefully the state, we have to do well against teams we play night in and night out. It’s an exciting challenge for us that our kids are taking head on. As coaches, we know we have to be prepared every single week.

Get our prep football coverage all season long with this special, limited-time offer — $44 for a 12 week print subscription: https://gmtoday.com/wfpromo