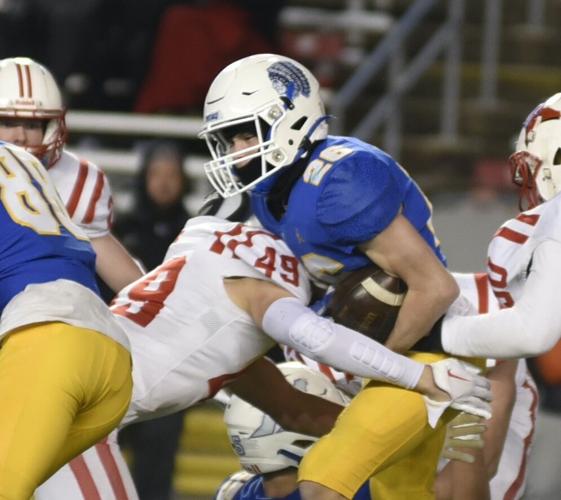 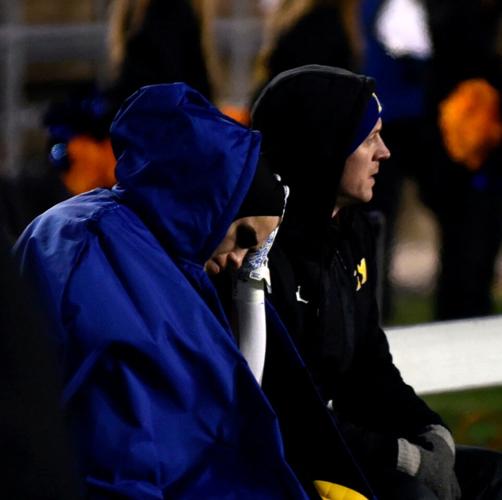 Mukwonago senior running back Wynn Stang sits on the bench after suffering an injury in the first quarter during the WIAA Division 1 state football championship Friday at Camp Randall Stadium in Madison. 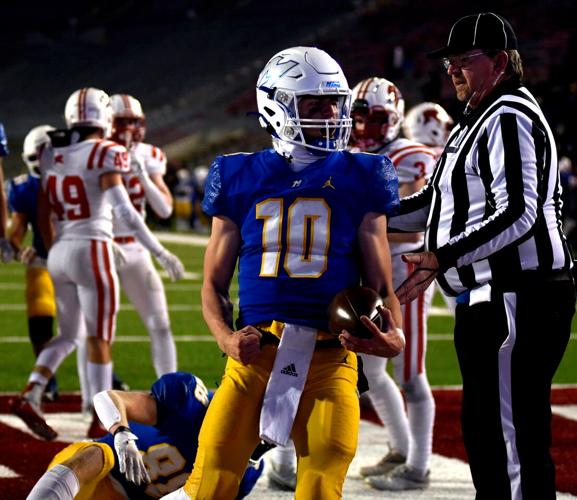 Mukwonago senior running back Wynn Stang sits on the bench after suffering an injury in the first quarter during the WIAA Division 1 state football championship Friday at Camp Randall Stadium in Madison.

MADISON — It became plain to see as the second half transpired that whoever had the football last would leave Camp Randall Stadium with the gold ball.

Kimberly is no stranger to that feeling. It got to experience it again on a frigid Friday evening in Madison.

Senior running back Blake Barry tied a Division 1 state record with four rushing touchdowns, which included the go-ahead 5-yard score with 26 seconds remaining, and Kimberly emerged with a 34-30 victory in a thriller of a WIAA Division 1 state championship game. The Indians had all three timeouts left when they got the ball back, but a desperation throw by senior quarterback Evan Herbig was picked off by junior defensive back Thomas Meyers at midfield to clinch the Papermakers’ eighth state title in program history and first since winning the last of five straight from 2013-17.

“I’m proud of all these boys, coming home with a ball,” said Herbig, who was outstanding under center for the Indians in their first trip to state since 2004. “This is the second time for one to come home from anyone. From all the summer times, waking up at 6 a.m. to work out and do drills ... I definitely love them like a brother. I’m going to miss everyone.”

The overlying narrative entering Friday was the battle of two heavyweight offenses led by their respective standout tailbacks.

Barry would wind up getting the spotlight all by his lonesome.

On his second carry of the game, Mukwonago senior Wynn Stang was stopped for a 5-yard loss, and it was the last time he would step foot on the field as he suffered an apparent collarbone injury. That took the state’s leading rusher entering the week out of the equation, and yet the Indians (12-2) never stopped fighting.

“We had to overcome a tremendous amount of adversity, losing Wynn that first series, and for them to battle back the way that they did, I couldn’t be prouder,” Mukwonago coach Mike Gnewuch said. “This is that senior class. One guy goes down, they try to rally around them and they fight like crazy.”

In fact, Mukwonago would wind up completing that opening drive with a touchdown. It was kept alive by a fourth-and-7 completion to senior receiver Mason Rybolt. On the very next play, Herbig kept it himself for a 5-yard score, putting the Indians in front 7-0 with 8 minutes, 5 seconds left in the first quarter.

“I know we could,” Herbig said when asked if he believed his team could still win without Stang. “We had to change our gameplan a little bit. Our senior running back went down on the first (drive). That was the difference.”

Just as Mukwonago’s initial gameplan was to feed Stang early and often, Kimberly instituted the same strategy with Barry.

He carried the rock eight times on the Papermakers’ opening drive, punching in a 1-yard touchdown with 2:22 left in the first to even the score. But Kimberly (12-2) was kept out of the end zone for the remainder of the half, and that was despite forcing and recovering a fumble at the Mukwonago 24yard line early in the second quarter, as the Indian defense held strong and forced a turnover on downs.

Sophomore Mason Radobicky would then assume top duties in the backfield, and he made the most of it. He and Herbig combined for eight rushes for 75 yards after getting the ball back, and Herbig’s second of three rushing TDs on the night made it 14-7 at the 5:20 mark of the second.

Radobicky finished with 13 carries for 75 yards.

“It’s hard to replace (Stang),” Herbig said. “Mason Radobicky is a good player and I’m happy that he got some reps and got some experience. I thought he played well. We just didn’t finish it.”

In the second half, Mukwonago and Kimberly went blow-for-blow.

No matter, as the Indians responded with a 10-yard touchdown run by Radobicky after Herbig completed passes of 22 and 12 yards to Rybolt and senior receiver Trevor Bouche, who also had an impact on defense and in the return game. The extra point was blocked, leaving the score 20-14 in favor of Mukwonago.

“There’s no question in my mind that these kids would battle all night long for as long as they’d continue playing,” Gnewuch said.

Kimberly’s offense went back to work, as Barry’s 3--yard touchdown and the ensuing extra point put the Papermakers back in front, 21-20. Then after a nice return by Bouche, the Indians kept the see-saw battle going when junior place kicker Ryan McCormack was good from 33 yards out, and it was 23-21 with 11 minutes to play.

Mukwonago tried an onside kick but to no avail, setting up Kimberly with a short field. It took advantage, as Barry punched in touchdown No. 3 on the game. Miron’s throw on the two-point attempt was broken up, and the Papermakers led 27-23.

This time Radobicky got a majority of the workload, racking up 40 yards on six carries and preluding Herbig’s third rushing score of the night, this one from one yard out.

“Maybe we saw a little bit of a change in the guard with Wynn graduating and Mason stepping in,” Gnewuch said.

Plenty of time for Barry and Co.

Kimberly expertly used the clock to its advantage, only facing one third down on its championship-winning drive and milking it down to inside a minute to go. It used its only timeout with 30 seconds left after converting a second and 1, and out of the break in action, Barry marched in his go-ahead TD.

Herbig shouldered more of the workload on the ground as well as in the passing game without Stang in the fold. He rushed 14 times for 105 yards and completed 14 of 18 passes for 131 yards in a valiant effort. Senior linebacker Riley Fischer led the Indians with nine tackles. Mukwonago bids farewell to a 23-man senior class.

“They’re great young men,” Gnewuch said. “I’m so proud of them for everything that they’ve done. Let’s just not wait 18 years to come back here again — that’s kind of what I told them here. The younger guys ... the roadmap has been written by our upperclassmen. We talked all year about creating a legacy and building a legacy, and they certainly did.”