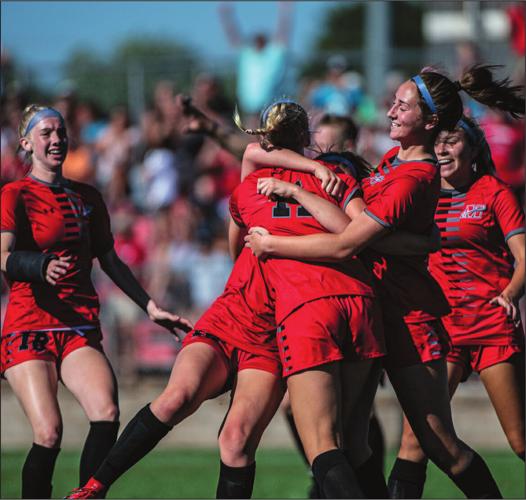 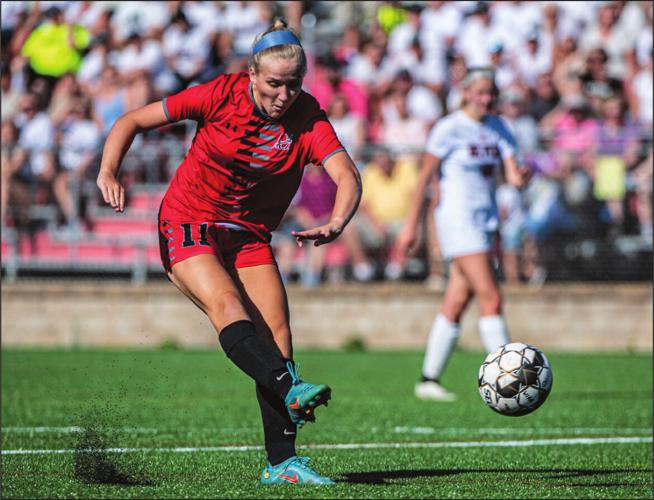 Anna Sikorski of Muskego kicks the ball for Muskego’s first goal of the game during a state semifinal game against De Pere.

Anna Sikorski of Muskego kicks the ball for Muskego’s first goal of the game during a state semifinal game against De Pere.

MILWAUKEE — To ensure that history wouldn’t repeat itself, Lance Matthews turned back the clock.

Matthews, the girls soccer coach at Muskego, led the Warriors to a WIAA Division 1 state title in 2019 when they were the No. 4 seed. That year, Muskego upset top-seeded Waunakee in the state semifinals on its way to an eventual state championship.

Fast forward to 2022 where the Warriors were now the No. 1 seed. So to make sure his side didn’t take fourth-seeded DePere lightly, Matthews had a handful of players from the 2019 team FaceTime his current group.

“Seeds really don't mean anything,” Matthews said. “And we called in a little motivation from some previous players from the 2019 team. And they told the girls it’s anybody’s game on any given night. You’ve got to fight for what you want and earn everything.”

Today’s Warriors got the message loud and clear.

Muskego dominated its state semifinal and rolled past the Redbirds, 2-0, Thursday afternoon at Uihlein Soccer Park. Sophomore standouts Anna Sikorski and Maggie Mattek — the Warriors’ two leading scorers — both scored a goal and Muskego held a 19-2 advantage in shots.

The Warriors won their seventh straight game and improved to 17-1-3, while DePere had its eightgame winning streak snapped and finished the season 21-3-3.

Muskego will now take aim at the second state title in school history when it faces third-seeded DSHA Saturday at 1:30 p.m.

“We’re never looking ahead because you never know what can happen with a game,” Mattek said. “We were talking about the 2019 team and no one expected Muskego to win it that year. So it’s all about effort and going full out.”

Sikorski agreed. “We didn’t want to be like, ‘Oh, we’re the (No. 1) seed and we’re going to win for sure,’” said Sikorski, the Warriors’ leading scorer. “That’s what the (2019 players) reminded us. You just can’t look past anybody.”

The game was played in 88-degree heat that felt much warmer due to the steamy turf field. In addition, the wind gusted between 20 and 30 miles per hour throughout, which knocked the scoreboard’s power out early in the day.

“We train and we play in everything,” Matthews said. “And we just battled all game and the girls proved to be ready for the challenge.”

Boy, did they ever.

Not only did the Warriors hold a huge edge in shots, they had a 6-2 advantage in corner kicks and had eight shots on goal to DePere’s one.

Muskego controlled play in the first half, despite fighting into the stiff wind. The sides were scoreless, though, when the Warriors finally broke through in the 37th minute.

Muskego freshman Klara Muench set Sikorski up on the right side. Sikorksi then fired a rocket from 10 yards out to the far post that beat DePere keeper Jocelyn Blahnik and gave the Warriors a 1-0 lead.

“Klara played me a really good ball and just set me up nicely to take the shot and I buried it in the corner,” Sikorski said. “I could not have made the goal without Klara.”

Muskego outshot DePere, 5-0, in the first half and held a 4-1 edge in corner kicks despite playing into the wind. So the Warriors were on cloud nine knowing they had the lead and were about to have the wind at their back.

“It was a great confidence booster,” Mattek said of leading, 1-0, at halftime. “It was just like the feeling of ‘we can do this now’ … and I think that brought us up a lot. Then I think in the second half we played really well.”

Boy, did they ever. With the wind as its ally, Muskego controlled possession the overwhelming majority of the second half. Then in the 64th minute, Mattek got the insurance goal the Warriors were looking for.

Sikorski hustled to a loose ball and found Mattek free on the left wing roughly 20 yards out. Mattek sent a blast to the lower right corner, and when Blahnik was a split second late, the Warriors had a 2-0 lead.

“I called for it and that’s the reason (Anna) got it to me,” Mattek said. “She told me after I scored that she didn’t see me at first. So she was glad I called for it.”

DePere tried pushing forward and pressuring the Warriors down the stretch. But Muskego’s defense was rock solid, and keeper Ella Kratochvil needed to make just one save.

The result was just what Matthews and his Warriors visualized before ever taking the field.

You see, Muskego goes through pre-game meditation where it tries relaxing and picturing success. On Thursday, everything played out just the way the Warriors imagined it would.

“The girls face a lot of stress,” Matthews said. “They have a lot on their plate with work and school and everything else. They’re high school athletes and there’s a lot of stresses and we take moments like those to just let them calm down and talk through the challenges.”

Now, there’s just one challenge left for these 2022 Warriors.

And if they continue to play like they did Thursday, they’ll be extremely tough to knock out.

“I think if we keep playing like we have been recently that there’s a high chance we’re going to win,” Mattek said.