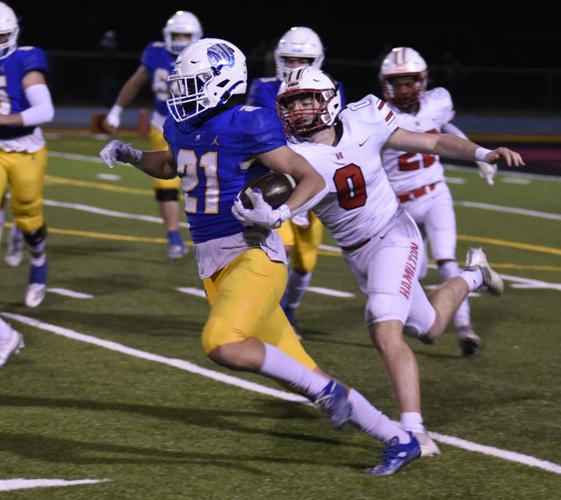 Mukwonago senior running back Wynn Stang gets away from Hamilton senior defensive back Scout Lauer on the edge during a WIAA Division 1 state semifinal football game Friday at West Allis Athletic Complex. 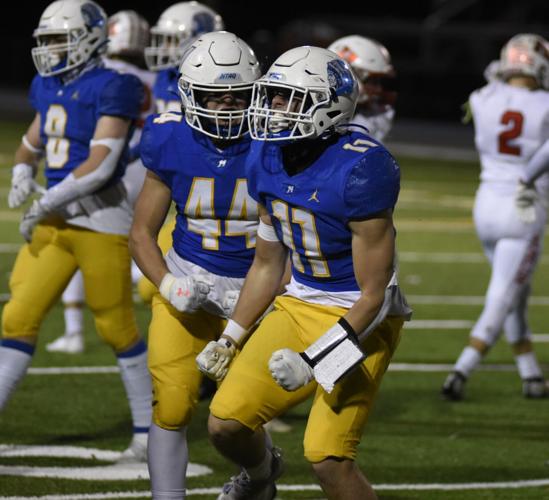 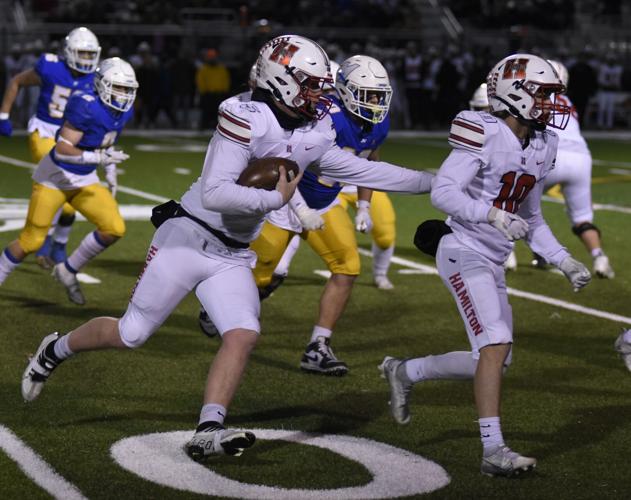 Mukwonago senior running back Wynn Stang gets away from Hamilton senior defensive back Scout Lauer on the edge during a WIAA Division 1 state semifinal football game Friday at West Allis Athletic Complex.

And it’s a good thing, too, because it could have been easy to lose track of how many times the senior running back found the end zone Friday night.

In another dazzling yet workman- like performance, Stang rushed 34 times for 373 yards and six touchdowns, leading the Indians to their first trip to Madison in 18 yards with a 47-21 victory over Hamilton in a WIAA Division 1 state semifinal at West Allis Athletic Complex.

“Seven times, it’s hard to keep track of during the game but then once you really reflect back on it truly shows how great we were today,” Mukwonago senior offensive lineman Wolf Schnabl said.

And Mukwonago was nothing short of great up front, paving the way for Stang’s monster performance.

“I asked him, ‘Are you ready for 80 more carries?’ because we were planning on giving him 40 tonight and 40 on Friday, and he’s like, ‘I’m down with that, coach,’” Mukwonago coach Mike Gnewuch said.

It sure seemed like Stang was on track for at least 40 rushing attempts, as he racked up 14 in the first quarter alone. The Indians (12-1) didn’t waste much time setting the tone, going 90 yards on just four plays, all of which went to Stang. He’d break loose for a 44yard score to make it 6-0 with 9 minutes, 21 seconds to go in the opening quarter.

“It just feels great every time we put in the end zone,” Schnabl said.

Hamilton (10-3), stopped just short of its first state berth since 2000, couldn’t answer as its opening drive went backwards and senior quarterback Nate Kollath punted it away. This time, Mukwonago burned off over 8 1/2 minutes of clock, going 90 yards on 15 plays. That included a fourth and 1 conversion by Stang, who later punched it in from one yard out to push the lead to 13-0 early in the second.

“They did a couple things different defensively than what we had seen on film,” Gnewuch said. “But I’m just proud of our guys up front. We just said, ‘Hey, they’re going to show us some different things. Just trust your footwork,’ and they absolutely did. We were able to control the line of scrimmage and we ran the ball well tonight.”

For as unstoppable as the Indians were offensively, there wasn’t much slowing the Chargers after their uncharacteristic opening possession.

They began their next drive near midfield and marched 51 yards on nine plays, highlighted by a 26yard catch by junior receiver Kyle LaVoy and capped by a fourth and goal run by Kollath that resulted in a 2-yard TD to put Hamilton on the board at the 7:54 mark of the second quarter.

Again, Mukwonago countered as Stang scored touchdown No. 3 from 24 yards out to make it 20-7. But taking over with just under 3 1/2 minutes left in the half, that proved to be just enough time for the Chargers to take momentum into the locker room. Kollath completed five passes for 73 yards on the half-closing drive, including a 10-yard TD connection with senior receiver Lucas Ruiz with 3 seconds to go despite fumbling the snap to put the Indian lead at 20-14.

“We basically preached in the locker room coming out of half, ‘Hey, we need one stop,’ because we felt pretty confident in our offense,” Gnewuch said. “But we knew we needed a stop coming out of the half because they scored at the end of the first half there and we had to regain momentum.”

They would get that game-changing stop just over two minutes into the third quarter.

It came in the form of an interception, as Kollath’s first-down pass was picked by senior linebacker Colin Viola and returned to the Mukwonago 44-yard line.

“That was huge. That was definitely a big turning point,” Mukwonago senior linebacker Riley Fischer said. “We were definitely all hyped after that.

“A lot of ups and downs during the game, obviously, but we just stuck it out, dialed in, did what we had to do and then just delivered when the time was right.”

Stang went back to work, toting the rock four times for 44 yards, including a 3-yard score to push the lead back to 13. Hamilton wasn’t deterred, once again starting with great field position and closing to within 27-21 with 3:50 left in the third on a 13-yard strike from Kollath to Ruiz. But as it turned out, that would be the final time the Chargers found the end zone.

“I was proud of our defense and we knew it was going come down to turnovers and we’ve been pretty darn good all year (being) on the plus side of that,” Gnewuch said.

They’d get another one later on with the game well in hand.

But first, Stang added to his touchdown tally. His fifth came with 1:01 left to go in the third on a 33-yard scamper. Then the Mukwonago defense forced a three-and-out, and this time senior quarterback Evan Herbig kept it for a 16-yard touchdown to make it 41-21 with 7:33 remaining.

“I credit Evan, too,” Gnewuch said. “We put in some ‘Q’ run there and he’s a very effective runner.

“It’s just, we have one back there who’s really good.”

That one back wasn’t quite done, either. A strip-sack by junior linebacker Gage Taugher led to a fumble recovery by senior defensive lineman Connor Loomis, and Stang wasted no time in running in his sixth TD, this one going for 21 yards.

Mukwonago defeated Hamilton 52-28 in the season opener back on Aug. 19. Twelve weeks later, the Indians displayed a similar level of dominance.

“Our coaches told us not to take them lightly because we knew they got a lot better,” Schnabl said. “We couldn’t just walk in and think we were going to roll up points on them, but we kind of did.”

After Stang’s final visit to the end zone, the Indians could start to celebrate.

“We’ve got one more to go,” Gnewuch said. “I’m so proud of our kids. These seniors just refused to be denied. They’re such a tight group and I’m proud that they were able to get this one and have the chance to compete in Madison.”

Kollath, who led the Chargers to their deepest playoff run in 14 years, completed 15 of 25 passes for 175 yards. Junior receiver Nick Kihn caught seven of them for 82 yards.

Mukwonago now heads west to Camp Randall Stadium for the first time since 2004, when it claimed the Division 1 title. It’ll face Kimberly for the gold ball next Friday.

“It’s something you dream about ever since you’re a little kid,” Schnabl said. “We came so close last year and we got it done this year.

“We know we can win and we know we’re there for a reason.”