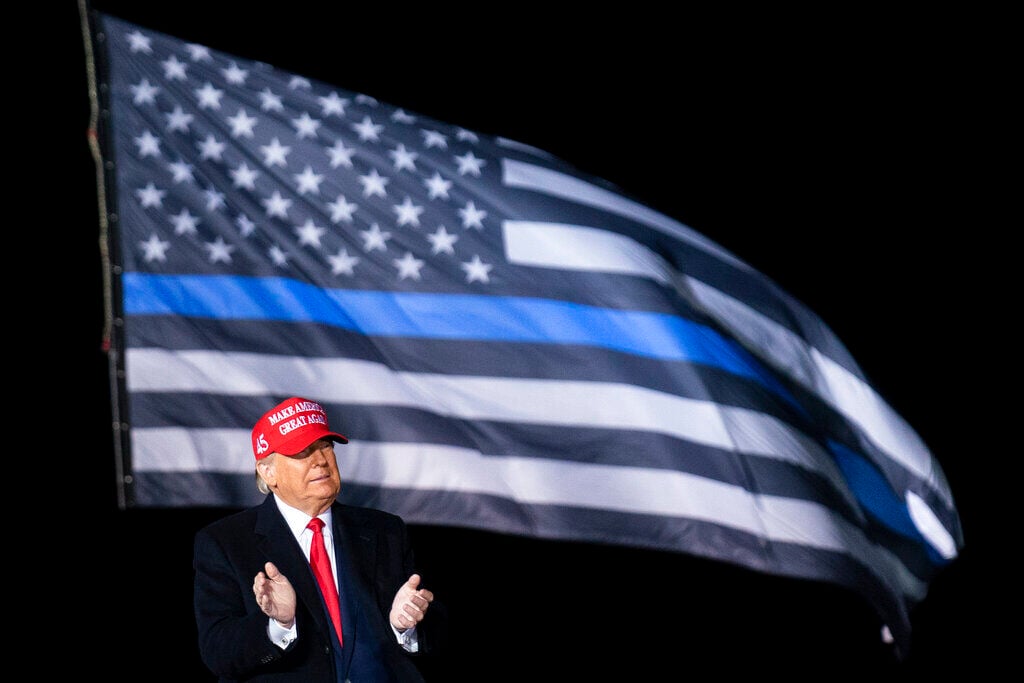 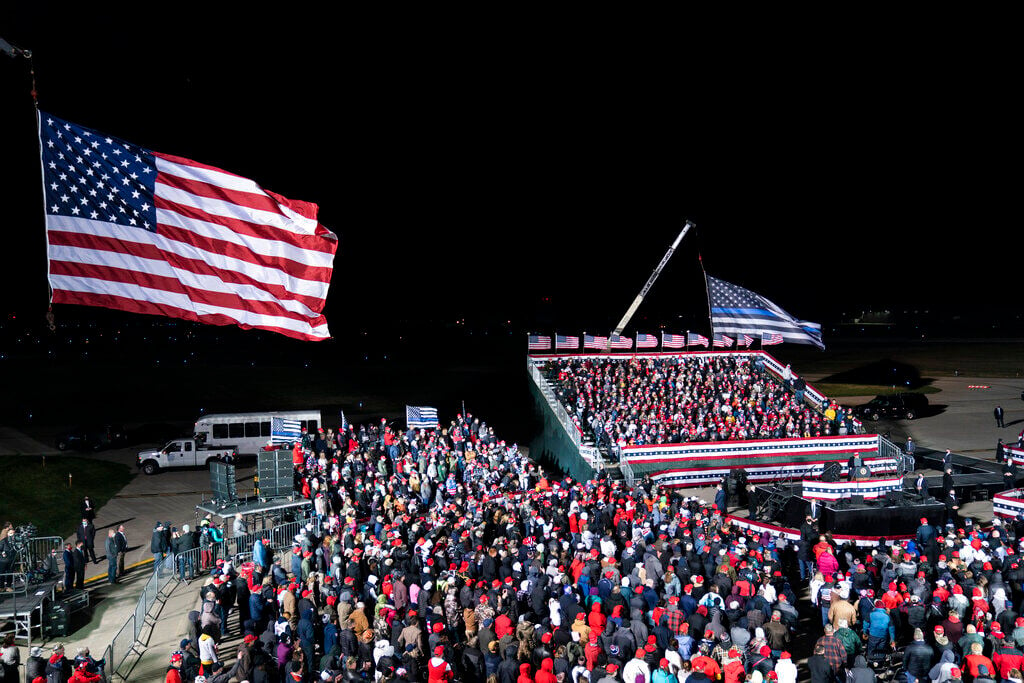 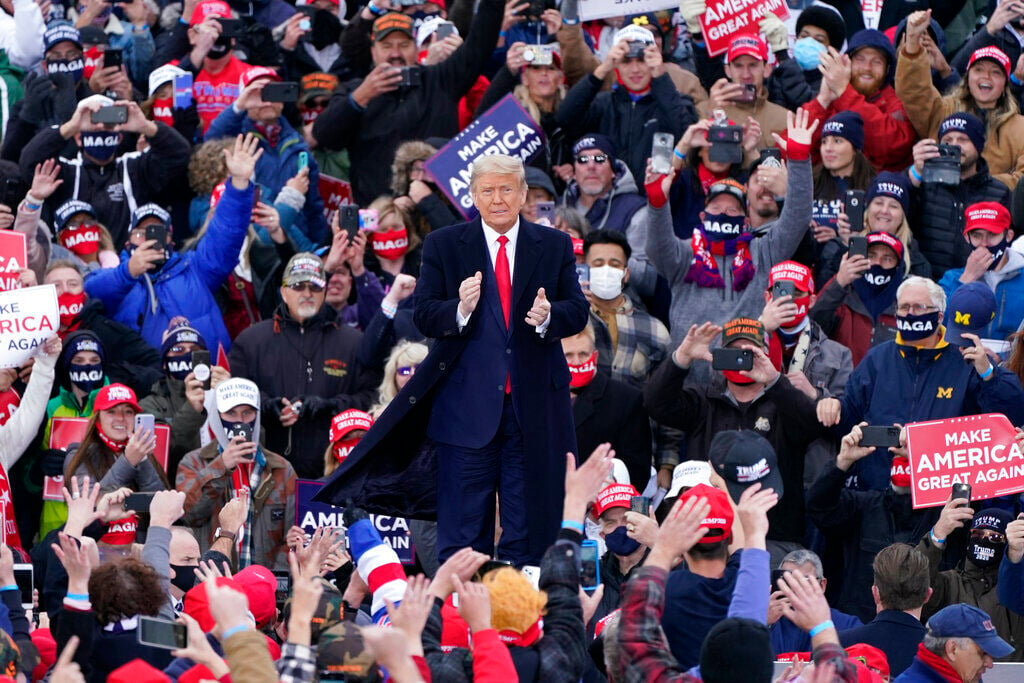 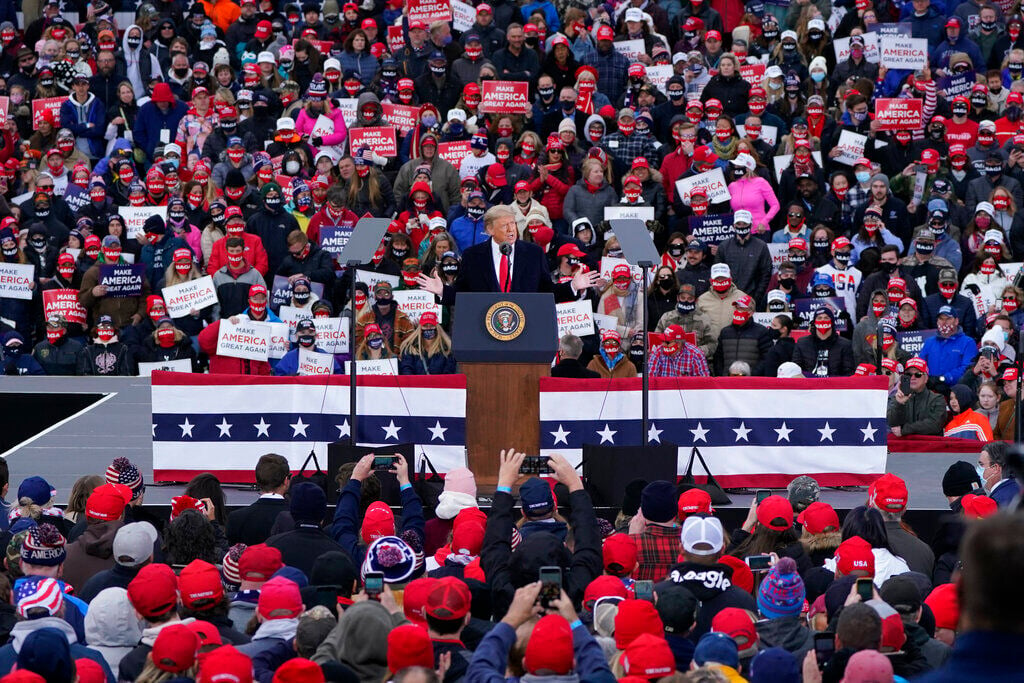 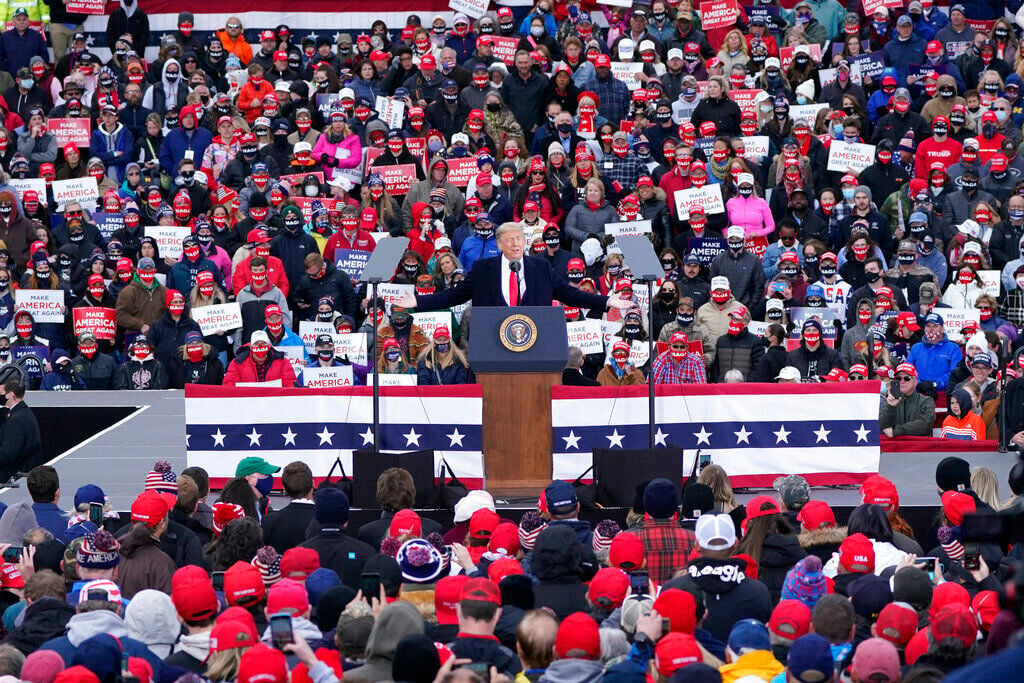 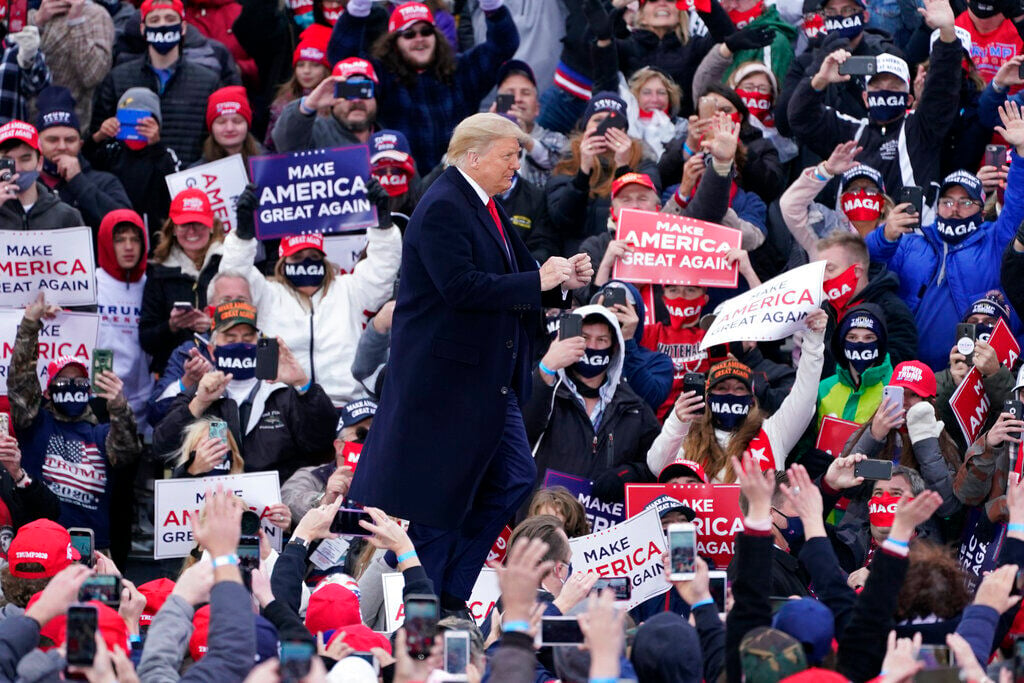 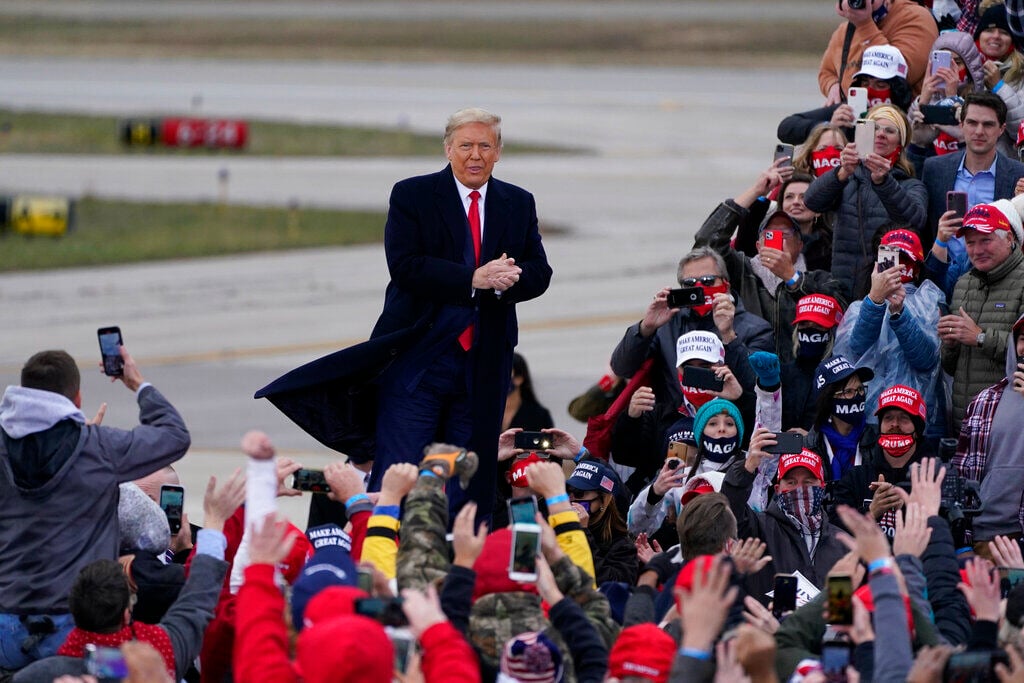 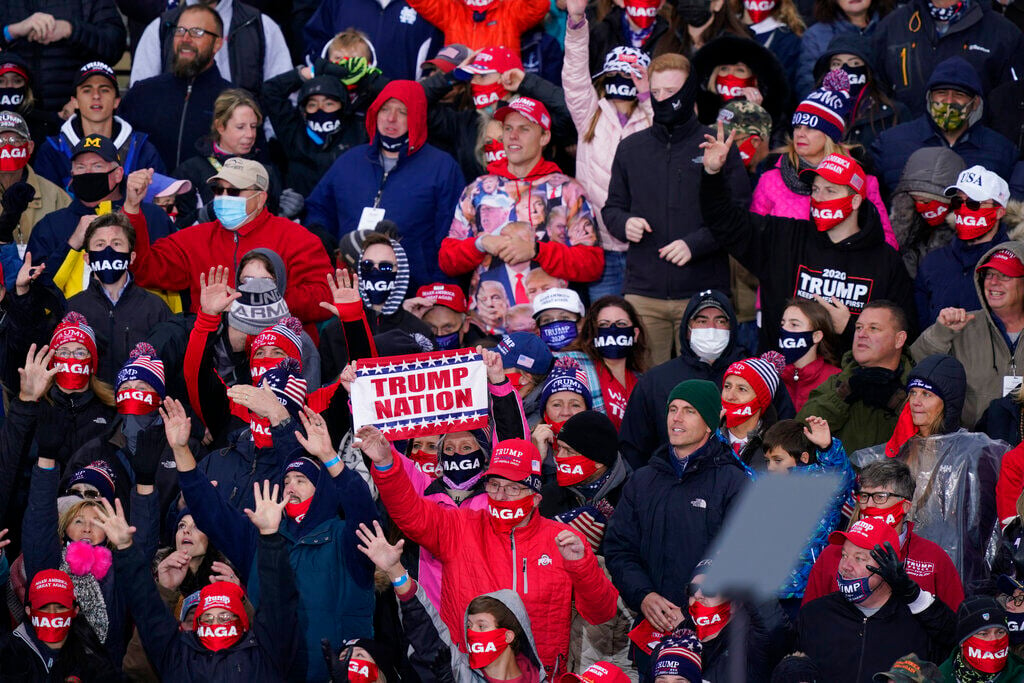 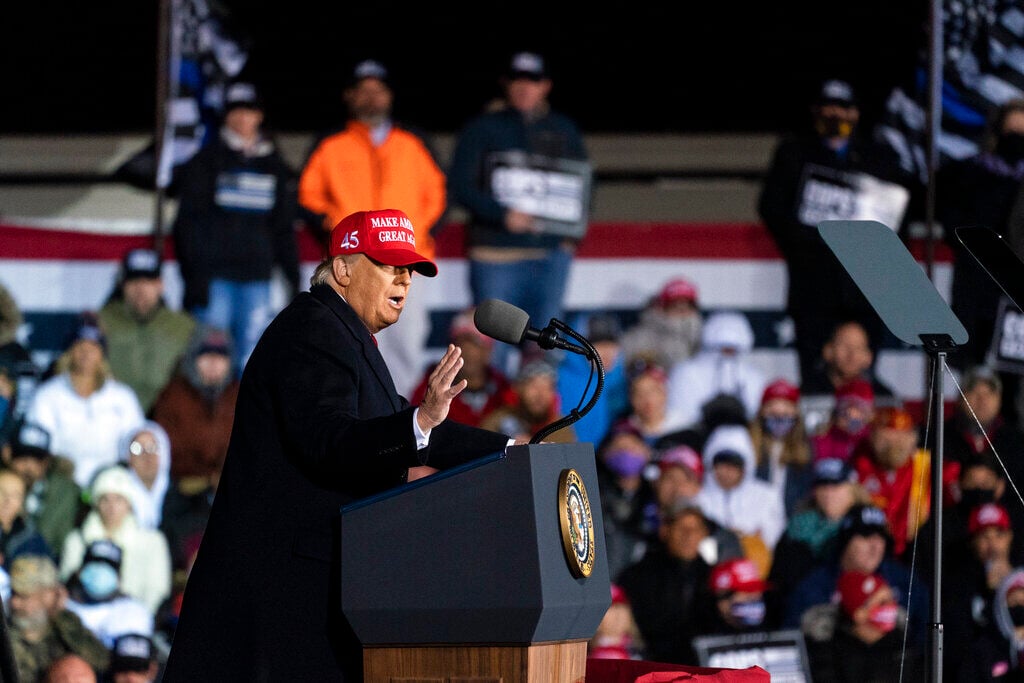 MUSKEGON, Michigan — President Donald Trump leaned into fear tactics Saturday as he accused the left of trying to "destroy the American way of life" in a late reelection pitch to voters in Michigan and Wisconsin — two Midwestern states that were instrumental to his 2016 victory but may now be slipping from his grasp.

In back-to-back rallies, Trump accused the left of wanting to “erase American history" and “purge American values.” He claimed that Democratic rival Joe Biden would put communities at risk.

Trump offered the dark message as he faces headwinds not only in national polling, which shows Biden leading, but also in key battleground surveys. His comments come after his campaign, with far less cash than Biden's, largely retreated from TV advertising in the Midwest, shifting much of its money to Sun Belt states such as Florida, North Carolina, Arizona and Georgia, as well as Pennsylvania.

As he tries to energize his base and keep on-the-fence voters from turning against him, Trump sought to paint Democrats as “anti-American radicals” and said moderates had “a moral duty” to join the Republican Party.

“The Democrat Party you once knew doesn’t exist,” he said.

It was the same on issue after issue, as he claimed that Biden's election would spur “the single biggest depression in the history of our country” and “turn Michigan into a refugee camp."

Addressing the coronavirus crisis, Trump warned that Biden would “shut down the country, delay the vaccine and prolong the pandemic.” Public health experts say the nation would be in far better shape had Trump's administration taken more aggressive action early on.

And while he repeatedly predicted victory, Trump seemed to grapple throughout the day with the prospect that he could indeed lose in November.

In Michigan, he quipped that, in January, he "better damn well be president. In Wisconsin, he wondered how he would process a loss.

"Can you imagine if I lose? I will have lost to the worst candidate in the history of American politics,” he said. "What do I do?”

Trump has continued to hold rallies despite the threat of the coronavirus, which hospitalized him for several days earlier this month.

Wisconsin broke the record for new positive virus cases on Friday — the third time that’s happened in a week. The state also hit record highs for daily deaths and hospitalizations this past week.

But there was little evidence of concern among the thousands of supporters Trump drew in both states, where audience members stood closely together in the cold, mostly without masks.

Trump continued to call on Michigan Gov. Gretchen Whitmer to roll back restrictions that remain in place to try to halt the spread of the virus, prompting the crowd to break into a “Lock her up!” chant. (The same chant also broke out after he mentioned his 2016 Democratic rival Hillary Clinton and Minnesota Rep. Ilhan Omar.)

Whitmer, a Democrat, was the focus of a kidnapping plot by anti-government extremists who were angered by lockdown measures. Thirteen men have been charged in connection with the scheme, which included plans to storm the state Capitol and to hold some kind of trial for the governor.

“You got to get your governor to open your state and get your schools open. The schools have to be open, right?” said Trump, who also took credit for federal law enforcement’s role in foiling the plot.

“Every single time the President does this at a rally, the violent rhetoric towards her immediately escalates on social media,” she tweeted. “It has to stop. It just has to.”

Biden, meanwhile, had no public events planned for Saturday. But in a memo to supporters, campaign manager Jen O'Malley Dillon warned about becoming complacent.

“The reality is that this race is far closer than some of the punditry we’re seeing on Twitter and on TV would suggest,” she wrote in the memo, a copy of which was obtained by The Associated Press. “If we learned anything from 2016, it’s that we cannot underestimate Donald Trump or his ability to claw his way back into contention in the final days of a campaign, through whatever smears or underhanded tactics he has at his disposal."

Trump has an aggressive campaign schedule in the coming days, with rallies planned Sunday in Nevada, Monday in Arizona and Tuesday in Pennsylvania.

But Trump's schedule suggests concern. On Friday, he campaigned in Georgia — a state no Republican presidential contender has lost since 1992 but where polling shows Trump and Biden in a tight contest. Trump also has had to court voters in Iowa, which he carried by almost 10 percentage points four years ago.

The latest campaign fundraising figures from the Trump team suggest he's likely the first incumbent president in the modern era to face a financial disadvantage. After building a massive cash edge, his campaign spent lavishly, while Biden kept expenses low and benefited from an outpouring of donations that saw him raise nearly $1 billion over the past three months. That gives Biden a massive cash advantage with just over two weeks to go before the election.

Trump on Saturday claimed that he would be “the greatest fundraiser in the history of politics” if he tried, but didn't want to make calls and didn't need the money.